The 45th U.S. President is off to a Running Start by getting more Foreign Companies to Invest in the U.S. 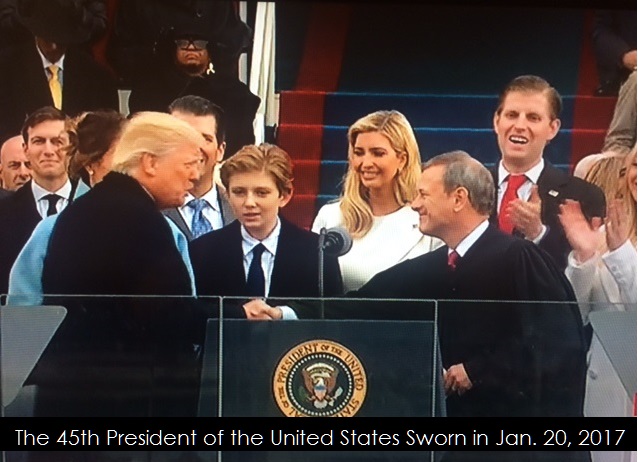 The 45th President of the United States, Donald Trump, was sworn in yesterday as noted in our cover graphic, and we wish him Godspeed.

Before being sworn in we learned of his meeting with Silicon Valley's elite last December to ensure that their concerns were heard before any negotiations begin with new trade deals with China. We also learned that SoftBank Chief Executive Masayoshi Son met with Trump to announce a plan to invest $50 billion in the U.S. along with Foxconn. Alibaba met with Trump about creating one million jobs and LG is preparing a plan to open a plant in the U.S.

Out of Davos this week Cisco's CEO Chuck Robins talked positively about Trump and the meeting held last month other tech executives. "It was an incredibly constructive meeting," Robbins said. "And I think everyone that walked in that room put behind them whatever their political views were during the election."

Yesterday another story broke out of South Korea about the Trump effect on businesses. While the report repeated the news of LG and Samsung working on plans for U.S. plants of one kind or another by closing their plants in Mexico, they also revealed that Hyundai Motor Group, the world's fifth-largest automaker, said earlier this week that it may consider building additional production facilities, while announcing that it will invest a total of 3.6 trillion won ($3.1 billion) in the United States over the next five years.

They also noted that earlier this month, Japan's Toyota also announced its plan to make a $10 billion capital investment in the United States over the next five years and the U.S. automakers General Motors and Ford Motor also followed suit.

President Donald Trump is off to a good start in terms of business and so far responsible CEO's who have actually met with Trump have said that he'll be good for U.S. business. The one-time tax holiday of 10% for bringing profits home to the U.S. alone will benefit all tech companies including Apple with $230 billion and Cisco with $60 billion parked overseas because the taxes are currently too high to bring home. Cook said in 2015 that bringing profits back to the United States would cost him 40%, noting, "I don't think that's a reasonable thing to do."

While President Trump is firing on all cylinders for business with some high profile tech companies lining up to do business right out of the gate, there are some dark clouds ahead that will test the new administration.

A serious report was published earlier this month stemming from the Obama administration that the U.S. semiconductor sector will face risks from China. That's a situation that Trump is inheriting. Obama had already begun to move against China by blocking the sales of Germany's Aixtron to the Chinese.

A government report stated that "We found that Chinese policies are distorting markets in ways that undermine innovation, subtract from U.S. market share, and put U.S. national security at risk."

In another report yesterday we learn that "The new Trump administration has already lined up the first shots in a clash of trade titans. Calling China "the most protectionist country" among major U.S. trading partners, Wilbur Ross, Donald Trump's choice to run the Commerce Department, on Wednesday signaled new tariffs for Chinese steel and aluminum industries dumping their products in the U.S. at artificially low prices.

That gave U.S. steel stocks a one-day boost. But if the protectionist rhetoric and actions continue to ratchet higher, U.S. companies with a big China presence, such as Apple, General Motors and Boeing could get caught in the crossfire."

So interesting times are ahead no doubt for the tech industry and that's what Silicon Valley's meeting with Trump in December was all about. Understand each other and listening to their concerns over work visas, trade problems with China and creating jobs at home.

But for a day, it's just right to stop the political noise and wish the new U.S. President well and wish him Godspeed.