On January 6 Patently Apple posted a report titled "While Samsung's Mobile Division Nosedived this Quarter, other Components gave Samsung a Solid Winning Quarter." We noted in the report that "Samsung's semiconductor division was probably its best performer in the fourth quarter on the back of stronger prices, lifting its shares to new highs in past weeks despite the company's challenges. Operating income from the chip business probably came to 4.5 trillion won in the quarter, according to the average of six analysts surveyed by Bloomberg, which would mark a record high." The official numbers are now out and the forecast played out as we first reported. However, Samsung's mobile statistics were worse than expected.

While we had noted that Samsung's mobile division would nosedive this quarter we didn't have the final stats to quantify that statement. Today we're learning from a Telegraph report that "Samsung's mobile phone sales have fallen to their lowest level in five years amid a slowdown in the global smartphone market, intense Chinese competition and the bungled launch of its Note 7 phone." 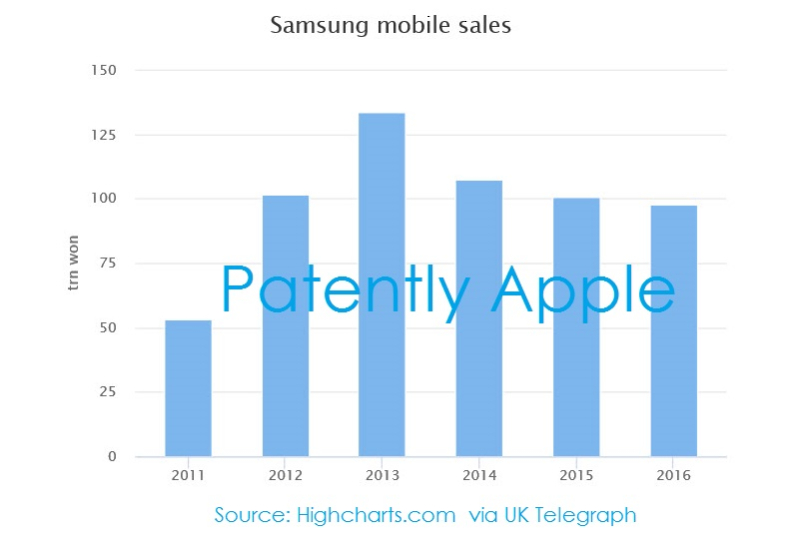 Even though Samsung's Vice Chairman was arrested this week doesn't mean he's out of the woods just yet and Samsung made that clear in their quarterly report by stating that "The uncertain business environment such as the changing political landscape in Korea and overseas poses a challenge to the execution of mid- to long-term business strategies, such as M&A and investment decisions and developing new growth engines," Samsung Electronics said in a statement.

Reuters added in their report that "Analysts said the outlook for 2017 was clouded by uncertainty over the performance of new premium smartphones, succession planning within the controlling Lee family and the fallout from the graft scandal."

Samsung is able to bury bad news about their mobile division being a disaster because they're a conglomerate that makes sure that other divisions make up for the loss so that Wall Street could overlook the bad news in a key sector.

But on its own – Samsung Mobile experienced a devastating quarter. Not that they're alone on this front as many other mobile players had bad quarters like Xiaomi who didn't even release how many smartphones they sold this quarter because it was so bad. So it wasn't just the Note7 disaster that hurt Samsung. The smartphone market in general is experiencing a slowdown while Samsung's fierce Chinese competitors Oppo, Vivo and Huawei are beating them in the mid-market where next-gen models are delivering high specifications at much lower prices than premium models.

In December Patently Apple posted a report titled "Samsung is going to Experience the 'Big Squeeze' in 2017 and their U.S. Market Share is headed for a Crash." So in the bigger picture, Samsung in particular is likely to continue their slide in 2017 if their Chinese competitors Huawei and Oppo entering the U.S. market gain any traction.

For the record, Apple reports their financials at the end of the month, and we'll see at that time if they were able to buck the downward trend in smartphone sales.