Close to a year ago Patently Mobile revealed Microsoft's possible iMac Challenger patent that turned out to be 100% accurate when they launched it last October. On December 16, Patently Apple posted a report titled "Korean Report Wildly Speculates that LG is working with Apple, Google & Microsoft to Deliver Foldable Devices by 2018." On December 18, we posted a second report on this titled "A Leading Supplier of Foldable Display Technology Confirms Five Tech Companies are Testing Foldable Smartphones." Admittedly at the time it seemed a little far-fetched that Microsoft was even in this race for a foldable smartphone being that they could get their act together in the smartphone market with their Nokia line. Yet the rumor now has more credibility considering that Microsoft was recently granted a patent for not only foldable smartphones but also foldable tablets and beyond. While the patent focuses on the hinge system that could make these foldable devices possible, the CAD drawings, like those in our cover graphic, make a convincing case that a Surface smartphone is truly on the drawing board if not already in the making. Another surprising element found in this granted patent was a chart illustrating the sizes of future smartphones, phablets and mini tablets that's a real eye opener.

Mobile computing devices may be found in a variety of form factors, such as a tablet, a mobile communications device (e.g., a phone), and so forth. As these form factors are optimized for mobile use, a size of the device becomes a primary consideration in its design and implementation as well as in a choice made by a consumer as to which device to purchase.

Microsoft's invention is now a granted patent. In one or more implementations, a mobile computing device includes a plurality of housings, e.g., two housings, three housings, and so on. The housings are secured to each other using a flexible hinge structure that is configured to support a continuous surface, across which, a display device may be attached that is flexible. For example, the display device may be configured as an OLED and secured to outer surfaces of the housings as well as the flexible hinge structure, itself.

In this way, the housings of the mobile computing device may support a variety of different usage scenarios through arrangement of the housings in relation to each other, e.g., by folding. For example, a "tablet" configuration may be supported in which each of the housings are "laid flat" such that an entirety of the display device is viewable by a user.

In a "phone" configuration, one of the housings may be stacked behind another one of the housings such that the mobile computing device may be easily grasped using a single hand yet still provide a portion of the display device that is viewable by a user.

A variety of other configurations are also described, such as a "mini-tablet" configuration, as well as biasing mechanisms that may be employed to bias the mobile computing device to remain in a desired configuration. Another is a completely different smartphone design using a slide-to-enlarge feature that allows the user to expand the display for enjoying videos and more. 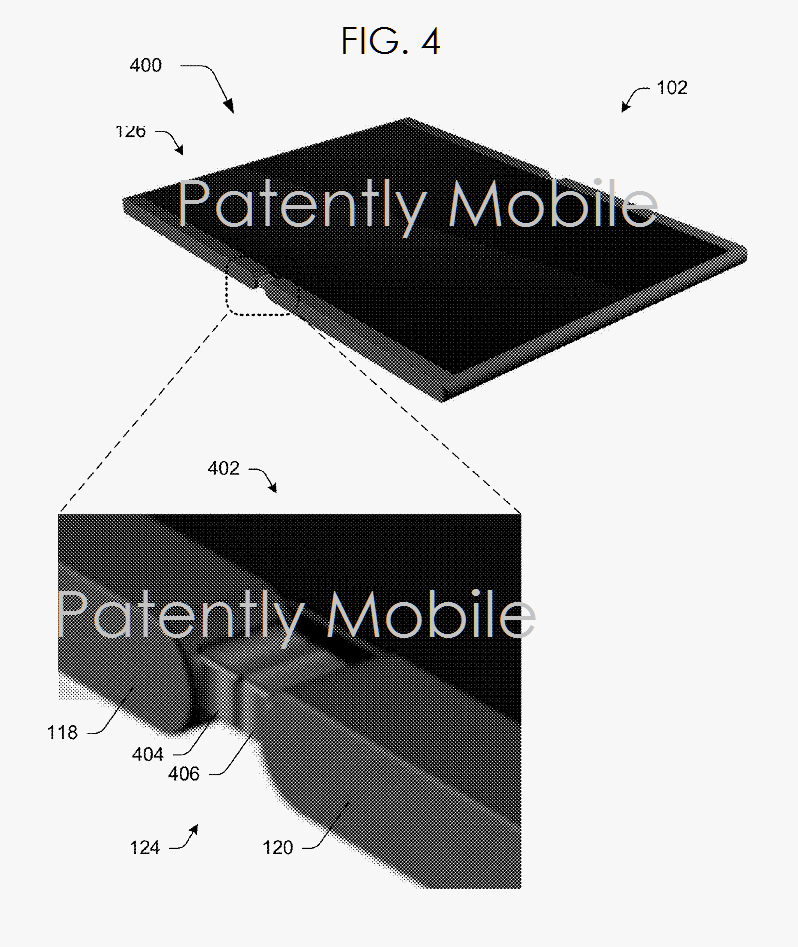 Microsoft's patent FIG. 4 noted above depicts an example implementation in which the mobile computing device assumes a tablet configuration and employs a biasing mechanism to promote stability of the first and second housings in relation to each other to thereby promote stability while in this configuration. Double and Tri-Fold Smartphone and Tablet 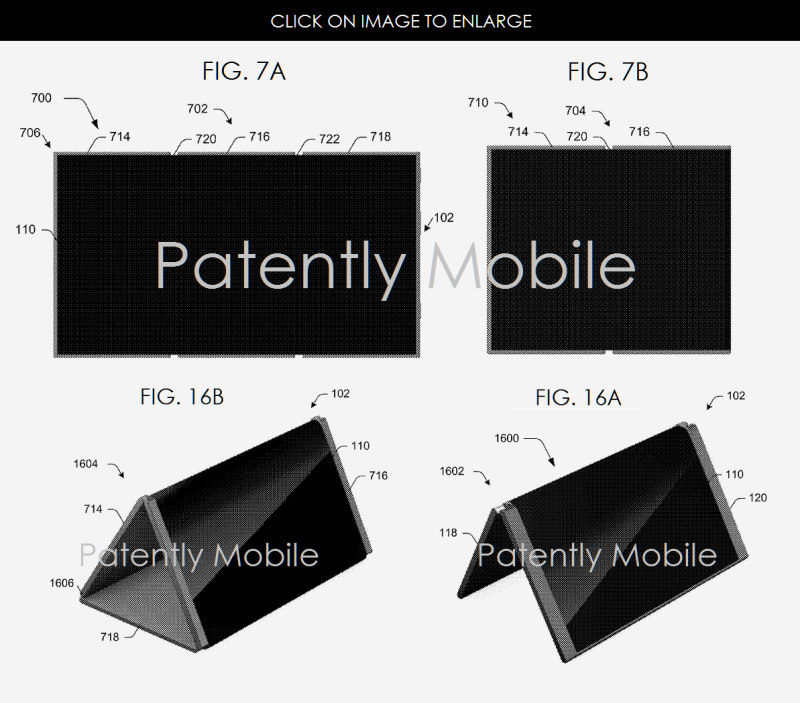 Microsoft's patent FIGS. 7A and 7B noted above depict an example implementation in which additional configurations are shown that are supported through movement of three housings using a plurality of flexible hinge structures; FIGS. 16A and 16B depict an example implementation in which an additional configuration supported by folding of the housing in relation to each other is shown. 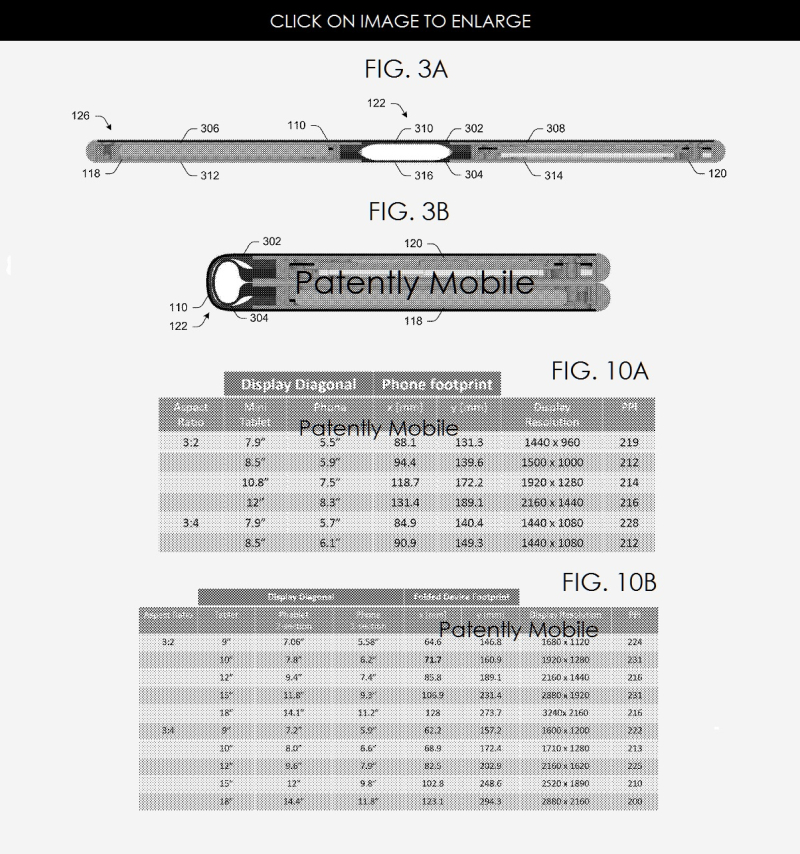 Microsoft's patent FIGS. 3A and 3B depict cross sections of the devices in open and closed configurations; FIGS. 10A and 10B depict an example implementation describing aspect ratios and sizes that may be employed by the mobile computing devices. 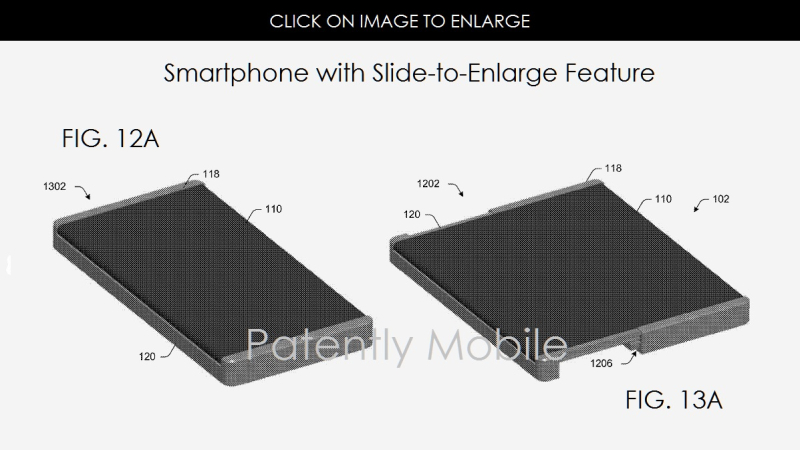 Microsoft's granted patent was originally filed in late 2014 and granted by USPTO earlier this month.

In the big picture it would appear that flexible OLED displays are about to usher in a new class of mobile device over the next two or three years beyond the phablet to allow smartphones to unfold into mini tablets and mini tablets to unfold into full sized pro dimensions up to 14.4" – which is larger than any available tablet today. Microsoft's granted patent on this front is like hearing the starting gun of race that most don't even know has begun. Last month's rumors stated that Apple was also in the race. Let's hope that they are.

If you thought the market got excited over the Surface Studio desktop from Microsoft outshining Apple, then a cool folding smartphone debuting ahead of Apple could really shake up the status quo.

If some are already calling Apple 'Boring' – Microsoft getting the leap over Apple on the smartphone front would rock techland. Not that it would be an instant rise to smartphone industry leadership for Microsoft, but it sure would give them the market boost that they've been looking for since Satya Nadella became CEO.