Home Archives Contact Us Subscribe Twitter MeWe Facebook Patently Mobile
The Danger of Samsung Tanking Korea's Economy if their Chief Goes to Jail Weighs Heavily on Special Prosecution
Pegatron, who first showed no interest in a Plant in the U.S. for Apple Products, is now Reversing Course Yesterday Patently Apple posted a report titled "The Danger of Samsung Tanking Korea's Economy if their Chief Goes to Jail Weighs Heavily on Special Prosecution." Arresting Samsung's Vice Chairman Lee Jae-yong is one thing, but jailing him for any length of time would be another. It was noted yesterday that some on the special counsel demanded they not be harsh on business leaders, pointing out Samsung's influence in South Korean economy. But the public in South Korea who came in numbers exceeding a million want blood. 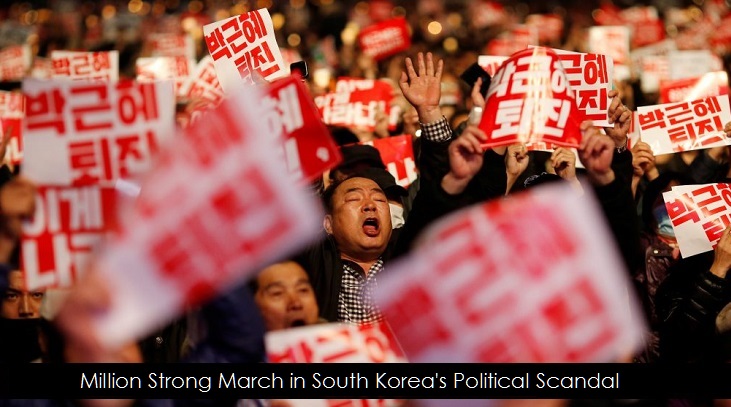 On December 9 the South Korean Parliament overwhelmingly voted to impeach President Park Geun-hye over a corruption scandal. The vote was 234-56, with six abstentions. Now the Constitutional Court's nine members need to return a two-thirds majority to oust Park, which will take up to six months. But now the spotlight is all on Samsung's Vice Chairman.

A new report this morning states that "The special counsel team looking into the widening corruption scandal surrounding President Park Geun-hye and her confidante Choi Soon-sil requested the court to issue an arrest warrant for Samsung Electronics Vice Chairman Lee Jae-yong for bribery charges on Jan. 16.

The Samsung heir has been accused of having ordered the top brass of the conglomerate to fund Choi's businesses and her daughter Chung Yu-ra's equestrian training in return for business and political favors.

But it's not official yet. Lee is due to appear on Wednesday morning at the Seoul central district court, which will decide whether to grant the arrest warrant.

The Heart of the Issue

As part of a consulting contract signed in 2015 with Core Sports, a bogus organization run by Choi, Samsung donated 8 billion won (US$6.80 million). It also contributed 20.4 billion won in total to the Mir and K-Sports foundations, which had been set up by Choi and offered 1.6 billion won to a youth sports club run by her niece Chang Si-ho.

President Park's longtime crony allegedly exerted her influence over government bodies and organizations, including the National Pension Service, one of the largest stakeholders of Samsung affiliates, to vote in favor of a landmark merger between Samsung C&T and Cheil Industries in July 2015.

The merger plan had faced strong opposition from some investors such as Elliott Management due to an "unfair" stock swap ratio which the opponents had said would damage shareholder value of C&T.

The investigation team has already arrested former Health Minister Moon Hyung-pyo over his role in forcing the NPS to vote in favor of the merger.

On the request of the special investigators, a parliamentary committee reported Lee for giving false testimonies during the hearing.

If the Korean court approves the investigators' request to arrest Lee, a leadership vacuum and damage to the firm's image after the Galaxy Note 7 crisis will likely be inevitable, according to market watchers.

"It is difficult to agree with the special prosecutor's decision," Samsung said in a statement, claiming its financial support for Choi Soon-sil, President Park Geun-hey's long-time friend who is at the center of the snowballing influence-peddling scandal, was not intended for any business favors.

"In particular, we find it hard to accept the special prosecutor's argument that Samsung has made improper requests related to the merger of Samsung affiliates or the leadership transition."

Amid the ongoing probe, Samsung has delayed key management decisions, including year-end executive reshuffle, while the heir has been banned from leaving the country. The group is said to have made all-out efforts to avoid the arrest warrant for Lee who has been leading Samsung in place of ailing patriarch Lee Kun-hee.

In Reuters report they added that "The Korea Employers Federation, a business lobby, said arresting Lee would undermine confidence both in Samsung and the country's economy, Asia's fourth-largest, and called the special prosecutor's probe "very regrettable."

South Korea has seen numerous corporate scandals over the years. Jay Y. Lee's father Lee Kun-hee was himself handed a three-year suspended jail sentence in 2009 for tax evasion. He was later pardoned.

Public opinion has in recent years grown less tolerant of leniency extended to the heads of conglomerates, or chaebols, for the sake of the economy.