Apple's Israeli team that in large part includes PrimeSense, the inventor of the technology behind Kinect, is continuing their work on 3D depth mapping that in part is used in the iPhone 7 Plus camera that provides their cool portrait mode that is known in the world of photography as the 'Bokeh' effect. Advanced 3D mapping will spill over to other applications in the future and is likely to play a role in providing realistic AR experiences. The Israeli team has many patents to its credit on this subject including these three relating to Augmented Reality, head and eye tracking that could be used in future headset and controlling devices through in-air pointing gestures as noted in our cover graphic. Today's patent application covers the topic of depth mapping based on pattern matching and stereoscopic information.

Apple's patent FIG. 1 noted below is a schematic, pictorial illustration of a system 20 for 3D mapping and imaging. In this example, an imaging assembly #24 is configured to capture and process 3D maps and images of a user #22 (who is thus the "object" of system #20, as well as its operator). This information may be used by a host computer #26 as part of a 3D user interface, which enables the user to interact with games and other applications running on the computer. 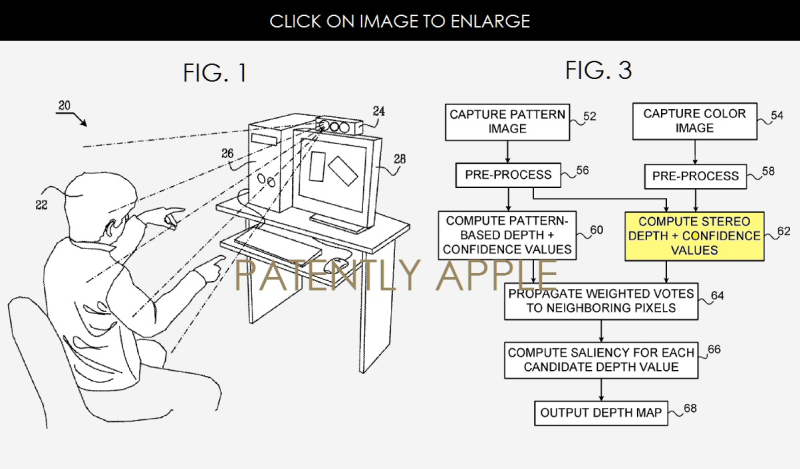 Apple's patent application 20170011524 was only filed back in September 2016. To review the finer details of this invention, click here. Considering that this is a patent application, the timing of such a product to market is unknown at this time.