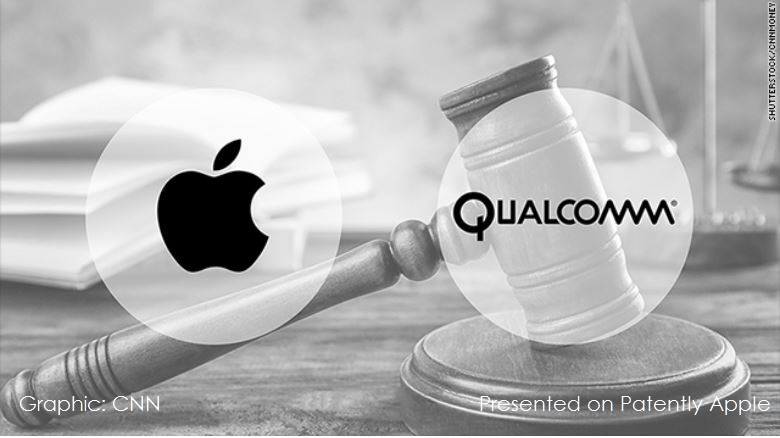 On Friday Patently Apple posted a report titled "Apple Sues Qualcomm for $1 Billion Claiming Unfair Exclusionary Tactics and Charging Excessive Royalties." Today's report covers Apple's full formal complaint against Qualcomm with all its details filed with the Southern U.S. District Court in San Diego with the Presiding Judge being noted as Judge Gonzalo P. Curiel. Under Apple's factual allegations segment they cover such matters as Qualcomm's Secret Manufacturer License Agreements, Qualcomm Preventing Apple from bringing its concerns to law enforcement and Qualcomm Retaliates By Withholding Nearly $1 Billion From Apple. Our report covers the Nature of the Action, The Factual Allegations of the case and a full copy of the format complaint for the curious, legal students and professionals to review.

Apple's formal complaint before the U.S. District Court in San Diego begins with the 'Nature of the Action.' The following is the full section with yellow highlights being added by Patently Apple for emphasis only.

"Law-enforcement agencies around the globe are actively investigating Qualcomm's illegal business practices; in the past two years alone, Qualcomm has been declared a monopolist by three separate governments. Qualcomm pursues its illegal practices through a secret web of agreements designed to obfuscate its conduct. In at least one such agreement, Qualcomm inserted a gag order that prevented an aggrieved party from seeking relief that could curb Qualcomm's illegal conduct, in an effort to keep courts and regulators in the dark and its coerced customers quiet.

Qualcomm was one among many companies that contributed to the development of standards related to how cellular phones connect to voice and data networks. As a contributor, Qualcomm is entitled to a fair royalty based on the value of its particular contribution. Qualcomm is not entitled to collect royalties based on the contribution of others to the standard, or unrelated innovation by companies that utilize the standard—but this is precisely the business model that Qualcomm has established and that it protects through monopoly power and unlawful licenses. In order to purchase Qualcomm chips or obtain access to patents pledged to a cellular standard, Qualcomm demands that third parties pay Qualcomm a royalty much greater than the value of Qualcomm's contribution to the standard—a value based on the entire price of the innovative products that only incidentally incorporate the standard.

What this means in the case of the iPhone® is that when Apple engineers create a revolutionary new security feature such as touch ID, which enables breakthrough technologies like Apple Pay, Qualcomm insists on royalties for these and other innovations it had nothing to do with and royalty payments go up.

When Apple spends billions redefining the concept of a smartphone camera, Qualcomm's royalty payments go up.

Even when Apple sells an iPhone with added memory—256GB instead of 128GB—Qualcomm collects a larger royalty just because of that added memory.

Apple products are among the most innovative in the world, yet because of its monopoly power, its suppression of the disclosure of information to government agencies investigating Qualcomm, and an abusive licensing model, Qualcomm believes it is entitled to collect its "tribute" on every such improvement.

Apple, which has been overcharged billions of dollars on Qualcomm's illegal scheme, brings this action to recover its damages, enjoin Qualcomm from further violations of the law, and request declaratory relief. Among Apple's damages are nearly $1 billion that Qualcomm owes to Apple under an agreement between the two companies. Qualcomm claims that Apple has forfeited those amounts by responding to requests in the course of an investigation by the Korea Fair Trade Commission ("KFTC"), which recently levied the largest fine in its history against Qualcomm. Qualcomm has withheld the required contractual payments from Apple even though the agreement clearly permits Apple to respond to the KFTC's lawful investigation and requests for information. If that were not enough, Qualcomm then attempted to extort Apple into changing its responses and providing false information to the KFTC in exchange for Qualcomm's release of those payments to Apple. Apple refused.

Having a common set of standards for these cellular networks is beneficial to consumers because it encourages investment in infrastructure and technology. Common standards allow cellular phones to work together and then permit companies like Apple the opportunity to innovate in building great products.

Qualcomm broke its promise and has breached its FRAND commitments. Qualcomm illegally double-dips by selling chipsets that allow mobile telephones to connect to cellular networks and then separately licensing (but never to competitors) the purportedly necessary intellectual property. By tying together the markets for chipsets and licenses to technology in cellular standards, Qualcomm illegally enhances and strengthens its monopoly in each market and eliminates competition. Then, Qualcomm leverages its market power to extract exorbitant royalties, later agreeing to reduce those somewhat only in exchange for additional anticompetitive advantages and restrictions on challenging Qualcomm's power, further solidifying its stranglehold on the industry. All of this has been forced on Apple because the iPhone and the iPad® have required Qualcomm chips.

Qualcomm's abusive practices have particularly harmed Apple, the prime innovator in the mobile device industry. In recent licensing discussions with Apple, Qualcomm has asserted that it has a 'good faith belief' that Apple's products—which now use both Qualcomm and Intel chipsets to connect to cellular networks—infringe many Qualcomm patents simply because Qualcomm "holds a great many patents that are essential to cellular standards implemented by Apple products," including the 3G/UMTS and/or 4G/LTE standards.

Qualcomm has recently demonstrated that it will file lawsuits following threats to assert its patents. The asserted patents in this case include patents that are U.S. counterparts of Chinese patents that Qualcomm has asserted in litigation against Meizu Technology Co., Ltd. ("Meizu") and that Qualcomm has declared as essential to the 3G/UMTS and/or 4G/LTE standard. These patents are not, in fact, essential to 3G/UMTS or 4G/LTE and are not infringed by Apple. Moreover, if any of these patents were essential, Qualcomm's licensing demands violate patent law and its FRAND obligations.

For years, Qualcomm has abused its business relationships with Apple and blocked competitors from selling chipsets. Qualcomm's recent effort to cover its tracks—by punishing Apple for providing truthful testimony at the request of government regulators—underscores the lengths to which Qualcomm will go to protect its extortion scheme. Accordingly, Apple seeks this Court's intervention, bringing breach of contract claims, patent claims, and antitrust claims, as the basis for declaratory relief, injunctive relief, and damages.

"When Apple unveiled the iPhone in 2007, it revolutionized the telecommunications industry and completely redefined what users can do on their mobile phones. The iPhone combined three products—a revolutionary mobile phone, a widescreen iPod® music player, and a breakthrough computer/Internet communications device—into one small and lightweight handheld device with a large, color multi-touch display; a distinctive user interface; and a sophisticated computing platform for mobile apps. Apple patented many of these innovations.

In 2010, Apple created and defined an entirely new category of devices with the revolutionary iPad. The iPad connects users with their apps and content in a much more intimate, intuitive, and fun way. The iPad is an elegantly designed computer tablet with a color multi-touch screen, a user interface akin to the iPhone, and robust functionality that spans both mobile computing and media storage and playback. As a result of its innovative technology and distinctive design, the iPad achieved instant success and continues to hold a considerable share of the U.S. tablet market.

Among many other functions, both the iPhone and certain models of the iPad can send and receive, over cellular networks, telephone calls and/or other voice and video communications, text messages, and Internet data. Except when connected to a Wi-Fi network, a mobile wireless device like an iPhone or iPad cannot be used for communication without a baseband processor chipset, a component that, among other functions, acts as a small wireless radio and "plugs in" to a standardized telecommunications network. Such networks are created and maintained by carrier companies, including, for example, AT&T, Verizon, Sprint, and T-Mobile.

This segment continues in Apple's full complaint that is provided for our readers further below. The complaint continues to cover subject matters as follows:

On page 19 of the complaint under the segment titled "Qualcomm's Secret Manufacturer License Agreements," Apple provides the graphic as shown below which according to Apple, illustrates the "complex web of contracts, some of them secret contracts that underlie Qualcomm's scheme of relentless extortion and govern the two companies' business relationship." 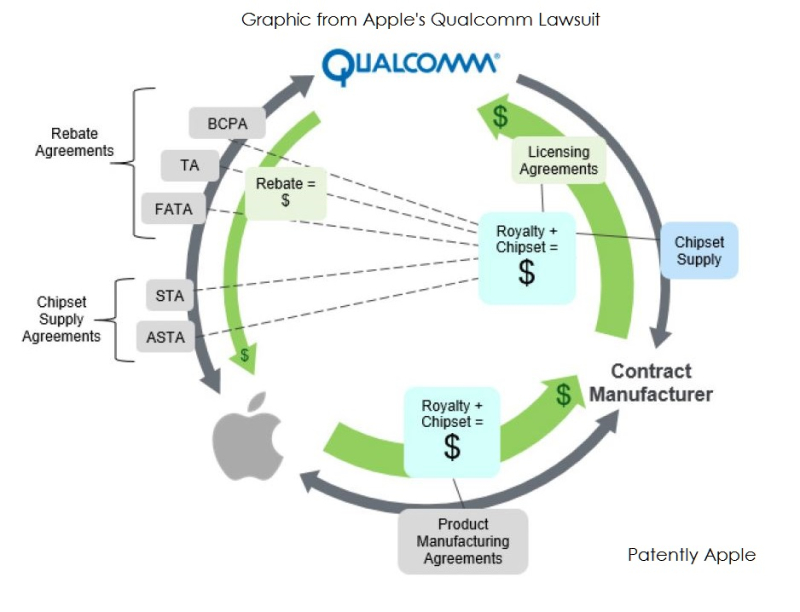 Qualcomm's initial response was issued in a press release on Friday as follows:

"While we are still in the process of reviewing the complaint in detail, it is quite clear that Apple's claims are baseless. Apple has intentionally mischaracterized our agreements and negotiations, as well as the enormity and value of the technology we have invented, contributed and shared with all mobile device makers through our licensing program. Apple has been actively encouraging regulatory attacks on Qualcomm's business in various jurisdictions around the world, as reflected in the recent KFTC decision and FTC complaint, by misrepresenting facts and withholding information. We welcome the opportunity to have these meritless claims heard in court where we will be entitled to full discovery of Apple's practices and a robust examination of the merits," said Don Rosenberg, executive vice president and general counsel, Qualcomm Incorporated.