Apple reinvented the wireless headphone with AirPods on September 7, 2017. While they only began to trickle out to certain markets before Christmas, they have become one of the hottest selling accessories from Apple.

Apple said that the new wireless headphones use advanced technology to reinvent how we listen to music, make phone calls, enjoy TV shows and movies, play games and interact with Siri, providing a wireless audio experience not possible before.

AirPods eliminate the hassles of wireless headphones, by just flipping open the lid of its innovative charging case and with one tap, they are instantly set up and ready to work with your iPhone and Apple Watch.

Advanced sensors know when you are listening and automatically play and pause your music. Using Siri, AirPods allow you to access your favorite personal assistant with just a double tap. This revolutionary experience is enabled by the new ultra-low power Apple W1 chip, which enables AirPods to deliver high-quality audio and industry-leading battery life in a completely wireless design.

Today Patently Apple discovered Apple's patent filing made in Australia relating to AirPods under the title "Antennas for Wireless Earbuds."

Apple's patent FIG. 4 noted below is a rear perspective view of the illustrative AirPods of FIG. 3 showing where an antenna may be located. 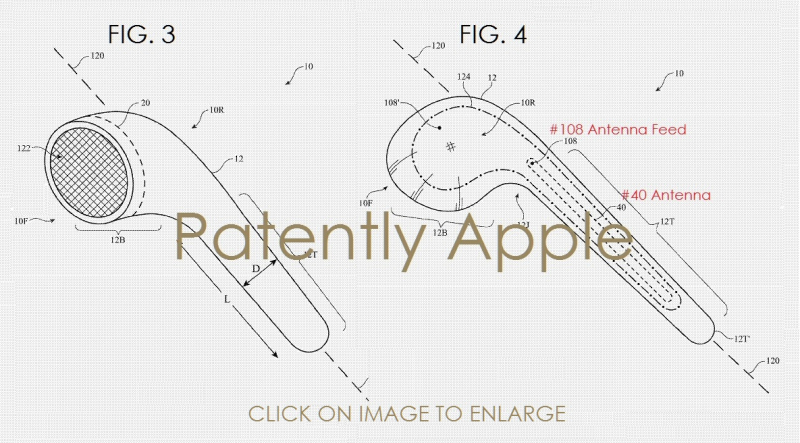 According to Apple's patent filing, "Antenna adjustments may be made to tune antenna #40 to perform in a desired frequency range or to otherwise optimize antenna performance. Sensors may be incorporated into the antenna or elsewhere in the AirPods (device #10) to gather sensor data in real time that is used in adjusting the antenna."

To review all of the finer details of this invention, click here. In December Patently Apple posted a major AirPods related report titled "Two of Apple's AirPod Patent Filings Surfaced this Week at the U.S. Patent Office." On January 14 Apple launched four TV ads for AirPods.