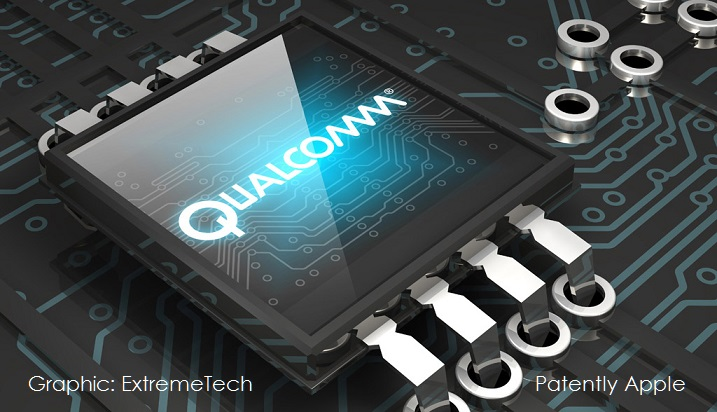 On Tuesday Patently Apple posted a report titled "The U.S. Fair Trade Commission Sues Qualcomm for Forcing Apple to use its Chips in iDevices." Now that the FTC has filed their case against Qualcomm, Apple has moved forward with a lawsuit of their own againt the chip maker for roughly $1 billion. Apple apparently stated in the lawsuit that Qualcomm was charging royalties for technologies they have nothing to do with."

Apple says that Qualcomm has taken "radical steps," including "withholding nearly $1 billion in payments from Apple as retaliation for responding truthfully to law enforcement agencies investigating them."

Apple added, "Despite being just one of over a dozen companies who contributed to basic cellular standards, Qualcomm insists on charging Apple at least five times more in payments than all the other cellular patent licensors we have agreements with combined."

Apple further noted that "For many years Qualcomm has unfairly insisted on charging royalties for technologies they have nothing to do with. The more Apple innovates with unique features such as TouchID, advanced displays, and cameras, to name just a few, the more money Qualcomm collects for no reason and the more expensive it becomes for Apple to fund these innovations.

Qualcomm built its business on older, legacy, standards but reinforces its dominance through exclusionary tactics and excessive royalties. Despite being just one of over a dozen companies who contributed to basic cellular standards, Qualcomm insists on charging Apple at least five times more in payments than all the other cellular patent licensors we have agreements with combined." For more of Apple's statement read the full CNBC report here.

Reuters adds to this story that Apple "also accused Qualcomm of selling chips while requiring Apple to pay a separate licensing fee for the same chips, in a 'no license, no chip' policy. Additionally, and surprisingly, Apple stated that Qualcomm pressured network carriers to not sell or support Apple devices made with Intel chipsets."

Unfortunately in Bloomberg's report they decided to twist reality to suit their own narrative like most of the media twisted Donald Trump's words to fit a negative narrative they invented. Even though the Chinese government stepped in to fight Qualcomm back in 2014 on behalf of Chinese smartphone OEMs for charging excessive royalties and now South Korea's FTC fining Qualcomm for the very same thing, somehow it's viewed by Bloomberg that Apple suing Qualcomm isn't about excessive royalties, but rather "Apple facing pressure to squeeze more profit out of every iPhone after revenue declined last year for the first time since 2001, dragged down by lower handset sales."

Back on earth, it should be noted that in December Apple sued Acacia Research who they believe is working in concert with Nokia. Apple noted in their complaint before the court that part of Nokia's plan is "to extract and extort exorbitant revenues unfairly and anticompetitively from Apple and other innovative suppliers of cell phones."

In this light, it's clear that Apple has declared war on those trying to extort excessive royalties on iPhone sales. A victory for Apple in either or both cases would be a win for all smartphone makers in the future.