According to new IDC stats, Worldwide shipments of traditional PCs (Desktop, Notebook, and Workstation) totaled 70.2 million units in the fourth quarter of 2016 (4Q16), posting a year-on-year decline of 1.5%. The results continued the recent trend of stabilizing growth. Apple was boosted by the launch of their new MacBook Pro models during the fourth quarter which moved them back into fourth place, ever so slightly ahead of Asus who suffered an 11.3% decline during the holiday quarter. Yet even with the boost of the MacBook Pro, Mac sales were down by 0.9% because their desktop line of computers (iMac/Mac mini, Mac Pro) didn't get updated in Q4. 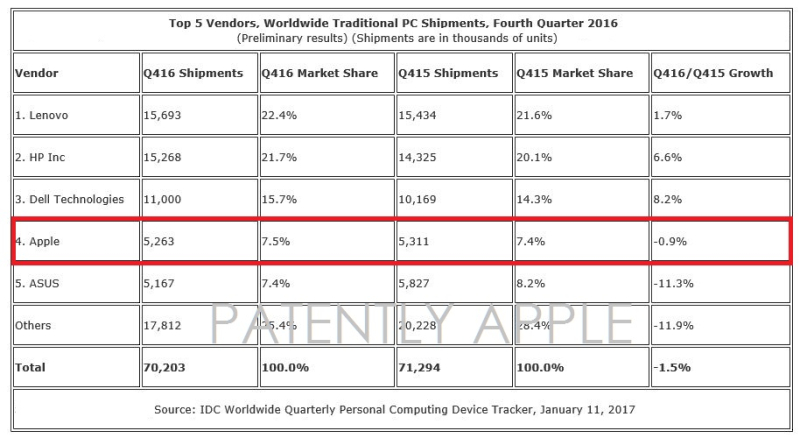 Lenovo continued to hold the top spot, though the competition with HP remains fierce. The top vendor still faced a tough climate in APeJ but made significant strides in the holiday quarter in Europe and the Americas with a stronger performance in notebooks and capped the quarter growing globally at 1.7%, ending six consecutive quarters of year-on-year declines.

HP Inc. held the second position, growing 6.6% compared to 4Q15 for its third consecutive quarter of positive growth and shipping more than 15 million units for the first time since 4Q14. HP Inc. further consolidated its share in the United States market, growing its market share to 31%. The company also saw sizable gains in EMEA and APeJ.

Dell Technologies also had a productive quarter with shipments of just over 11 million (the first time it has done so since 4Q11) and growth of 8.2%. The number 3 vendor managed positive year-on-year growth in every region with strong notebook volume as well as a positive desktop quarter.

For the record, Gartner published their stats for PC's for the quarter with different results but their data is tainted in my view. Microsoft's Surface and similar PC OEM tablets with keyboards are considered PC's and not tablets whereas they don't include Apple's iPad or iPad Pro to balance their report. This skews the data and sullies the results to favor traditional PC OEMs. For that reason we don't present their findings in this report.