The U.S. Patent and Trademark Office officially published a series of 55 newly granted patents for Apple Inc. today. In this particular report we cover Apple's granted patent relating to bulk-solidifying amorphous alloys which is also known for marketing purposes, liquid metal. One tiny aspect of this patent covers how liquid metal can be applied to Apple Products to set their embossed logo as noted in our cover graphic.

Apple's newly granted patent covers their invention relating to rapid discharge processes for amorphous metal forming, and products made by these processes.

Bulk-solidifying amorphous alloys are also referred to as liquid metal. In the figure below we're shown how the embossed Apple logo is created with a liquid metal process. 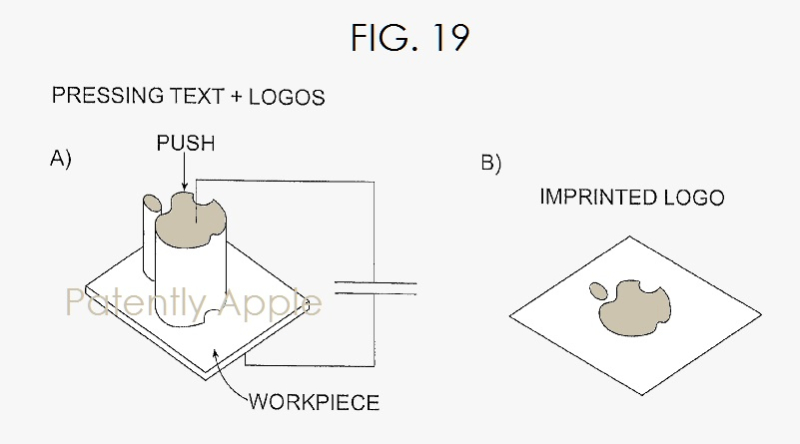 Apple's patent FIG. 19(a) noted above (labeled as "Pressing text+logos") shows the process of forming a logo or text on a metallic glass workpiece using a positive mold of a tool or punch and performing a rapid discharge forming on the workpiece by locally heating up the surface in the vicinity of the electrode or heating the whole part and then pressing the shaped electrodes on the heated surface so as to leave an imprint on the surface of the metallic glass workpiece as shown in FIG. 19(b) having a label stating "Imprinted logo."

Apple's granted patent was originally filed in Q4 2012 and published today by the US Patent and Trademark Office. To review the details of this invention click here.