When Apple launched their iPad Pro in the fall of 2015 with its softcover Smart Keyboard and Pencil, they blatantly forgot to provide a mechanism that would allow users to attach their Pencil to the iPad in any way. Apple was granted a patent for "Smart Covers with Magnetic Attachment Unit" back in November 2016 that was originally filed back in 2014 – well ahead of the iPad Pro's debut. Last September Apple filed for a patent relating to a magnetic array system that would allow the Apple Pencil to attach to an iPad's metal body. It's tricky because magnets don't naturally connect to aluminum.

On Thursday one of Apple's Pencil patents surfaced that generally relates to wireless communications circuitry and, more particularly, to wireless communications circuitry for elongated wireless devices such as computer styluses. Yet buried in Apple's patent filing is the reference to a portion of a future Apple Pencil being magnetized so as to allow it to be attached to the exterior of an object or a magnetic attachment structure.

Additionally, a future Apple Pencil could come with a non-techie solution as simple as a cheap "clip" so that users could clip it to a shirt or jacket pocket like a standard pen.

Hopefully Apple will finally introduce a solution for attaching the Apple Pencil to the iPad Pro or other accessory device later this spring when their updates launch.

Apple's patent FIG. 19 noted below is a perspective view of an illustrative three-dimensional antenna of the type that may be mounted at the end of the stylus; FIG. 24 is an exploded perspective view of an illustrative stylus with a removable cap and an antenna that is formed at a location that is offset from the end of the stylus. 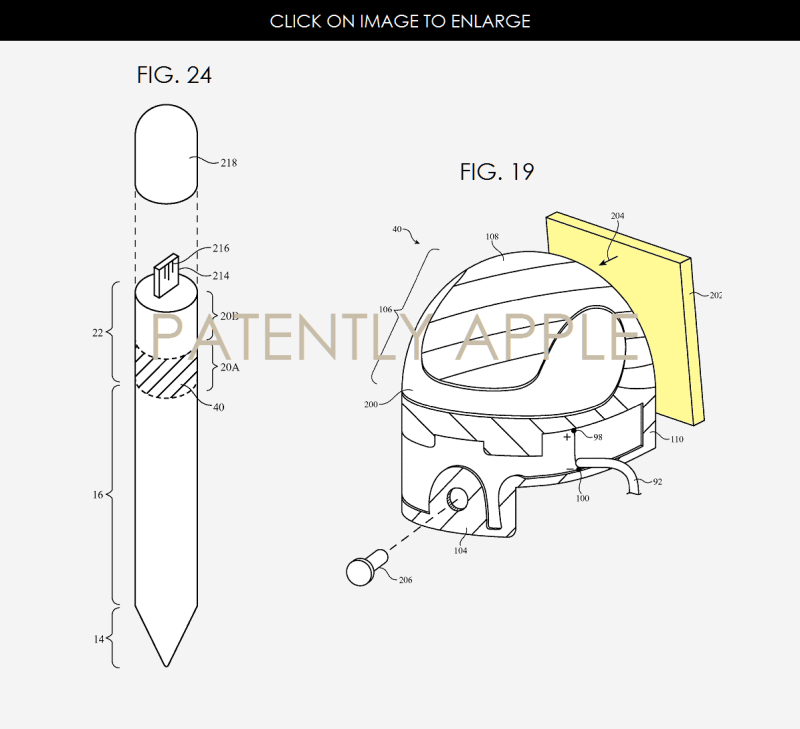