A report this week out of Europe noted that French investigators theorize that the batteries in a co-pilot’s iPad mini 4 or iPhone 6s may have caused the mysterious crash of EgyptAir flight MS804, which went down on May 19th of last year. All 66 people onboard were killed.

The theory—and so far, it is only a theory—was disclosed to French newspaper Le Parisien by sources within the investigation. It contradicts claims by Egyptian investigators, who had previously speculated that the plane was targeted by terrorists, based on traces of explosives found in victim's bodies.

But French investigators have said data show a fire, not an explosion, was to blame. Black box data from the plane showed that a fire broke out somewhere in or near the plane's cockpit before the plane crashed. Onboard voice recordings also indicate a fire.

Video from Charles de Gaulle airport showed the plane's co-pilot placing his iPhone 6S and iPad Mini on top of the plane's instrument panel before the plane's departure, along with several bottles of perfume. That's the precise location where the first automatic warning messages identified problems, moments before the plane went down. 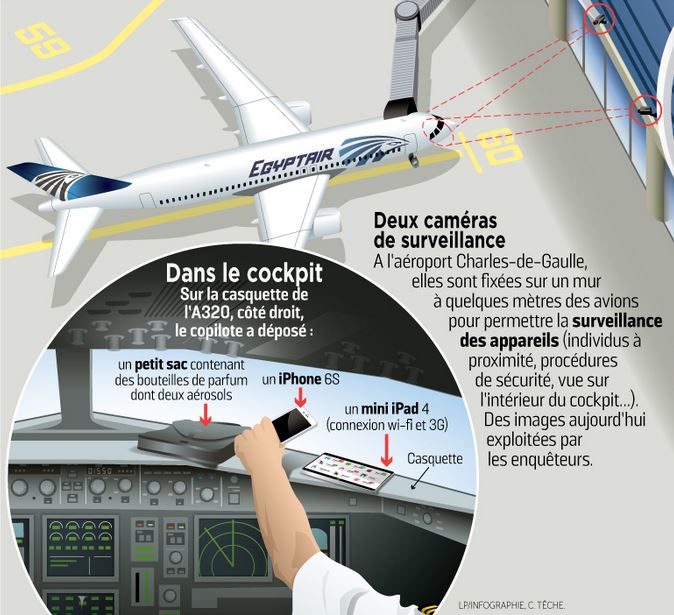 Though the evidence in the EgyptAir incident so far seems circumstantial, the exploding-iPhone theory is now "at the heart of the investigation," according to Le Parisien. The basics of the story was covered by Fortune.

The Telegraph's report on this noted that "Officially the French air accident agency, the BEA, said it considers it "not possible at this stage to draw any conclusions on the origin of the accident". Egyptian authorities, it said, had failed to provide sufficiently "detailed information on the conditions in which the samples and measures were taken that led to the detection of explosive traces".

The Telegraph's report also reported that David Learmount, operations and safety editor at Flight International magazine and a former pilot, said he thought the idea that mobile devices were the cause was a "red herring".

"Firstly, pilots don't leave objects on the dashboard because they know the they will end up in their lap when they take off or on the floor and they'll get airborne in turbulence and could jam the controls."

"Also, a phone bursting into flames just below the windscreen is a fairly spectacular thing to take place on a flight, and they would have told somebody on the ground. Nobody has mentioned this."

The article by France's Le Parisien quotes Apple's reaction: "We were not contacted by the GTA or any other authority investigating this tragic event. We have not had access to the report, but our understanding is that there is no evidence linking this event to Apple products. We are entirely at the disposal of the investigators to answer any question. We rigorously test our products to ensure that they comply or exceed international safety standards."

Unless the French investigative team can produce the very Apple product and confirm a direct connection to the crash, putting out a theory such as this to the public is incomprehensibly irresponsible. You have to wonder what political motivation there could possibly be for such reckless behavior.