Apple supplier Foxconn was in the news on Friday in three unique instances. Our first report covered the rumor of a possible LCD Plant in the U.S. and our second report covered an investment in the Israeli company called Core Photonics that makes dual lens cameras for mobile devices that competes with the iPhone Plus camera. Foxconn and Samsung are noted as investors in the Israeli company. The third unique Foxconn investment that we learned of this week is one that they're making along with HP and Google. The latter investment is the most interesting of all because the investment is in a new company called 'Essential Products, Inc., who is owned by Android inventor Andy Rubin. Beyond an investment, Foxconn is in negotiations with Rubin to manufacture this next generation smartphone that Rubin has been working on with a team of engineers from both Apple and Google.

In December Rubin filed for the trademark 'Essential' with the U.S. Patent and trademark Office. Under application 87278834 as noted below we're able to see that the trademark was filed under International Class 009 covering mobile phones, smartphones, computers, tablet computers, replacement parts and accessories. 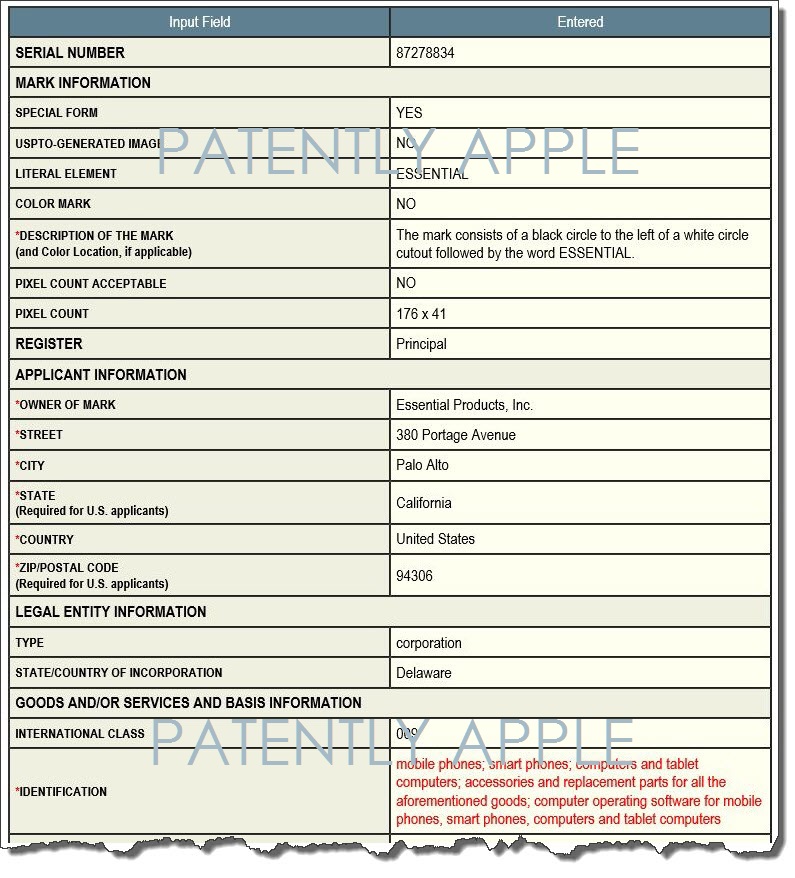 A second trademark filing that was made back in December 2016 under application 87275302 covered their corporate logo as noted in our cover graphic above (in two forms, with and without the word Essential).

The center piece of the Essential hardware line-up, according to a new Bloomberg report, is a smartphone with a large edge-to-edge screen that lacks a surrounding bezel. At the Consumer Electronics Show in Las Vegas in early January, Rubin discussed the smartphone with mobile carrier executives, including some from Sprint Corp., people familiar with the talks said. The smartphone is characterized by Bloomberg as a high-end smartphone that is likely to be aimed at Apple's iPhone.

At least one prototype of Rubin's phone boasts a screen larger than the iPhone 7 Plus's (5.5-inches) but has a smaller overall footprint because of the lack of bezels, one of the people said. The startup is experimenting with enabling the phone's screen to sense different levels of pressure, similar to an iPhone, the person said. Rubin's team is testing an industrial design with metal edges and a back made of ceramic, which is more difficult to manufacture than typical smartphone materials, two of the people said. There are two granted patents on record covering this new smartphone. One of the patents is somehow blocked from viewing by U.S. Patent Office (USPTO) for whatever reason. When you feed in the granted patent number in the database, USPTO's page returns a statement that the "Full text is not available for this patent." The USPTO page informs readers to click on 'Images' to see the patent figures, but when you do that you end up with "Patent Not Found."

In the one patent that I could access I was able to see a number of aspects about the new smartphone. Bloomberg's report noted specifically that Essential's team was "experimenting with enabling the phone's screen to sense different levels of pressure." This is supported in the patent which goes into great depths on different levels of force touch.

The patent's FIG. 1 is noted above which describes a unique "unibody" design. The following covers an introduction to the new smartphone.

The chassis/unibody could be made of many materials including ceramic metal, glass, carbon fiber, silicone or any combination thereof. 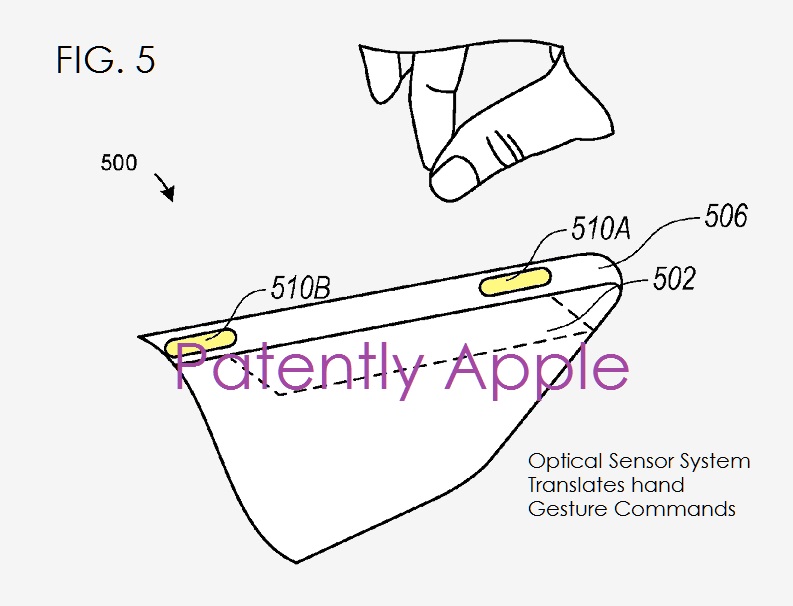 In Essential's patent FIG. 5 noted above , we're able to see a perspective view of a smartphone having an optical sensor system #502 (shown in dashed lines) capable of visually detecting user interactions proximate to the smartphone.

In some embodiments, the optical sensor system determines a user interaction event based on image analysis of one or more captured images.

For example, the user interaction event can be a touch event or a user gesture event.

The Smartphone will use a Proprietary Connector

The Bloomberg report also pointed to a new connector: "Essential's engineers are developing a proprietary connector that serves double duty for charging the battery and expanding the phone's functionality over time, one person familiar with the planning said. The magnetic connector would allow Essential or even third parties to create hardware accessories that add features to the smartphone."

One of the inventors listed on the Essential Products patent also invented a proprietary connector while he was working for Lytro, Inc. Interestingly "Lytro is building the world's most powerful Light Field imaging platform enabling artists, scientists and innovators to pursue their goals with an unprecedented level of freedom and control. This revolutionary technology will unlock new opportunities for photography, cinematography, mixed reality, scientific and industrial applications." You could learn more about lytro light field technology here and here.

If the 'Essential' smartphone's camera has any connection with Lytro, and that's a big if, then it could be a game changer for photographers. It's Apple's depth-imaging 'Portrait' feature for the Bokeh effect on steroids.

The connector noted below was granted a patent in February 2016. It's a design patent which means we have absolutely no details about the connector other than visuals. 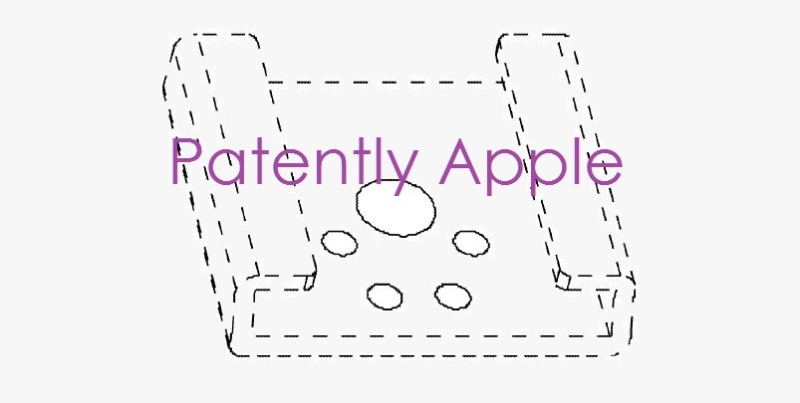 According to the Bloomberg report, Andy "Rubin is aiming to put the phone on sale around the middle of this year for a price close to that of an iPhone 7 ($649)." With Ruben having worked with AI systems, it's yet another angle that may emerge with Essentials new smartphone and other mobile products.

For Foxconn, it's an opportunity to get in on the ground floor of a potentially successful new smartphone and gain a contract to manufacture it. For HP, it could be a breakthrough smartphone for them to get behind. It could be a smartphone that could put them on the map in this crowed field if it introduces breakthrough features that could challenge the status quo.

The most intriguing connection of all is Google. Will this next-gen smartphone be powered by Android or a whole new OS written from scratch offering advanced graphics, photography and mixed reality features that could end up being Google's high-end OS.

Looking at the partners gathering behind this venture tells us that it's not a mickey mouse adventure. So 2017 is going to be one hell of an exciting year with Apple's anniversary iPhone, the comeback of Samsung's Note smartphone and now the mystery "Essential" smartphone to mix things up. Just when things were starting to get a little boring on the smartphone front, it seems that 2017 could be the beginning of a new wave of innovation that might even tap into foldables later this year. Enjoy the ride.