With Wintel Partner Xiaomi Introducing a Cellular Notebook Today, will this be the Year of the Cellular MacBook?

Earlier this month Microsoft announced Qualcomm Snapdragon based tablets and PCs with built-in cellular capabilities. This is big news because Windows support for Qualcomm chips has secured OEMs Huawei and Lenovo who are moving away from Android, especially for the enterprise. The new systems will also provide customers with much better battery life than today's notebooks, according Microsoft.

Microsoft's Terry Myerson, Executive Vice President noted during his keynote that "For the first time ever, our customers will be able to experience the Windows they know with all the apps, peripherals, and enterprise capabilities they require, on a truly mobile, power efficient, always-connected cellular PC."

I had noted in a report on Tuesday that users will be able to join a wireless network automatically from their new 2017 Surface tablets and notebooks by simply filling out a short form built-into the system and sign up for wireless data service for a specific term such as a week, a month, a quarter or a year without having to worry about a SIM Card.

I also noted that Apple had been working on the cellular MacBook for more than six years with enough patents to have warranted a special archive. So is it a little aggravating to see Microsoft get the leap on an idea that Apple has been sitting on for years? In a word, yes.

More aggravating is the fact that Xiaomi is now getting the jump on this idea in China ahead of Apple. They introduced the Mi Air 4G Notebook earlier today in Beijing with built-in cellular feature. 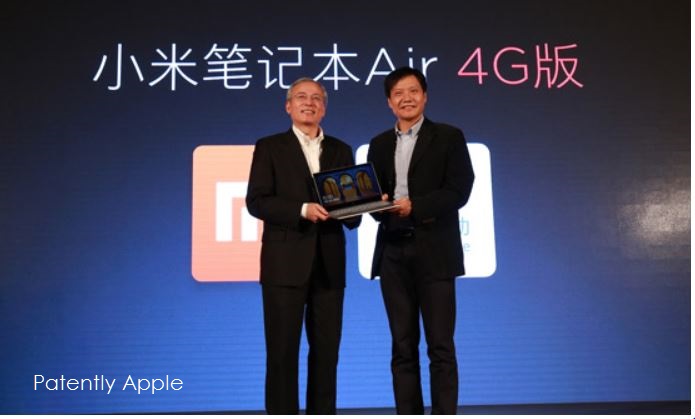 Liu De, co-founder and vice president of Xiaomi, said their "computer could be connected to the internet anytime, anywhere as there is a module enabling network service via an independent internet of things (IoT) 4G channel provided by China's largest telecom operator, China Mobile."

With most big cities in China offering wide-spread Wi-Fi it's unknown how this new notebook will be received. However, keep in mind that Xiaomi is coming to the US in 2017 and a cellular notebook could be one of the products that they'll begin with. Patently Apple reported on this possibility back in 2015.

Knowing that Microsoft and partners will be invading the market this year with cellular notebooks, will this finally be the year that Apple brings their Cellular MacBooks to market? There won't be a SIM Card slot to irritate Jony Ive's design sensibilities and so it should get the green light – on at least one of Apple's MacBook models to start with.

And god knows we don't need to hear Microsoft boasting over this new feature not being on MacBooks over and over again in 2017, do we? Let's hope that Apple saves us the headache.

Would you be interested in a Cellular MacBook in 2017? Send in your comments below.