Home Archives Contact Us Subscribe Twitter MeWe Facebook Patently Mobile
Apple Granted 51 Patents Today Covering an iPhone with a Glass Housing, a Borderless OLED Display, a Lighting System & More
The Supreme Court Narrows the Cost of Copying Apple's iPhone, but it's the Lower Court that will determine by how much 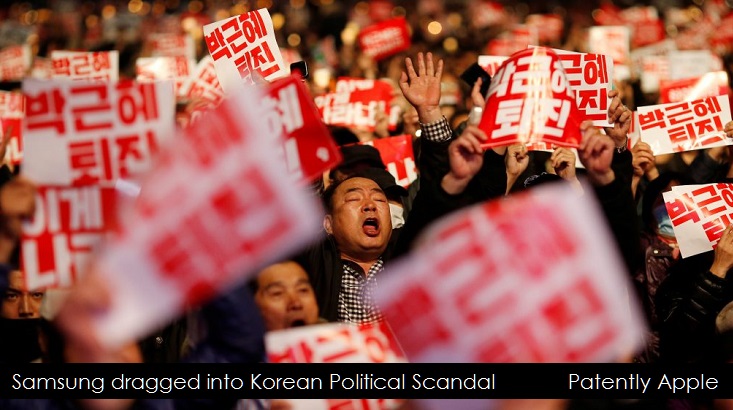 Samsung Electronics Vice Chairman Lee Jae-yong and heir-apparent to South Korea's largest conglomerate is undergoing a baptism of fire. After dealing with their flagship Note7 causing fires and their top loading washing machines exploding, Lee is now dealing Samsung being under investigation for officially bribing government officials. Patently Apple first covered this development in a report in November titled "Samsung's Troubles Continue as they Get Dragged into a Political Scandal Accusing them of Influence-Peddling." Our report noted that South Korean prosecutors had entered the offices of Samsung as they searched for evidence the smartphone maker illegally provided gifts for a confidante of President Park Geun-hye that is at the center of an influence-peddling investigation. The company confirmed the raid and declined to comment further.

Obviously the prosecutors found what they were looking for because earlier today Samsung's Lee said that he would close the group's private office which was allegedly the source of a corruption scandal worth tens of billions of won (millions of US dollars). There was no denying the office existed, it was just a matter of fact.

The heir-apparent to South Korea's largest conglomerate said that he would accept lawmakers' demands to close the group's Future Strategy Bureau, which was said to be involved in the company's 20.4 billion won (US$17.4 million) donation to two foundations controlled by Choi Soon-sil, a longtime friend of President Park Geun-hye.

At a hearing at the National Assembly, the country's legislature, Lee stated that "I've learned that there is negative sentiment against the Future Strategy Bureau. I will get rid of the organization if people and lawmakers are negative about it. It is time for Samsung to change. We will cope with the changing circumstances and people's standards." 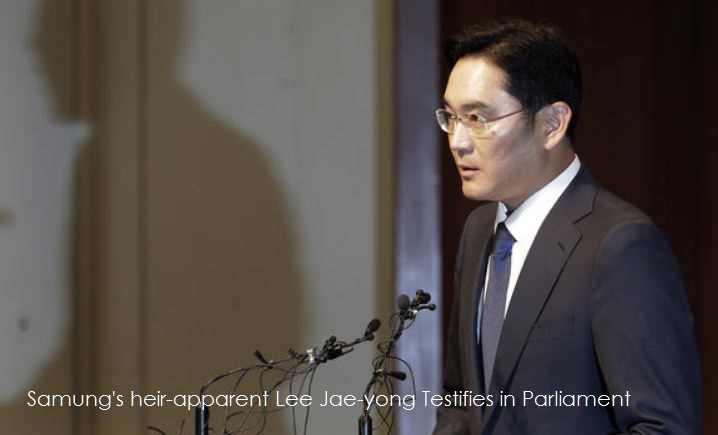 The bureau is also suspected of transferring 2.8 million euros ($3.02 million) to a company in Germany owned by Choi, who used the funds for her daughter's equestrian training. The opaque organization (the Future Strategy Bureau) oversees not only Samsung's flagship electronics unit but also other affiliates.

The Samsung Group is under investigation for being the biggest donor to Choi's foundations, which allegedly managed to collect 77.3 billion won from a total of 18 conglomerates. Under intense scrutiny, Samsung Electronics said on Nov. 29 that it would consider changing to a holding company structure and increase dividend payments by 30%, yielding to demands by U.S. activist fund Elliott Management.

One Samsung critic who is the head of a private research center was skeptical that Samsung would really change. He stated that "the bureau's former name was the secretariat bureau and they changed it to the Future Strategy Bureau. Who knows if Samsung would just change the name again and keep the organization running as always?"

Lawmakers also raised questions about whether Samsung's donations were in fact bribes to Choi in return for her to garner support from the state-run National Pension Service to vote in favor of a controversial merger of Samsung C&T and Cheil Industries last year.

The merger had faced strong opposition from Elliott and other minority shareholders. Lee denied the allegation on Tuesday, saying the deal followed rules and regulations.

The merger paved the way for Lee to consolidate his control over C&T, the de facto holding company of the group. Lee's stake in C&T rose from zero to 16.5% after the merger, thanks to his 23.2% stake in Cheil.

Bloomberg, who also has a report on this story today, noted that "Park Ju Gun, president of corporate watchdog CEOSCORE in Seoul, said Tuesday’s public testimony ran the risk of cementing public opinion about the [Samsung] tycoon, even before he begins to exercise real control over the Samsung empire.

'His answers such as ‘I don’t know’ and ‘I don’t remember’ are all legal phrases and the result of legal training,” Park said. “Not only shareholders but also customers will doubt him and think how could somebody like him be able to run a global company?'" These were the same types of answers Hillary Clinton gave to Congress. These are replies the public knows full well are rehearsed and delivered to deny, deny, deny.

In the end you have to wonder if the prosecutors have any real power to unravel last year's merger that allowed Lee to take control over C&T. That would be real punishment. Instead, the dog and pony show may just rest with Samsung's vice chairman getting a warning and a slap on the wrist. Protesters may find this insulting and continue to demand real punishment dealt out to Samsung and all of those involved.

Is history just repeating itself with nothing really changing? On this subject Wikipedia notes that "On January 14, 2008, Korean police raided Lee's home and office in an ongoing probe into accusations that Samsung was responsible for a slush fund used to bribe influential prosecutors, judges, and political figures in South Korea." Doesn't that sound like what's happening again in 2016? It's just political theater to appease their angry countrymen.

The Wiki report further notes that "On April 4, 2008, Lee denied allegations against him in the scandal. After a second round of questioning by the South Korean prosecutors, on April 11, 2008, Lee was quoted by reporters as saying, 'I am responsible for everything. I will assume full moral and legal responsibility.' On July 16, 2008, The New York Times reported the Seoul Central District Court had found Lee guilty on charges of financial wrongdoing and tax evasion. Prosecutors requested Lee be sentenced to seven years in prison and fined 350 billion won (approx. $312 million USD). The court fined him just 110 billion won (approx. $98 million USD) and sentenced him to three years' suspended jail time. Months later, South Korean president Lee Myung-bak pardoned Lee so he could remain on the International Olympic Committee.

Can South Korea's judicial system really be taken seriously with judgements like that which left the door wide open for an immediate pardon? Ha! – What a joke.

To get the bigger picture of Samsung's criminal past, you could also read the Independent's brief overview report titled, "Tax evasion, bribery and price-fixing: How Samsung became the giant that ate Korea."