Home Archives Contact Us Subscribe Twitter MeWe Patently Mobile
Samsung is going to Experience the "Big Squeeze" in 2017 and their U.S. Market Share is Headed for a Crash
Are Apple and Samsung Racing to bring a Drone to Market? Evidence Discovered this week Suggests they may be

Samsung Set to Bomb their U.S. Note7 Zombies out of Existence on December 19 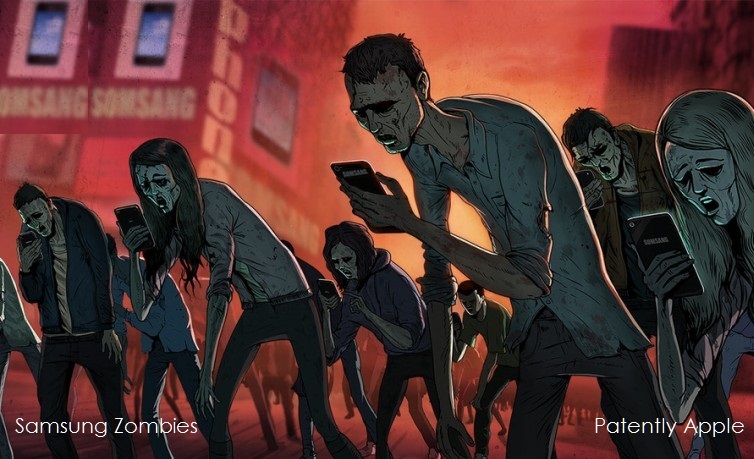 Back in early November Patently Apple posted a report titled "New Zealand Telecommunications to Officially Cutoff Samsung Note7 Zombies from Accessing the Net." I noted in the report that for years Samsung ads had mocked Apple's iSheep for lining up for old technology but now we're seeing Samsung Zombies who refuse to listen to Samsung's heir apparent plead with their customers to return their defective Note7 smartphones to the company. The stubbornness of these Zombies forced the the U.S. Department of Transport to announce that after October 15, Note7 users could be fined or risk prosecution if they used their smartphones on any U.S. flight. But Samsung Zombies continued to ignore warnings and it got so bad in New Zealand that their telecommunications industry announced Note7 customers would no longer be allowed on New Zealand's mobile network after November 18. So do you think that should have done it? No.

According to The Verge, Samsung is being forced to take drastic measures for the 'Special Samsung Zombies' in the U.S. and render their Note7 smartphones useless with a forced update being sent to their phones.

The Verge report states that "Samsung will render remaining Galaxy Note 7s in the United States useless and inoperable with its next and final update for the recalled smartphone. Today the company confirmed that it plans to release an update on December 19th — to be distributed across all major carriers within 30 days — that will "prevent US Galaxy Note 7 devices from charging and will eliminate their ability to work as mobile devices."

This final shutdown of the phone appears to be Samsung's last effort to get all Note 7s back in its possession. Samsung says that 93 percent of US-sold Note 7 units have now been returned, which puts about 133,000 phones unaccounted for. And with this next update meant to basically kill the device for good, Samsung will ramp up communication with customers still holding onto them for some reason:

"Together with our carrier partners, we will be notifying consumers through multiple touchpoints to encourage any remaining Galaxy Note7 owners to participate in the program and to take advantage of the financial incentives available."

Unbelievable. Samsung's U.S. Zombies have hit a new low. And yes, you can laugh now because at times, truth is stranger than fiction.