Samsung is going to Experience the "Big Squeeze" in 2017 and their U.S. Market Share is Headed for a Crash 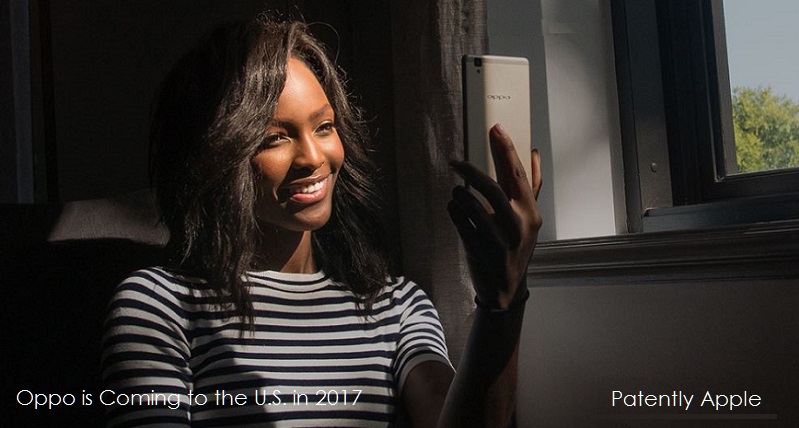 In November Patently Apple posted a report tiled "Huawei is Entering the U.S. Market in January and it's Bad News for Samsung no matter how you look at it." Huawei is the number 3 smartphone vendor in the world. In March Samsung was the number one smartphone in the U.S. with 28.8% market share and Apple at 23%. So the U.S. market is key for Samsung. But in 2017, three top Android smartphone vendors from China will begin selling their phones in the U.S.. Huawei will be the first, Xiaomi will be second and now Oppo will be the third. This is going to put the 'Big Squeeze' on Samsung's grip in the U.S. market.  Oppo was the number 4 brand worldwide last quarter and that's without a single smartphone being sold in the U.S.

The top Chinese smartphone vendors invading the U.S. market in 2017 is going to primarily hurt Samsung's Android leadership. Yet for Android fans it's nothing but good news as that will no doubt bring on price wars.

Indirectly this will influence the entire U.S. market and could put some pressure on Apple fans that are on the fringes. Price will no doubt persuade some mild Apple fans to drop out for an Android phone. Yet with Apple's 2017 anniversary iPhone supposedly being a killer edition, it's not likely to dent Apple's market share and could actually grow it next year. So the number one target to take the hit from the Chinese invasion is Samsung square on.

According to a new supply chain report out this morning, China-based smartphone vendor Oppo will begin to market its smartphones in the US as it aims to further ramp its shipments in overseas markets.

While starting to tap the smartphone market in the US, Oppo is no stranger to the US market as it was the number one vendor of Blu-ray players in the market previously, the sources noted.

Already having over 1,100 patents related to photographic technology, including about 200 registered globally, Oppo is expected to grab more market share globally optimizing its high-performance camera phones, commented the sources.

Oppo shipped over 25 million smartphones in the third quarter of 2016, becoming the fourth largest smartphone vendor globally with a 7% share, trailing after only Samsung Electronics, Apple and Huawei.

Oppo is gearing up for the U.S. market and our cover graphic is from Oppo. I guess you've noticed that the young lady isn't Chinese. Obviously Oppo has done their homework and they'll be gearing a lot of their ads toward minority communities. It's a smart business move and we'll see over time if it's effective.

Samsung will likely end 2016 as the number one Android vendor in the U.S. and it's likely their last year with that title. With quality smartphones coming from Huawei, Xiaomi, Oppo and Google, 2017 will be the year that we'll see Samsung dethroned as the number one Android smartphone vendor. And even if they somehow manage to retain a lead with locked in deals with carriers, their market share will be a far cry from being 28.8% that they held earlier this year. That's just a fact that you could take to the bank.