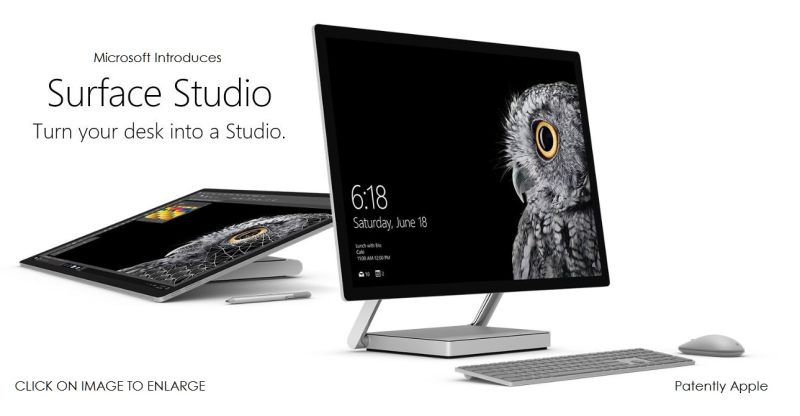 Earlier today Patently Apple covered a report by Bloomberg titled "How Apple Alienated Mac Loyalists." In one segment of that report they note that "People now have more options. Microsoft Corp., once derided by Mac loyalists for its clunky, buggy software, offers Windows 10, which provides the tablet type functionality Apple pioneered with the iPad. Microsoft's Surface computers offer Apple-esque quality and a well-reviewed creative paint program aimed at the Mac's audience. Sensing an opportunity, Microsoft called the MacBook Pro a 'disappointment' and said more users than ever were switching to its Surface" line of products. Of course it's all superficial and we called that out back in late October in a report titled "Microsoft's Big Boom in Surface Sales Last Quarter still Miles from Relevancy in Comparison to Apple's iPad."

Microsoft is under some grand illusion that they're catching up with Apple's product line-up. Last month we posted another report titled "Did Microsoft make Apple Blink with the Success of Surface Tablets? Microsoft's CEO Says Yes." It's the duty of Microsoft's CEO to pump up his troops and tell the press that Microsoft is forcing Apple to react to their innovation – even if It's not really true.

Of course it was Apple who first patented the hybrid notebook-tablet back in 2011 (published in 2013) as noted above where the display was held in by magnets. Isn't that exactly what the Surface Book is today? Yes, exactly, yet, Microsoft got it to market faster than Apple – because they're hungrier than Apple.

In an effort to distinguish their tablets from the iPad, Microsoft launched their Surface line of tablets with an attachable soft cover that had a keyboard on the inside so that the tablet could act as a wannabe notebook, which is how Microsoft marketed it. Yet before Surface ever came to market, Apple had patented that idea and others in that same vein. So no originality from Microsoft on that front – but they did get it to market faster than Apple, because they're hungrier than Apple.

Microsoft first debuted the PC tablet with a dumb plastic stylus that wasn't really meant for fancy writing or artwork. Apple had been working on that shortly before the iPhone ever launched. They kept the project under wraps and didn't want to launch a true 'smart pen' until the issue of latency could be dealt with. Their first patent discusing handwriting on a table-keyboard hybrid device surfaced in 2009 but had been filed in 2000. Yet it was Microsoft who brought a smart pen to market for their Surface tablets before Apple – because they were hungrier.

The great Surface Studio desktop that Microsoft launched on October 26, 2016 introduced a touchscreen display that could slant down to work on as an artist. Nice, really nice, but that was an idea Apple was on record with way back in 2010 and graphically presented below. 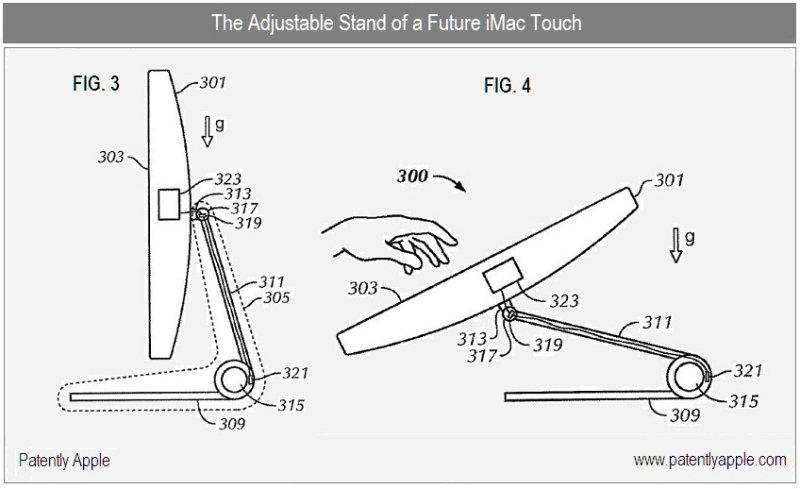 But again, Microsoft is the one who brought it to market – because they're hungrier that Apple.

So what are some of the so-called "new ideas" from Microsoft that are in the works. On December tenth Microsoft announced that they were going to introduce built-in cellular connectivity to notebooks in 2017.

Users will be able to join a wireless network automatically from their Surface tablet or notebooks by simply filling in a short form online and sign up for wireless data service for a specific term such as a week, a month, a quarter or a year without having to worry about a SIM Card.

Apple's engineers had been patenting their little hearts out on this idea for years (see our archives dating back to 2010). The graphic below spells that out clearly. And yet Microsoft will beat Apple to market with this idea – because they're hungrier than Apple. 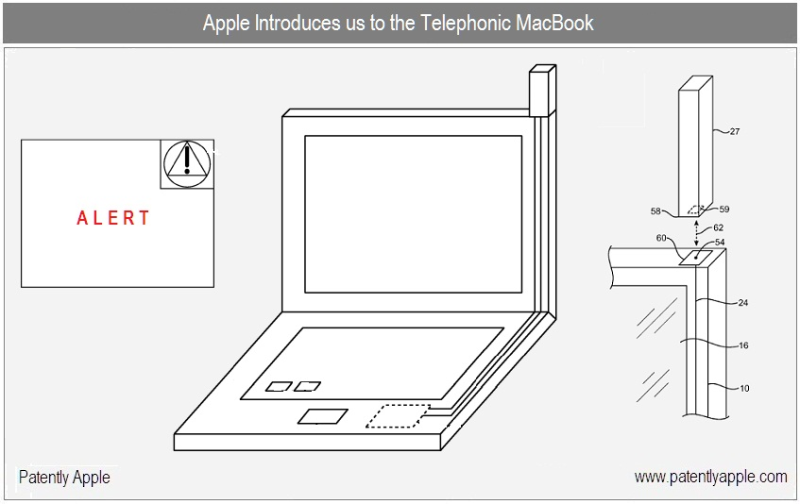 Apple had the leap on the entire industry with Siri and patents had pointed that it was coming to the Mac and yet it died on the vine. They waited so long to advance Siri to other products that everyone is now zooming past Apple with ease. Amazon's Echo surprised the market last year and now Google Home is out ahead of anything from Apple and Microsoft beat Apple by a country mile bringing Cortana to Windows 10.

Apple should have been ahead of the curve on all fronts but their competition is hungrier than Apple is at trying to get cutting edge products to market. You can swallow Apple's PR that they're not late, just waiting to make it perfect. Yet Apple TV is far from perfect and competing products are as good or better. It's more of an excuse.

Apple did get ahead of Microsoft with 'Force Touch' on the MacBook's trackpad and now on the iPhone and iPad. But guess what? Microsoft is already on this and is likely to introduce this feature to their Surface line-up as early as 2017. The patent for it was discovered today with three patent figures outlining it below. 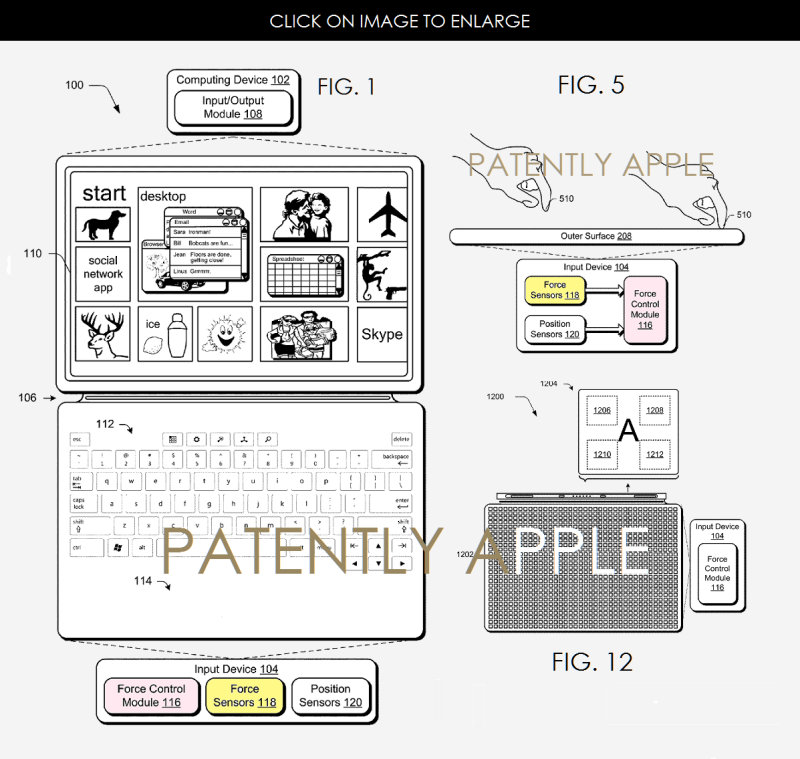 Beyond just being able to use force touch in the trackpad area, Microsoft state gestures could be used across the keyboard. "An example of an input device #104 that incorporates these techniques is illustrated in FIG. 12 [above]. The input device is implemented as a multi-touch resistive design with a rectangular grid #1202 of force-sensitive resistive (FSR) nodes illustrated as squares in the figure (arrayed with, for example, a 5 mm pitch). Combinations of the nodes are usable to define keys, trackpad functionality, and so on, an example of which is shown for the letter "A" 1204 that includes four nodes 1206, 1208, 1210, 1212. As an example, gestures may be supported across keys of the keyboard through combinations of nodes. The amplitude reported by each node is proportional to its conductance.

So when Microsoft grabs an idea from Apple that's in patent form they run with it like a thief in the night. When Apple beats them to market with an idea, they race like the wind to catch up because they want to beat Apple and their teams are hungry enough to rush to get it done, even if it's not perfect. Yet even with force touch Microsoft will add new functionality that Apple doesn't have yet or even wants, but they'll do it to get an inch ahead.

And lastly, last month we reported on a rumor that claimed that Apple Supplier Pegatron was working on a Microsoft Surface Smartphone trial run. Whether that's an accurate rumor or not can't be confirmed at this point in time, but what we can confirm is that a new Microsoft patent discovered this month plans to take two Apple ideas and combine them into one. They plan on taking 'slide to unlock' with Touch ID and make it a single feature to sign in as noted below. 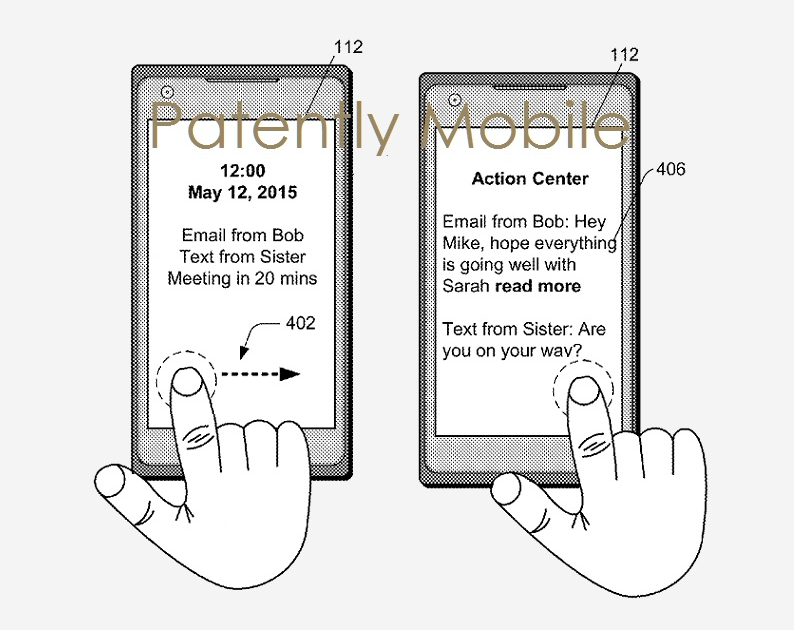 There's an old business saying that Lee Iaccoca used when he was trying to revive Chrysler: Lead, follow or get out of the way.

In Microsoft's efforts to resurrect from the dead after missing the mobile revolution led by the iPhone and iPad, Microsoft has humbled themselves to being great followers by taking Apple ideas found in patents and simply beating Apple to market with them.

While this practice hasn't made Microsoft rich to date, they know that the perception by the press and the public is that the ideas are theirs. The impression is that Microsoft is the one innovating at a faster pace than Apple. It's a false reality, but it's one that Microsoft and Samsung have learned to master because it works.

It's a damn shame that Apple overthinks everything and is slow to implement on their ideas. Yet at present it's hard to argue with their formula because they're still a tech giant that is crushing their competition where it matters. They own a crazy 91% of smartphone profits. They continue to lead in tablet sales and still inch out a lead in smart watches.

And yet Apple leaves many ideas on the table for their competitors to take up and run with. Why is Siri so far behind when they were years ahead of the competition? Why is Microsoft catching up to Apple on PC hardware and in a way exciting the market in doing so. It's clear that Microsoft is hungrier at present. That's the clear impression that they've carefully crafted and the press is eating it up.

Not to digress, but at one point in time Apple was the smartphone leader in innovation by a country mile. Even the way that Jony Ive introduced products and the way Apple packaged products was miles ahead. And now the Chinese have learned from Apple's leadership and get ahead of Apple in smartphones on every front.

Xiaomi's Mi Mix premium smartphone and Huawei's new 'Honor Magic' offer new features ahead of Apple's 2017 iPhone. Xiaomi pushed the fact that their new smartphone was designed by Phillipe Stark who worked with Steve Jobs. Huawei introduced the 'Honor Magic' that offers a curved glass larger diplay and AI they claim is better than Siri as it's more in-tune with Chinese customers than Siri. 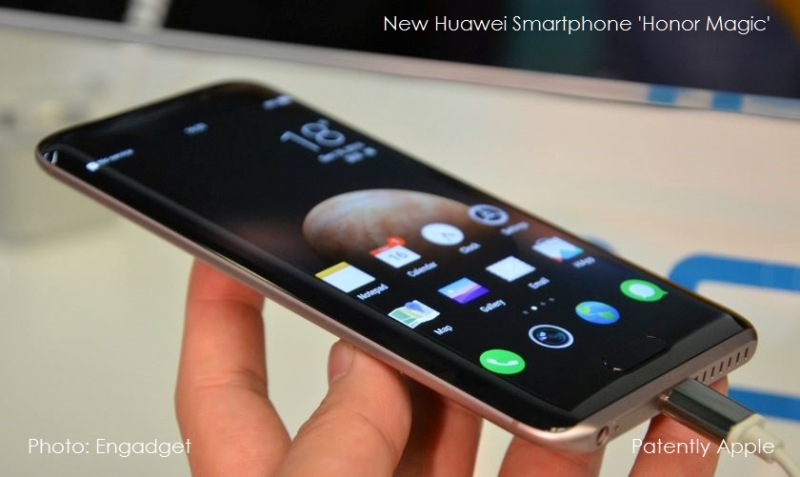 In the end and as stated earlier, Apple is still in the lead on many fronts and the most important of all, profits. But Microsoft is now gaining some momentum on the PC side and even on their Surface line and the press is eating it up. Apple was once the underdog and now Microsoft is. Everyone loves an underdog story. President-elect Trump was an underdog story, even though the press didn't think so, the majority of States and their citizenry did.

Mark Gurman is considered a legend in the Apple community with his connections within Apple and his report today stating that Apple isn't really behind the Mac as they once were was an alarm bell going off.

Apple's CEO says not to worry but we've been hearing that since the passing of Steve Jobs and Apple just doesn't seem to connect as they once did with the public. Not that they're going to fall off a cliff like Microsoft did over the last decade, but they are losing steam. So many articles have hammered this home of late.

The competition is hungry and I'm not sure Apple has that hunger in their belly that they once did. I don't even look forward to an Apple event anymore because there's never a real surprise. We know everything coming months ahead of time because of leaks from their suppliers. It's a joke. Even watching keynotes from their competiton is more fun of late.

While Apple remains the leader, I hope that somehow they could once again show the public and their Pro community that they're hungry to bring innovation to market at a faster pace and listen to their customers once in awhile instead of always having to make drastic changes to products that aren't necessary.

In the end, Microsoft's Steve Ballmer one laughed at Apple's iPhone coming to market and that arogance ran over him and the company shortly thereafter. Change happens quickly and Microsoft may seem to be the nice guy today for making free apps for the iPhone, but make no mistake about it – they hate Apple's guts and they want to bury Apple as quickly as they possibly could.

It may not happen in 2017, but they're rocking as fast as they can and the press is beginning to cheer them on. The press and the public are hungry for innovation; they want cool and they want it now. Here's to hoping that Apple will take a baseball bat to Microsoft's head in 2017 and take back the momentum they clearly lost in 2016.