Home Archives Contact Us Subscribe Twitter MeWe Patently Mobile
Are Apple and Samsung Racing to bring a Drone to Market? Evidence Discovered this week Suggests they may be
Microsoft to Announce Qualcomm Snapdragon based Tablets and PCs with Built-In Cellular Capabilities on Thursday 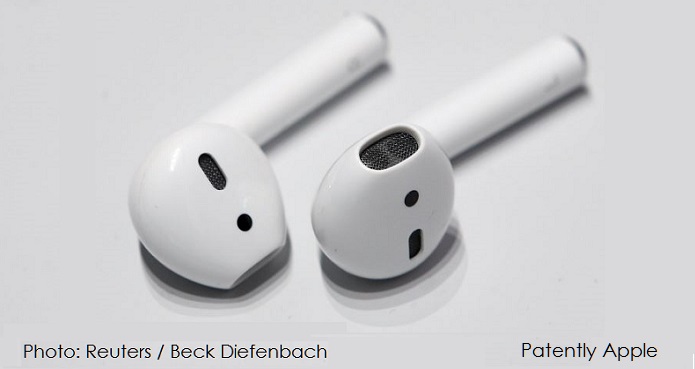 Apple introduced the all-new 'AirPods' during their September's "See You" event with a scheduled launch date set for the end of October. But later that month Apple delayed shipments without setting a release date in the future. Tick-tock, time is all but run out for a Christmas surprise. Engadget noted late last night that "For a company that places enormous emphasis on the pageantry of dramatically unveiling and releasing its products to a ravenous public, this is an unusual and humbling letdown."

The Wall Street Journal (paid subscription required) noted in their report posted after midnight that "AirPods have become a rare public misstep for Apple. In September, Apple marketing chief Phil Schiller hailed the earbuds as the entree to a wireless future, with seamless connection to an iPhone and a five-hour battery life.

At the September event, Mr. Schiller said the $159 headphones would begin shipping in October. Late that month, Apple said shipment was delayed. It hasn't provided an update on when the devices might be available or given a reason for the wait.

An Apple spokeswoman had stated that 'We don't believe in shipping a product before it's ready. We need a little more time before AirPods are ready for our customers.'

Patrick Moorhead, principal analyst at Moor Insights & Strategy added to the WSJ report by stating that 'the delay has damaged Apple's credibility and stoked frustration among consumers who can't charge their iPhone 7 while listening to music or conducting a call. It is an absolute black eye that they missed the holidays.'

The AirPod delay marks the first time Apple has postponed release of a product since its white iPhone 4 in 2010, Mr. Moorhead said. Then, Apple cited manufacturing challenges."

The oddity to this is the news of the delay into 2017 surfaced on November first. We were first to report that day that a Chinese business publication had stated that Apple's AirPods could be delayed until January 2017. The story wasn't believed and reports were posted shortly after claiming that the AirPods would be ready for Christmas. That's evidently not going to pan out in time for Christmas for everyone.

One of the technical reasons that have surfaced about the delay comes from a person familiar with the development of the AirPod. The person told the WSJ that the trouble appears to stem from Apple's effort to chart a new path for wireless headphones. In most other wireless headphones, only one earpiece receives a signal from the phone via wireless Bluetooth technology; it then transmits the signal to the other earpiece.

Apple has said AirPod earpieces each receive independent signals from an iPhone, Mac or other Apple device. But Apple must ensure that both earpieces receive audio at the same time to avoid distortion, the person familiar with their development said. That person said Apple also must resolve what happens when a user loses one of the earpieces or the battery dies."

To top off the week, Rush Limbaugh, who happens to have the highest-rated, most-listened-to talk-radio program in the United States with some 13.25 million unique listeners — aired a show titled "Is Apple losing its Edge?"

The show was a polite bitch session. Diving right in Limbaugh stated that "Apple has -- it's a wild guess -- anywhere from 115 to 145,000 employees, and so it's hard to understand why anything's late to market. It's hard to understand why, with that many people, how they would have to shut down their line of AirPort and AirPort express routers and the time capsules and all that. I'm like you; I want Apple to thrive. I want Apple to just win and win it, 'cause I love their stuff. I want Apple to continue to innovate. I want them to be on time. I want them to be leaders. And my big concern with Apple recently has been they can't build what they're designing.

He pointed to the iPhone 7 delays and Apple's AirPods. "Then the ear pods, you know, they take the headphone jack out of the iPhone and replace them with these wireless ear pods, and they announce they're gonna be available in October, then they say, sorry, they're not ready, and nobody knows when they're coming. And so people are going out and having to purchase replacement Bluetooth wireless headphones to use with their new iPhone 7s, and they're missing out on the sales they could be racking up now, these new ear pods."

There's not doubt that Samsung's Note7 was the debacle of 2016, period. Yet you'd have to be deaf dumb and blind not to notice that there's been more grumbling and disappointment expressed by many in the Apple community about products delays, product cancellations, missing ports, Apple dropping out of the display market, the lack of innovations for the iPhone and dongalitis than ever before. It takes very little to spark anger with Apple fans of late. They suppress their frustrations until a report allows them to vent and then bam – it explodes.

We posted a report back on November 14 titled "MacBook Pro Reviews fly in while Apostle Schiller continues to Warn us of the Evils of a Touch Display on Macs." There was a lot of anger from the pro community over Apple dropping the SD Card and other ports just to make the MacBook Pro look pretty instead of being practical for pros.

Yesterday, that anger rose again over at MacDailyNews on their coverage of the Rush Limbaugh report. Here are just a few of the comments capturing that sentiment:

"I know that Tim Cook will tell you there's a lot of amazing products in the pipeline, but that's not enough. If you love your customers, you don't leave them waiting for updates. You don't drop product lines without providing better alternatives. You don't deliver products, only to keep people waiting. And you deliver new products in a reasonable amount of time. There's a rumble in the Apple faithful. Things need to change."

"As I said in an earlier story, Apple is not meeting the needs of a large percentage of their users. I've been an an early adopter of virtually all mac hardware and software who, between my home and lab, has bought over 150 Macs since 1985. When people like me are questioning where Apple is going, that is a bad sign. It is indeed a rare issue that Rush and I would land on the same side of a debate showing that true Apple fans really are becoming concerned."

"When Jobs came back in the 90's one of the first tasks he took on was keeping the "power users" in the Mac community. Today's Apple seems to care nothing for the "power user". Within my University (50,000+) I've watch the Mac go from insignificant numbers among faculty and students to becoming the majority. Now, over the last two years I see Mac numbers DECREASING and decreasing rapidly – especially among students.

So, Apple is profitable, but of declining influence. I worry, that Apple could become the Blackberry of 2020. It took only 2-3 years for Blackberry going from owning the "smartphone" market to become a non-entity. Peak profits can rapidly tank to huge losses. Apple could go this way – especially if the "perceived" expert (i.e., power users) abandon them to other platforms, with the net result that the "average" user figures the other platform is superior."

You could check out more feedback on the MacDailyNews report here.

I continue to believe that Apple will deliver a hot new anniversary iPhone in 2017. From all this negative feedback and press, Apple has plenty of time to really deliver a hot new iMac and Mac Pro cranked up to satisfy the pro community and put their anger to rest. Apple may also introduce an iPhone model next year to work with Apple Pencil and more interesting product announcements. And to top it all off, with their tax rate dropping to 10% under President Trump, for bringing their cash home from overseas could lead to the unexpected announcement of a U.S. based Foxconn plant for future iPhone production over the next few years.

But for now, it's crazy to see how the delay of Apple's AirPods has stirred so much anger and coverage by the press and how it has quickly spilled over to customer dissatisfaction about everything Apple. It's like a tinder box that will take nothing to go up in flames. Hopefully Apple will come out swinging in 2017 and turn this negative sentiment around quickly before there's some real damage caused.

At the same time, Apple's executives have to stop patting customers on the head like pets telling them that dropping ports they want is in their best interest and that they'll just have to get over it in time. That's just pure arrogance. And lastly, Apple has to stop passing the buck that it's their customer's fault for product defects. That's starting to sound more like Samsung than Apple.

In the end, I think both Apple and their customers are hoping to get this year over with and start fresh with enthusiasm for 2017.

Update Dec 15: Apple posted a press release on Dec 13 stating that AirPods are available online as of the 13th and in stores beginning sometime next week. However in Canada as of today, it's six weeks delivery which equals 2017 as our report has reported on.