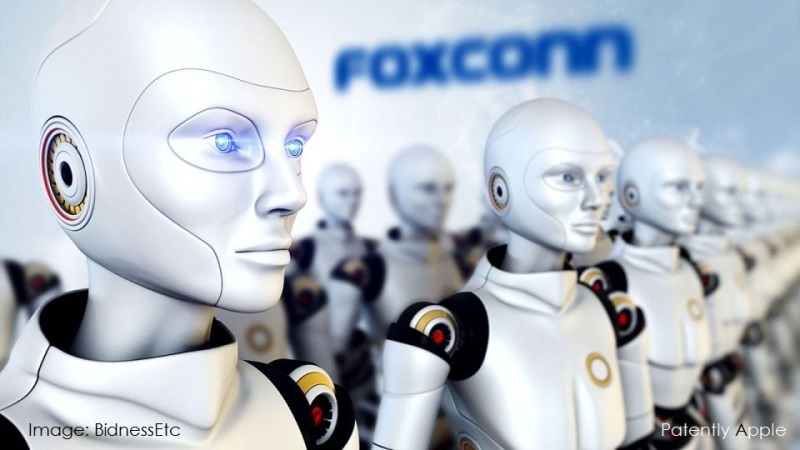 In 2014 Patently Apple posted a report titled "CEO of Foxconn: Robots will play a Crucial Role in the World's Third Industrial Revolution." In May 2016 we did a follow-up report titled "Apple Supplier Foxconn Reduces Workforce from 110,00 to 50,000 due to In-Plant Robotic Program." Since that time Foxconn has been pushing ahead at full speed to get their robotic plants up to speed through their three-phase plan with the third phase introducing full robotic automation for production.

It's being reported today that "Foxconn's factories in Chengdu, western China, Shenzhen, southern China, and Zhengzhou, northern China, have been brought into the second or third phase, Dai said.

There are 10 fully automated production lines at some factories, including table one in Chengdu, AIO (all-in-one) PC and LCD monitor lines at a factory in Chongqing, western China, and a CNC line in Zhengzhou, Dai indicated.

Foxconn has deployed more than 40,000 Foxbots, industrial robots developed and produced in house, at factories in China, Dai said. Foxconn can produce about 10,000 Foxbots a year.

Whether phase-three robotic automation will ever be applied to iPhone production is unknown. But all-in-one computers in some plants are fully automated and you have to wonder if that includes Apple's iMac. Once full robotic automation is a reliable reality, nothing will stop Apple products from being made in the U.S. at close to the same profit margins than in China. We may be a little ahead of ourselves at this point in time but Foxconn is determined to move more and more production into the third-phase and Terry Gou is one determined individual. He'll make it happen in the not-too-distant future.