Home Archives Contact Us Subscribe Twitter Facebook MeWe Parler Patently Mobile
Samsung Set to Bomb their U.S. Note7 Zombies out of Existence on December 19
Frustration and Anger over the AirPods Delay Continue to Spill over to General Anger Aimed at Apple

Are Apple and Samsung Racing to bring a Drone to Market? Evidence Discovered this week Suggests they may be

Yesterday Patently Apple posted a patent application report titled "Apple Invents an Improved Graphics System for Gaming or Possibly an Autonomous Drone Device." It was evident early on that this patent was not for Project Titan but rather aimed at a graphics system possibly for Apple's Metal API's or a future drone that could be controlled with an iPhone, iPad, MacBook which were listed in the patent. You're not going to drive your autonomous vehicle that way but you can a drone. This is why Apple pointed to an autonomous agent. Intel introduced a Drone at their CES keynote in 2015 and focused on its collision avoidance system using a RealSense camera; a camera Apple could easily have using PrimeSense technology. The video below is titled "Intel RealSense Collision Avoidance for Drones." How clear is that?

Apple creating an iDevice Accessory like a Drone would be super cool. I've been eyeing this device for some time now but haven't pulled the trigger yet because of how rapidly they're advancing. Now that I see that Intel focused on Collision Avoidance and that's what Apple's patent was about, I'm more convinced that this is now on Apple's radar screen. They sell them and are probably seeing the enthusiasm that consumers have for this next generation photography device dream.

By chance, today we learned via a Korean tech report that Samsung was granted a desig patent for a drone.

The report noted that "Samsung Electronics has been granted a patent on the design of a disc-shaped drone, hinting that the electronics giant may make inroads into the booming market for commercial drones, according to South Korea's patent authority Friday.

The patent was filed in April this year and formally registered earlier this month, the Korean Intellectual Property Office said.

Samsung said the drone is designed to be equipped with a camera. Unlike conventional drone designs, the Samsung drone features a circular design with a fan in the middle.

The drone's design is inspired by a "disc-shaped spacecraft," Samsung said, adding that the drone is made of synthetic resins and metallic materials.

After a little digging, Patently Apple came across some information from the Korean Patent Office. Below are a few of the granted patent design figures. This would really be a cool new device for Apple to get into as an accessory. It's good for iDevice sales and great to show off advanced cameras and photos. Will Apple actually decide to go this route? Only time will tell. But I sure hope so. 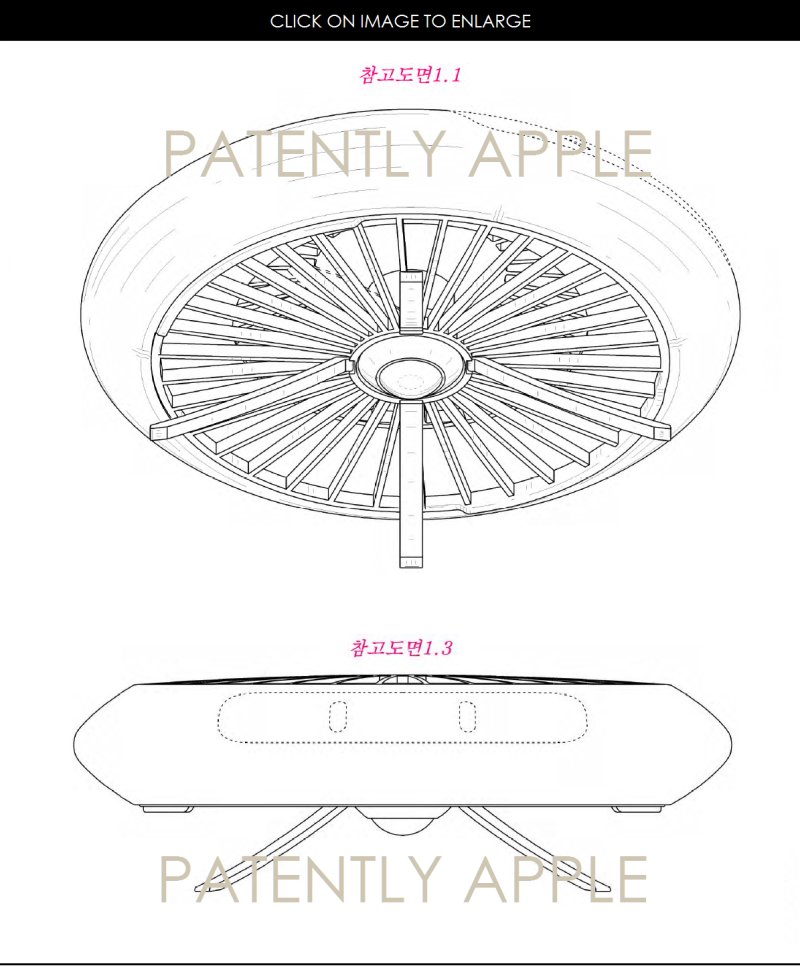 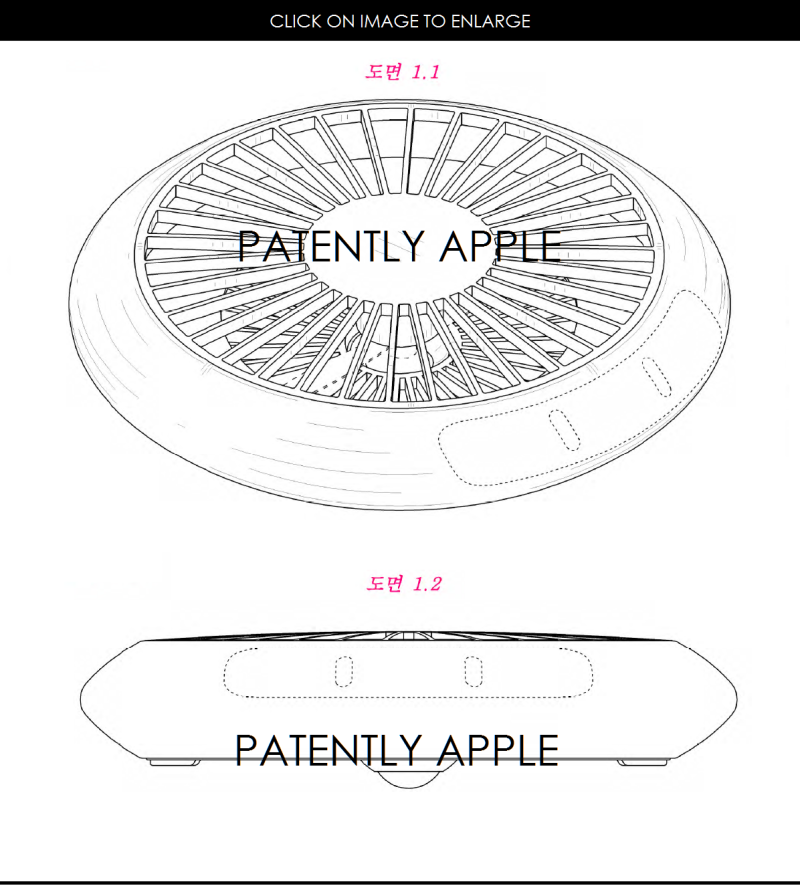 Parts of the basic information about granted patent design is noted below which was interpreted through Bing:

1) material is the resin and metal years.

2) expressed as part of part of the design with a solid design registration is a part.

If the design of the Central won three) go to the diagonal display shades of dome shape transparent materials, and is equipped with a camera on the inside of the

4) won the design motif of the ship shape of the disc. The gist of the contents of the design creation "Drones" and combined with design and creative content in the shape of the point.