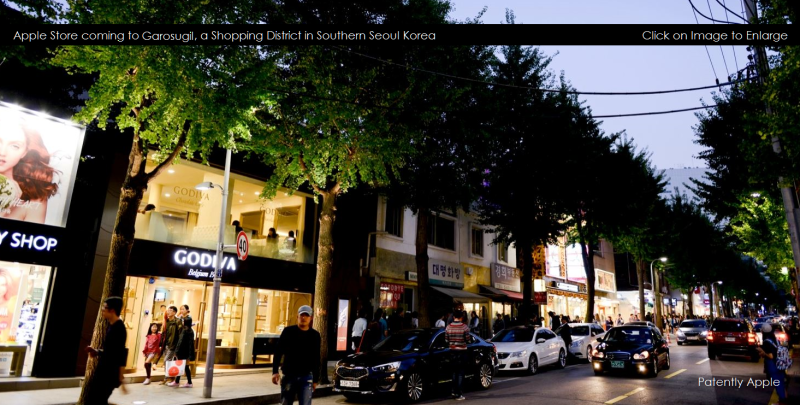 Last week Patently Apple posted a report titled "Korean Critics Continue to Complain about the Lack of a Flagship Store and Ongoing Poor Service." Although I had posted a report back in September pointing to Apple scouting prime locations in Seoul for their first flagship store in 2017, I guess they didn't get the memo. To squelch the growing anger in the Korean press, word was put out by "mobile and architecture sources" that Apple's first flagship store is actually under construction at this very moment. With Apple's 2017 anniversary iPhone potentially being a game changer, it's going to be the best time to waltz into Samsung's backyard and give Korea's loyal iPhone fan base something to really get excited about. Especially because it's coming to one of the hippest places in Seoul, the Garosugil shopping district.

According to a Korean tech site report today, Apple's first flagship store is under construction in Garosugil, a shopping district in Southern Soul and is expected to be completed in November 2017. The name 'Garosu-gil' is from the Korean word which means tree-lined streets, as the area is adorned with ginkgo trees as noted in our cover graphic (Click on image to enlarge).

The latest news comes after Apple posted job openings in September seeking Korean employees in various areas including sales, specialists and "Geniuses." "Geniuses" are technicians who carry out in-store repairs of Apple products at the Genius Bar.

Some Korean analysts were quick to respond to the news by saying "it's too early to tell whether the opening of one store would make such a big impact in the market which is already dominated by local smartphone makers."

Bae Eun-joon, an analyst at LG Economic Research Institute stated for the report that "Because Samsung and LG have built a solid client base here in terms of marketing, service and repair, Apple may not see a significant difference in sales through the opening of one Apple Store. Although it may be a different story if and when Apple announces plans to expand stores and repair shops nationwide."

The combined sales of Samsung and LG smartphones account for around 80 percent and iPhone has around a 20 percent share in the domestic market, according to Korea Internet & Security Agency.