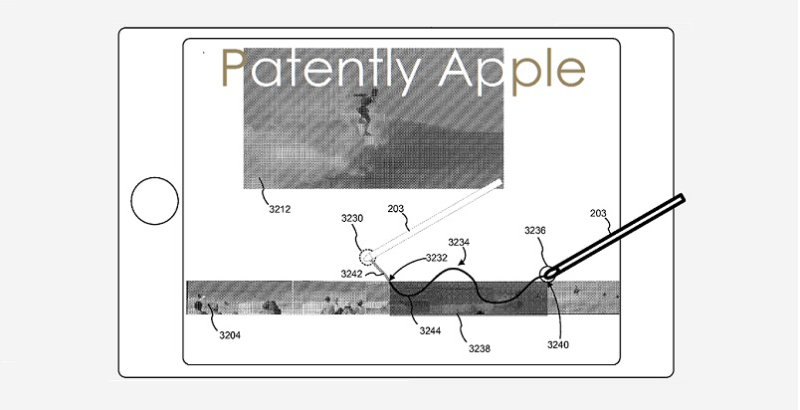 Back in September Patently Apple posted a report titled "Apple Could Send Samsung into a Panic Today if the iPhone 7 works with Apple Pencil." In hindsight I'm sure Apple must have seen an opportunity of massive dimensions go down the drain when the Samsung Note7 ended with it being discontinued. Without Apple Pencil working with the iPhone, die-hard Note7 users weren't going to switch to just a standard smartphone. In an interview with Tim Cook it was noted that he had stated: "And if you've ever seen what can be created with that pencil on an iPad or an iPhone, it's really unbelievable." It was clear that Cook had seen a future iPhone working with Apple Pencil and so we know it's coming, it's just a matter of when. In addition, Bloomberg had reported back in August that Apple Pencil would work with a larger array of apps on the iPad in 2017. One of today's patent applications that were published by the US Patent & Trademark Office reveals Apple Pencil working with the iPhone and with an expanded array of applications for the iPhone and iPad.

Apple notes that some electronic devices use a stylus associated with the device to provide additional methods of input to a touch-sensitive display of the device. For example, some cellular phones, laptops, and tablets have the capability to receive inputs from a stylus. 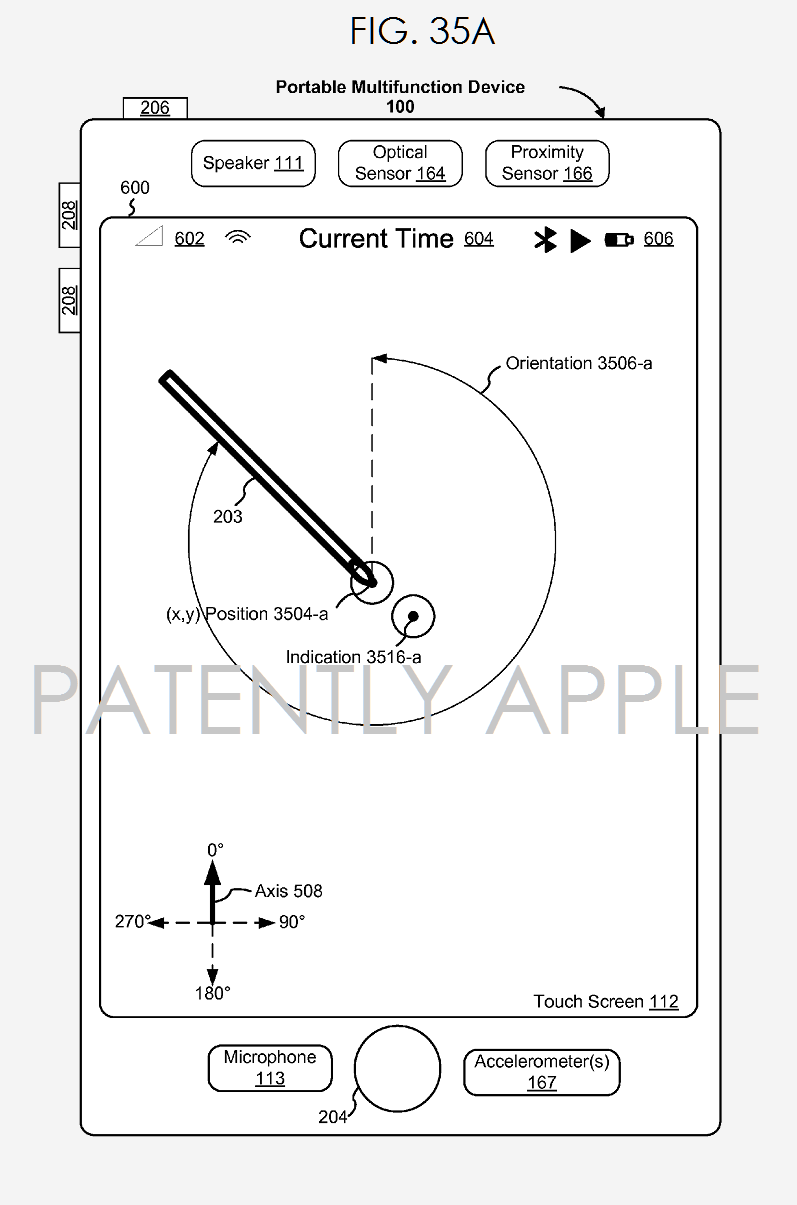 Apple Pencil to Work with Apps Beyond just 'Notes'

Apple pencil will one day work with iMovie and/or Final Cut Pro as indicated in patent FIG. 32D below. 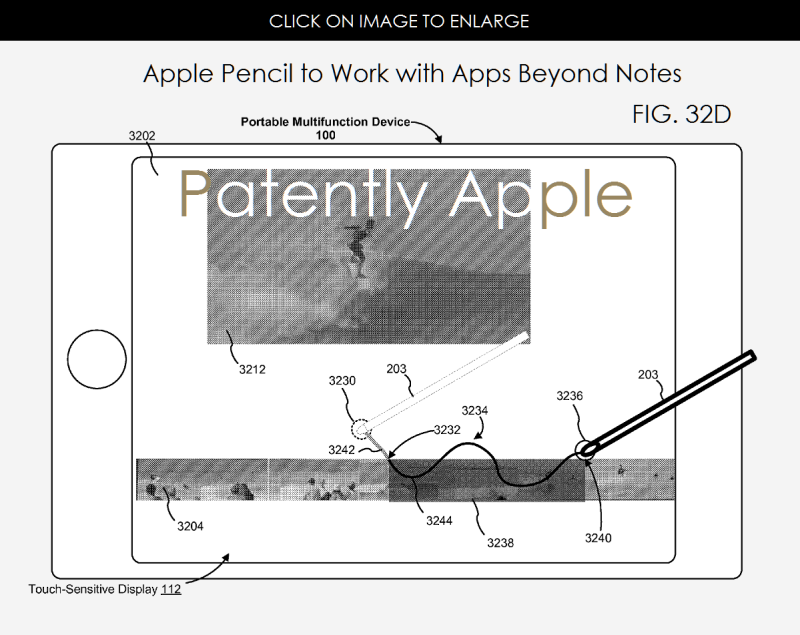 Apple's patent FIG. 32D noted above shows that Apple Pencil will work with apps beyond its current single app of 'Notes." This patent figure illustrates an example of selecting a portion of video using a gesture that includes contact outside the timeline area. In this example, a gesture provided, e.g., using stylus #203 includes a contact of the stylus on a touch-sensitive display at a position #3230 of a video editing application #3202 that is outside of the timeline area #3204.

In the future Apple Pencil will work Apple's Messages App 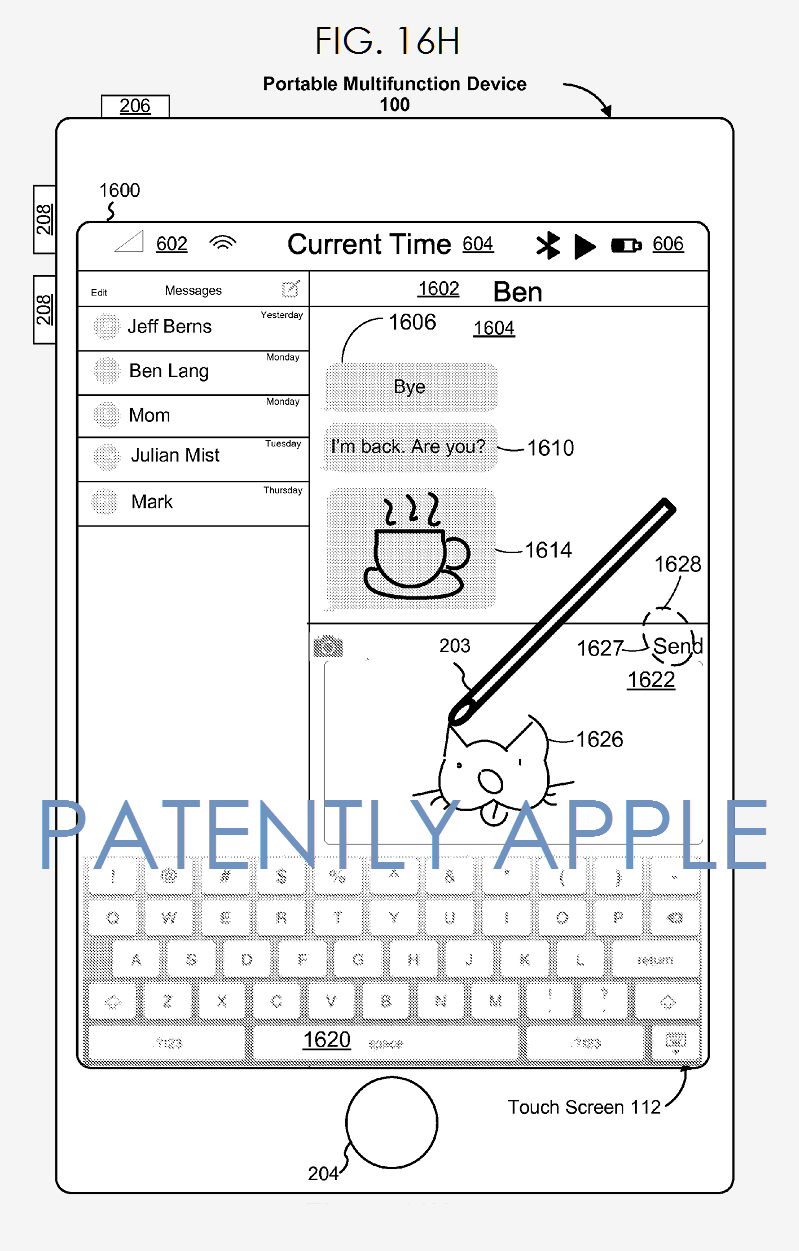 Accessing a Drawing App in a Restricted Mode

Beyond showing us that Apple Pencil will work on the iPhone and with different apps, Apple discusses a new "restricted mode" that's in the works. In Apple's patent FIGS. 21M, 21N and 21P below we're able to see an example of displaying a drawing application in response to swiping from an edge of touch screen with a stylus. FIG. 21M illustrates an example of displaying, over lock screen user interface, one or more marks (e.g., mark #2141 and mark #2142) that correspond to inputs from the stylus associated with device. In this example, liftoff of the stylus (e.g., liftoff of the stylus between making mark 2141 and making mark 2142) does not cause display of the drawing application. Instead, in response to swiping from an edge of the touch screen with the stylus, the device executes a drawing application in a restricted mode so that a user could access their drawing app quickly in a restricted mode to make a change or two in a drawing. 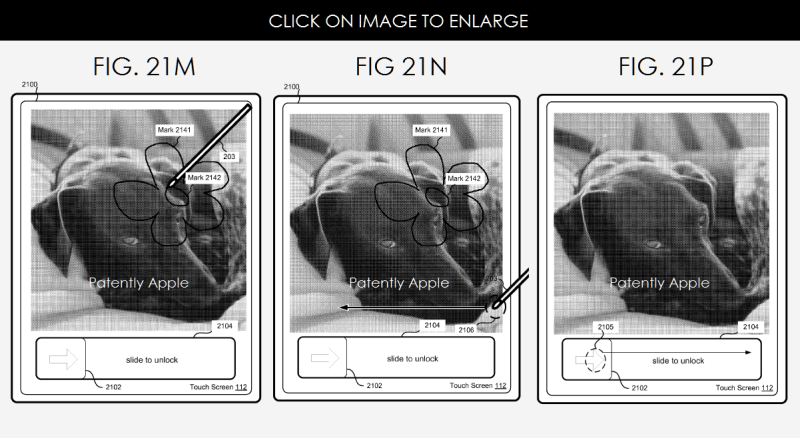 Apple's patent application 20160364091 has 150 or more illustrations to look at with details galore in this Apple Pencil invention that I'm sure has more buried little gems to be found. In fact the details go on for another three patents including 20160364026, 20160364027 and 20160364025. Considering that this is a patent application, the timing of the features outlined in this report to market is unknown at this time.