Home Archives Contact Us Subscribe Twitter MeWe Facebook Patently Mobile
Apple Indoor Mapping Invention Automatically Determines the Mall Floor a user is on and Updates the Floor Plan
It's Crunch Time: Will Samsung Pull the Trigger and Launch a Foldable Smartphone in 2017 or Chicken Out?

Both Samsung and Apple have been building treasure chests full of patents relating to mobile device designs that will have bent edges, rounded wraparound glass embodiments and those that will fold over like a book. This year there have been a series of rumors regarding a future iPhone with a glass wraparound design making the rounds and it's been a year with a lot of IP activity relating to future iPhones with a glass embodiments (one, two and three) and at least one regarding a folding iPhone. Today the US Patent & Trademark Office published a patent application from Apple titled "Electronic Devices with Display and Touch Sensor Structures." The patent filing details how new touch sensors will be lined within the device's entire outer cavity so that all sides of a device (top, bottom and left and right walls) could contain touch sensors. Some sensors could be designed for gaming on the back surface of a device to control game play. Apple also notes that physical buttons may be replaced with virtual controls so as to keep the hardware design nice and clean and button free.

In one aspect of Apple's patent filing they note that "In gaming applications and other applications, it may be desirable to use a touch sensor on the rear surface of device 10 to gather touch input while displaying associated visual information on a display on the opposing front surface of device. This aspect of Apple's invention dates back to a 2006 patent filing that we highlighted in a 2010 report titled "Apple: The Tablet Prophecies." This is illustrated above as patent figure 14 just to show you how far back this idea dates back to.

For Apple's patent FIG. 3 they note that touch sensor layer #32 may be formed on the inner surfaces of some or all of these opaque walls to provide the exterior surfaces of these portions of device with touch input capabilities. The walls described are the side walls 12-1 and 12-4 and back surface or wall 12-5 of FIG. 3.

Apple notes that when the device is in a landscape mode as a camera, the device may provide virtual buttons related to a camera such as a virtual shutter button, volume controls or a slider button to control image settings such as screen brightness, color settings and contrast settings.There's a sense that the camera buttons may only appear when the iPhone is in landscape mode and then return to presenting volume controls when in portrait mode. This is something that could only work if the design supports virtual elements. That would be very cool. Apple's invention covering virtual controls for the iPhone first surfaced back in August 2014. 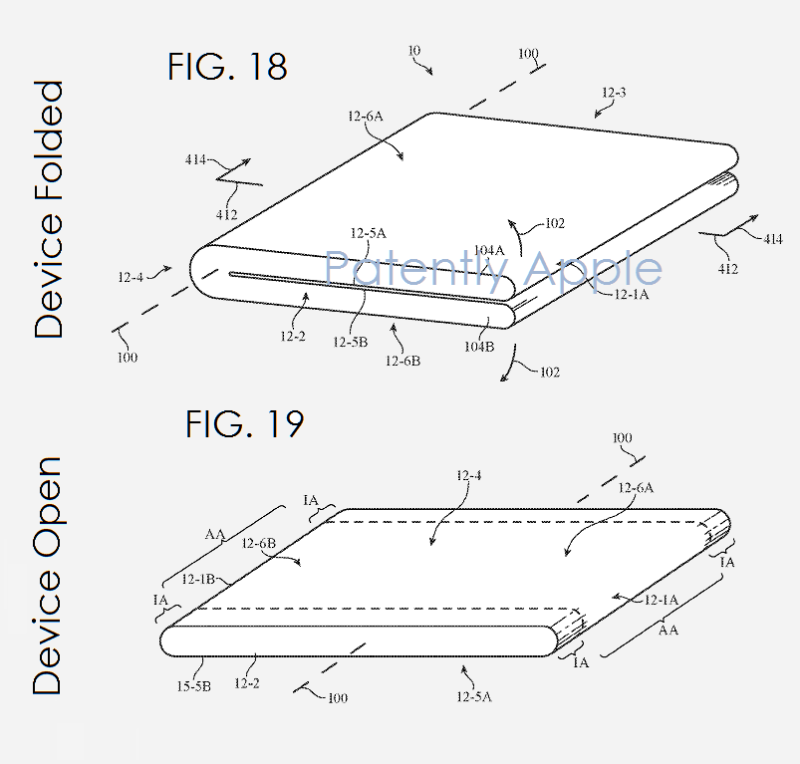 Apple has been working on folded devices for some time now as noted in our Flexible Display Archives. Today's patent application marks Apple's fourth flexible display/foldable display patent published in the last 30 days. While Samsung leads Apple in the sheer number of patents regarding future folded devices, there's no doubt that Apple is spending more R&D time on a possible future flexible, bendable and/or foldable smartphone as noted in patent FIGS. 18 and 19 above illustrating a phone in a closed and open state.

Apple describes the device as being able to be folded like a book. Support structures may be formed form an elastomeric material and/or other bendable materials to allow the device to be opened and closed repeatedly.

In the illustrative configuration of FIG. 14 below we're able to see a display and/or touch layers that may have curved shapes that match the curved profiles of curved sidewalls 12-4 and 12-1. 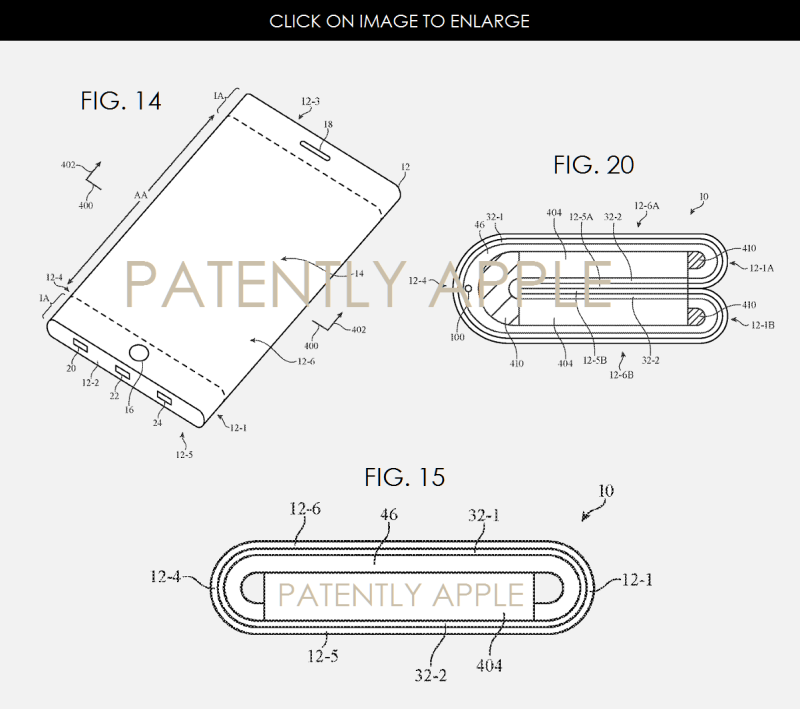 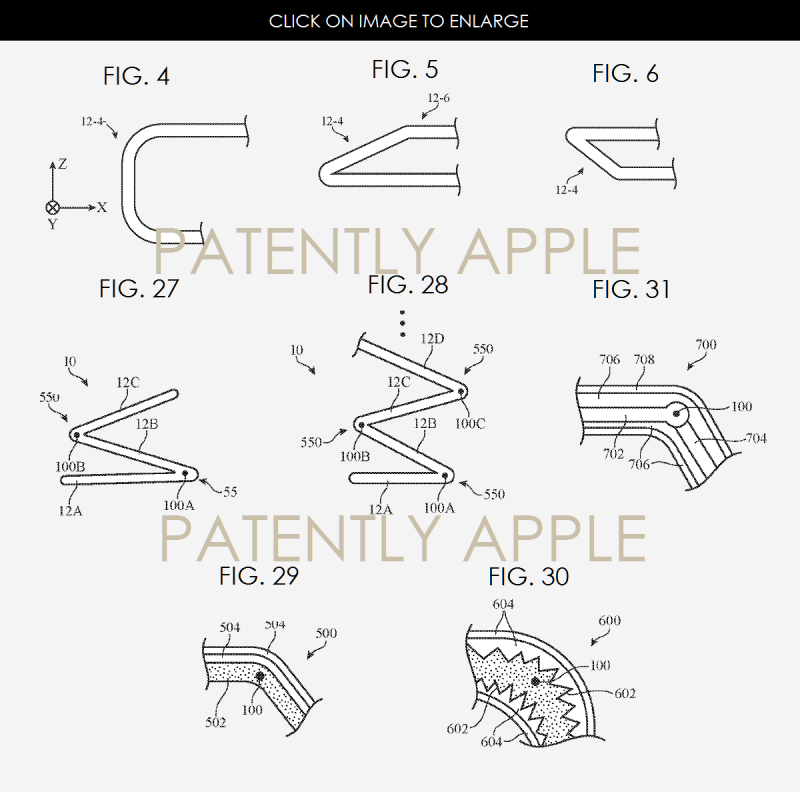 Apple's patent FIG. 27 illustrates a side view of a device with two flex points, with FIG 28 with three flex points. Apple's patent FIGS. 29, 30 and 31 illustrate a portion of flexible device with hinge regions. Specifically, FIG. 31 is a cross-sectional side view of a flexible electronic device hinge region having mating structural members that rotate with respect to each other about a pivot structure such as a pin to form a hinge.