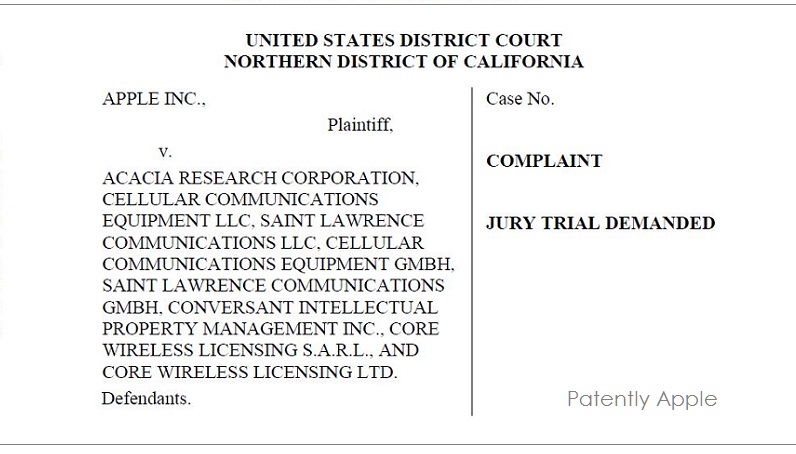 On September 17, 2016 Patently Apple posted a report titled "Apple lost a Patent Case based on a Nokia Patent. Will the EU now Open an Antitrust Case against Nokia as Promised?" Obviously we were bang on because Apple is going to wait for the EU to act, Apple has launched an antitrust lawsuit against Acacia and all those listed on the docket noted in our cover graphic. The filing has a notation at the top that states: "REDACTED VERSION OF DOCUMENT SOUGHT TO BE CONDITIONALLY SEALED."

Apple's Introduction of the Case

Apple Inc. ("Apple") brings this action to remedy a continuing anticompetitive scheme. Acacia Research Corporation and its subsidiaries (collectively, "Acacia") and Conversant Intellectual Property Management Inc. ("Conversant") and its subsidiaries (collectively, "Conversant") have respectively colluded with Nokia Corporation (itself and through its affiliates Nokia Solutions and Networks Oy and Nokia Technologies Oy (collectively "Nokia")) to obtain from Nokia thousands of patents as part of a plan to extract and extort exorbitant revenues unfairly and anticompetitively from Apple and other innovative suppliers of cell phones, and ultimately from the consumers of those products. Acacia, Conversant, and many other patent assertion entities ("PAEs") have conspired with Nokia to use unfair and anticompetitive patent assertions to improperly tax the innovations of cell phone makers.

This conduct is all the more pernicious because it unfairly and anticompetitively evades binding commitments that Nokia made to license declared standard essential patents ("SEPs") on fair, reasonable, and non-discriminatory ("FRAND") terms. Nokia positioned itself to claim that its patents cover technologies included in telecommunications standards by repeatedly assuring standard-setting organizations that it would license its patents fairly. Yet Acacia and Conversant are now conspiring with Nokia in a scheme to diffuse and abuse such patents and, as the PAEs and Nokia fully intended, monetize those false promises by extracting exorbitant non-FRAND royalties in ways Nokia could not.

Acacia's and Conversant's illegal conduct takes place against the backdrop of Nokia's failure as a supplier of cell phones. In 2011, Nokia remained a major supplier of cell phones, but, due to its failure to innovate, was facing business prospects so dire that Nokia ultimately exited the cell phone market. As Nokia's CEO had announced to employees the previous year, Nokia was standing on "a burning platform." Unable to compete with innovative companies such as Apple—which had developed a revolutionary hardware and software platform—Nokia quickly transformed itself. It changed from a company focused on supplying cell phones and other consumer products to a company bent on exploiting the patents that remain from its years as a successful cell phone supplier. In its changed form, Nokia has sought to extract exorbitant patent royalties from Apple and other cell phone makers, and Acacia and Conversant have been its willing conspirators to that end.

With the active collaboration of Acacia and Conversant, Nokia avoids licensing its own portfolio directly and transparently, though it is fully competent to do so. Instead, Nokia has 6    divided its patent portfolio and distributed portions of it among Acacia, Conversant, and other PAEs, while retaining an interest in revenues generated by those PAEs. Nokia then enlists mercenary PAEs including Acacia and Conversant – that have offered their services aggressively to threaten, sue, and thereby extract exorbitant, above-market royalties from cell phone makers, including for declared SEPs. The reasons why Conversant and Acacia have conspired with Nokia are clear. The PAEs can take advantage of the fact that—unlike Nokia, which now focuses on the network business—they produce nothing at all and therefore have no desire or need for "patent peace," and can impose disproportionate discovery and litigation costs on the product companies they sue. By conspiring with Nokia in a scheme to disperse the Nokia portfolio to the PAEs, Acacia and Conversant can obtain more royalties from product companies than Nokia cold have obtained through direct and transparent licensing, and then share with Nokia the ill-gotten fruits of their illegal exploitation. 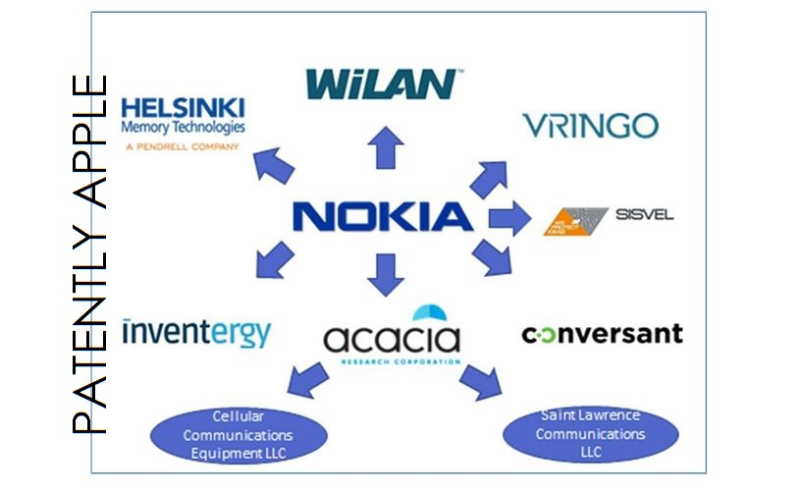 Acacia and Conversant are chief partners with Nokia in an overarching patent transfer scheme that has resulted in at least nine PAE partners armed with former Nokia patents, many of which have embarked on serial, abusive, and anticompetitive assertions of their former Nokia patents (both SEPs and non-SEPs) against Apple. These Nokia partners have sued Apple at least twelve times based on former Nokia patents alone. Acacia and its shell subsidiaries, themselves, have sued Apple in the United States and abroad more than forty times, based on patents they acquired from Nokia or others, demanding exorbitant royalties based on unsupported infringement claims. For its part, Conversant, through its subsidiary Core Wireless Licensing S.a.r.l. ("Core Wireless"), has asserted over two dozen patents against Apple. These serial assertions and litigations have forced Apple to incur multiple millions of dollars in defense costs, precisely the sort of leverage that Acacia and Conversant intended to create when they agreed to conspire with Nokia. In sum, by conspiring with Nokia to obtain weak Nokia patents and then using them to extort product innovators, Acacia and Conversant have engaged in widespread violations of competition law and breaches of FRAND commitments.

That Acacia and Conversant have fully intended to maximize the total royalties that can be extracted from Apple and other cell phone makers using former Nokia patents is apparent from the structure of their agreements with Nokia: Nokia has retained the right to receive a large portion of any royalties and settlements that Acacia, Conversant, and their respective subsidiaries extract. And, collectively, Nokia and its partners are demanding far more in royalties than Nokia could have sought on its own. Unless enjoined and remedied, the conduct described herein will continue to injure Apple, other participants in industries that are vital to the national economy, and consumers in the United States and elsewhere.

Acacia's and Conversant's schemes to conspire with Nokia for the abusive and anticompetitive diffusion of Nokia's patent portfolio has already imposed extraordinary costs and burdens on the cell phone industry. Rather than defend against patent assertions by Nokia alone, Apple and other victims of the scheme are subjected to serial assertions by Acacia, Conversant, and their shell subsidiaries, who (along with other PAEs) have offered up their services to add to the cumulative burdens on Apple, other suppliers of cell phones, and U.S. and other consumers.

Apple brings this action to address the harm it has already suffered from the violations of federal antitrust and state unfair competition laws and breaches of contracts set forth herein. Apple has suffered damages from excessive royalty payments and the costs and burdens of defending against the barrage of patent litigation unleashed by Acacia and Conversant, along with other PAEs. Apple also seeks injunctive relief to put an end to the illegal conduct and the resulting harm to Apple, the broader industry, and U.S. and other consumers, and to unwind the patent transfers that have enabled the anticompetitive conduct described herein.

Count #4: Conspiracies to Monopolize the SEP TECHNOLOGY MARKETS (section 2 of the Sherman Act)

Apple Respectfully Requested the Following Relief from the Court

C. That Defendants' unlawful conduct be judged a breach of contract;

D. That Apple recover damages against Acacia and Conversant, including incidental and consequential damages, in an amount to be determined and multiplied to the extent provided by law;

E. That all contracts or agreements that Nokia, on the one hand, and or Acacia or Conversant, on the other, entered into in violation of the Sherman Act, Clayton Act, Cal. Bus. Prov. Code § 17200, et seq., or in breach of Nokia's FRAND undertakings be declared void and the patents covered by those transfer agreements be transferred back from Acacia and Conversant (or their respective subsidiaries) to Nokia;

F. That all patents transferred by Nokia to, or acquired by, Acacia or Conversant (or their respective subsidiaries) in violation of the Sherman Act, Clayton Act, Cal. Bus. Prof. Code §     17200, et seq., or in breach of Nokia's FRAND undertakings be declared unenforceable;

G. That Acacia and Conversant be enjoined from seeking injunctions against Apple based on declared SEPs for which Nokia made FRAND commitments;

H. That Apple be awarded expenses and costs of suit, including reasonable attorneys' fees, to the extent provided by law; and

I. That Apple be awarded such additional relief as the Court may deem proper.

Apple's antitrust case presented in today's report was filed yesterday in the California Northern District Court, San Jose Office. At present, no Judge has been assigned to the case.