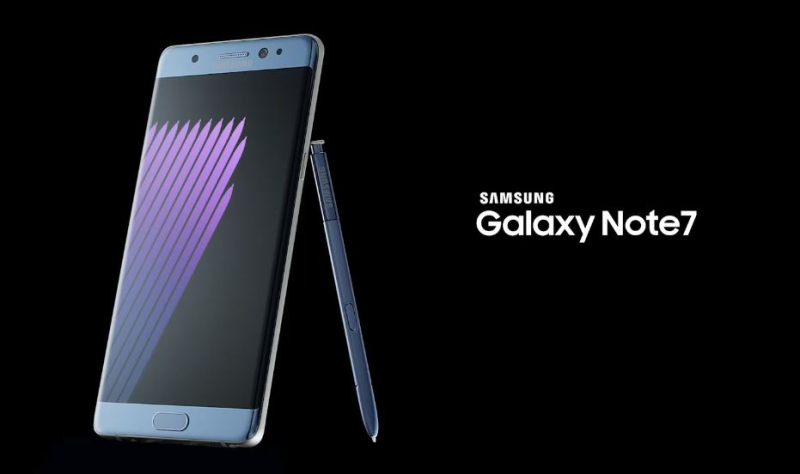 In October Patently Apple posted a report titled "Samsung's Heir Apparent was hoping for the Galaxy Note 7 to outflank the iPhone 7." Instead of outflanking the iPhone 7, the Note7 became an albatross as the company struggled to cope with a string of their flagship devices catching on fire. Days later we posted another report on this subject wherein we noted that Samsung admitted to being clueless as to the root cause of the fires. In fact blaming it on a particular battery from their SDI division wasn't making sense. To this day Samsung has not officially published a credible report outlining the problem with the Note7. Until Samsung publishes their final findings, if they ever credibly do, a company by the name of Mecha Industries, Inc. has come up with a credible theory.

Mecha Industries Inc. owns the trademark "Instrumental." It appears to be a marketing name for a division of theirs that makes testing tools. In their blog they note that "Instrumental technology helps hardware companies find and fix issues caused by workmanship, part quality, process, and design. Our system is a combination of hardware and intelligent software that enables engineering teams to take control of their data."

Their company blog notes that in "September, the first reports of Samsung Galaxy Note 7 batteries exploding hit social media. At first, Samsung identified the issue as one relating to the lithium polymer battery manufacturing process by Samsung SDI, where too much tension was used in manufacturing, and offered to repair affected phones. But several weeks later, some of the batteries in those replacement units also exploded once they were in the hands of customers -- causing Samsung to make the bold decision to not only recall everything, but to cancel the entire product line.

This is every battery engineer's nightmare. As hardware engineers, the Instrumental team followed the story very closely. Different sources at Samsung reported different reasons for why the batteries shorted: tension in the cell fabrication, squeezing the layers too much during processing, poorly positioned insulation tape, etc. These theories all suggest a battery part-level issue, likely due to Samsung pushing the manufacturing parameters a little too far in order to make the highest capacity battery in the smallest package.

Yet the Instrumental team believed that there was more at play here and in fact perhaps a fundamental problem with the design of the phone itself.

The Instrumental team decided to perform a teardown to see if they could figure out where the problem was that caused so many fires. The team quickly pointed to battery's separator layers. The separator layers allow ions (and energy) to flow between the positive and negative layers, without allowing those layers to touch. If the positive and negative layers ever do touch, the energy flowing goes directly into the electrolyte, heating it, which causes more energy to flow and more heat -- it typically results in an explosion.

The Instrumental team then noted that what's interesting is that there is evidence in the design of an intellectual tension between safety and pushing the boundaries. Samsung engineers designed out all of the margin in the thickness of the battery, which is the direction where you get the most capacity gain for each unit of volume. But, the battery also sits within a CNC-machined pocket -- a costly choice likely made to protect it from being poked by other internal components. Looking at the design, Samsung engineers were clearly trying to balance the risk of a super-aggressive manufacturing process to maximize capacity, while attempting to protect it internally. 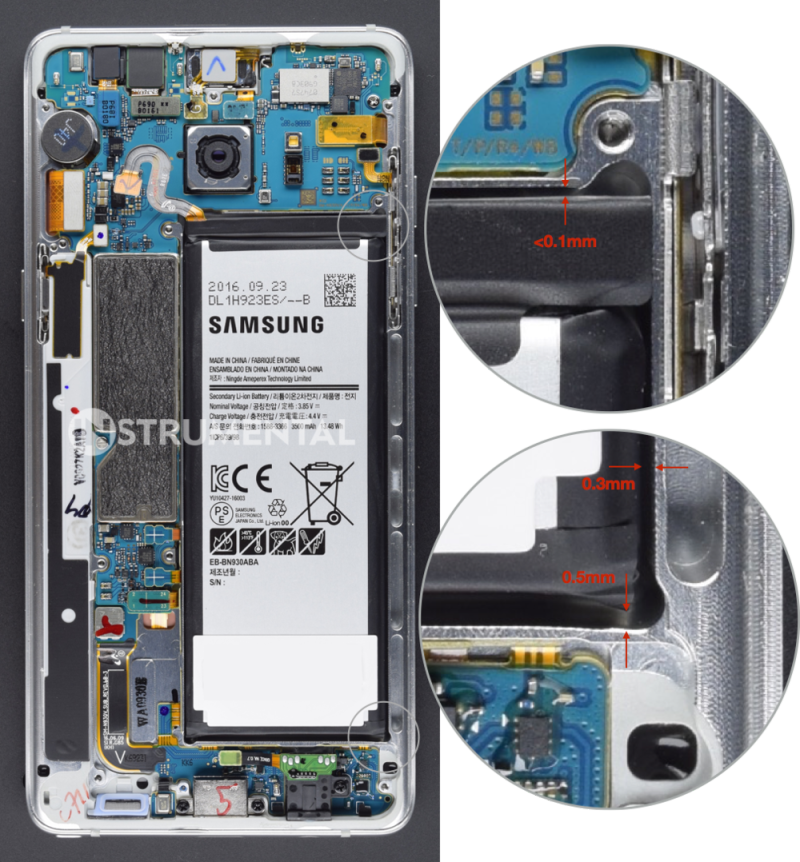 In the graphic above, "A high resolution image from an Instrumental station shows the tight XY clearances to the battery.  It's also possible to see the pocket formed by aluminum walls on all sides, which prevents the rough edges of the PCB from touching the battery pouch."

The Instrumental team noted that while the design and validation process for a new product is challenging for everyone, in the case of the Note7, Samsung's engineering team took a deliberate step towards danger, and their existing test infrastructure and design validation process failed them. They shipped a dangerous product. That this is possible at one of the top consumer electronic companies in the world is humbling -- and demonstrates the need for better tools." Instrumental is building them.

Evidently Samsung was cramming a lot of technology into their Note7 to "outflank" the iPhone 7, as Samsung's heir apparent phrased it. The Note7's integrated S-Pen takes up a lot of internal space forcing their engineers to fit more and more into a tinier space than the iPhone 7. Samsung's engineers obviously took too big a gamble as the Instrumental team pointed out. Samsung was trying to illustrate how their product was superior to the iPhone 7 and it ended up blowing up in their face literally.

This is why Samsung is doubling down on their upcoming Galaxy S8. They can't allow fear to stop them from innovating and being on the cutting edge. But as the Note7 proved, sometimes the cutting edge can throw a company off the cliff and into the abyss.

With the competition getting tougher every quarter and pushing their smartphones to do more and more, a derailment is bound to happen from time to time.

Just today we learned about Lenovo wants to get back into the top five smartphone vendors worldwide after being overtaken by Oppo this year. So their phablet is now taking their Google-Tango camera technology to the next level for Augmented Reality that they first introduced in June. Lenovo's new phablet is also sporting a whopping 6.4" display with a resolution of 1440 pixels by 2560 pixels. Their Phab 2 Pro will sell for $500 for 64 GB storage and 4GB Ram.

So the pressure is on both Samsung and Apple to take their smartphones to the next level and from what we've been reporting on over the last quarter, both companies are going to raise the bar much higher in 2017. So hold on, because it's going to be wild market ride next year and no one could afford a disaster like the Note7. So the tensions are going to be high which is going to make it a lot of fun for consumers to see these tech giants battling it out to the finish.