Home Archives Contact Us Subscribe Twitter MeWe Facebook Patently Mobile
It's not a Sure Bet that Apple's Next iPhone will have a Curved Display as Rumored
Apple's Chinese Competitors Huawei, Oppo and BBK forming an OLED Alliance to Ensure Sufficient OLED Display Supply 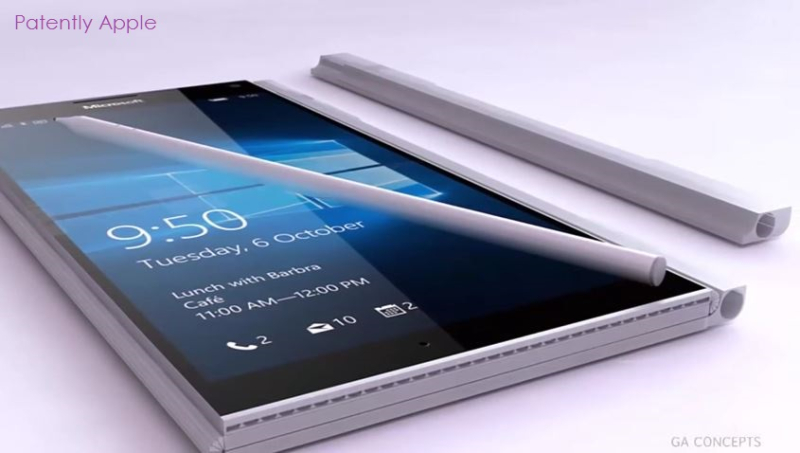 Last week Patently Apple posted a report that covered the Australian Financial Review's interview with Microsoft's CEO Satya Nadella. I noted in the report that when the interview touched on future devices, Nadella noted that the company would not rush back into the smartphone market to try to compete with Apple and Samsung despite rave reviews for recent devices. Yet I further noted that Nadella' choice of words "certainly didn't slam the door on a future smartphone and in fact hinted that they'd be back once they had something the company could really get behind; something that could deliver a solution or give customers an advantage." It would appear that Microsoft, once writing off their Nokia loses, is now ready to re-enter the smartphone market with a focused new smartphone with no link to the past, no link to their Lumia line-up; a smartphone clearly in sync with their entire Surface lineup of devices.

According to a new Chinese-language Commercial Times report, Apple iPhone supplier Pegatron is now working with Microsoft to produce Surface devices and is now ready to begin trial production of Surface Phone.

Optimizing brisk sales of Surface tablet products, Microsoft is expected to announce the Surface Phone in 2017, said the paper.

The Commercial Times report really hangs on their one leak about the Pegatron trial and a lot of speculation that they read into the Australian Financial Review's interview with Nadella. At present or until meatier evidence surfaces about a Microsoft Surface smartphone, I'd be a little skeptical for a Surface phone to debut in early 2017. Tradition thus far points to November 2017 at the very earliest for such a new device. Then again, they may want to avoid launching a new smartphone anytime near the debut of Apple's next-gen iPhone. So for smartphones, the timing of a new Surface phone may break with tradition.

One of the more interesting rumors making the rounds about a future Surface phone is that Microsoft is likely to use an Intel processor to re-create a Wintel force that traditional Wintel OEM's can get behind for solutions from PCs through to smartphones on a single architecture. Intel has been unable to crack the smartphone market and working with Microsoft again could be the way to re-enter the market in force.

At the end of the day it looks like it could be a very crowded market for smartphones in the U.S. in 2017 with Huawei and Xiaomi coming on board. This is going to complicate Microsoft's possible entry into an already crowded market unless they could secure distribution with most of the top U.S. wireless carriers. One of the angles that could give them a slight edge in the market is if they come up with a Samsung Note7 alternative as shown in our cover concept graphic. That could be their ticket into the smartphone game and another way to get ahead of Apple.