Today Donald Trump reportedly told the New York Times that Apple's CEO Tim Cook called to congratulate him on his stunning election victory. The news comes on the heel of our report titled "Apple Reportedly Preparing a Responsible U.S. iPhone Plant Back-Up Business Plan." In that report we revealed that Apple had asked Foxconn in June to look into making iPhones in the U.S," well ahead of the election result. Apple's CEO, unlike many technology company cry babies like Zynga co-founder Mark Pincus who tweeted after the election, "Is this what it felt like when people first realized Hitler could actually take power?" – was prepared to reach out to Trump and open the door to dialog. That's not a guarantee that the two will agree on everything, but at least it shows that Apple's CEO understands that business is business and that trying to work with President Elect Trump where they can is better than sending out a war cry. 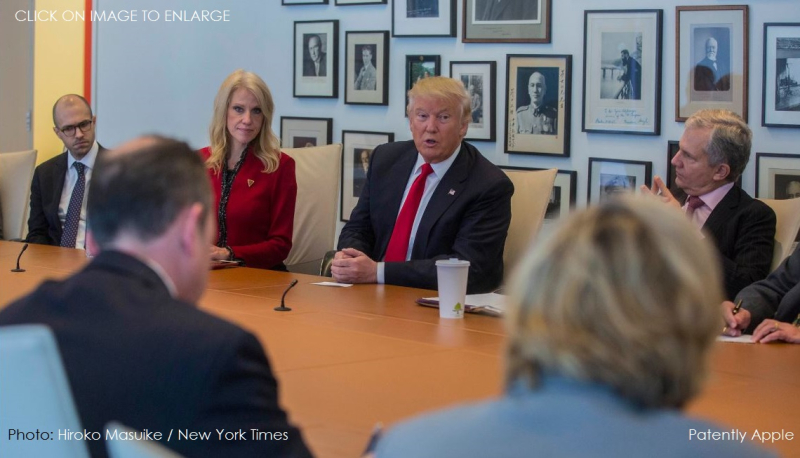 Today the New York Times released a full transcript of their meeting with Trump. Very little about Tim Cook was actually presented. The main text regarding Apple was as follows:

"I was honored yesterday, I got a call from Bill Gates, great call, we had a great conversation, I got a call from Tim Cook at Apple, and I said, ‘Tim, you know one of the things that will be a real achievement for me is when I get Apple to build a big plant in the United States, or many big plants in the United States, where instead of going to China, and going to Vietnam, and going to the places that you go to, you’re making your product right here.’

He said, 'I understand that.' I said: 'I think we’ll create the incentives for you, and I think you’re going to do it. We’re going for a very large tax cut for corporations, which you’ll be happy about.'" Trump went on to talk a little more on tax cuts and about cutting regulations. You could find more on this here.

Any other specifics of the conversation between Trump and Cook were kept private and I doubt that Apple's CEO will reveal any additional details at this time.