Home Archives Contact Us Subscribe Twitter MeWe Facebook Patently Mobile
Microsoft, Apple and Google Aim to Extend Touch Technologies to a World of new Devices and Applications
Samsung Aggressively Gets into Apple's Face with Moves into AI and Telematics with Harman Acquisition 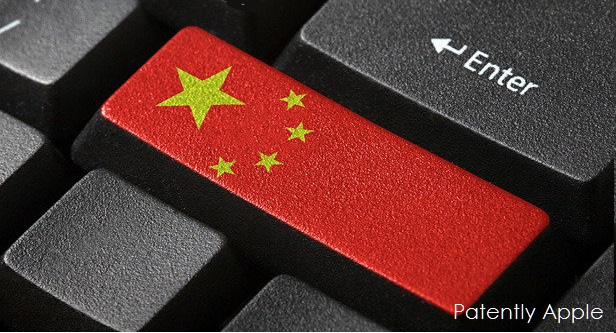 Last week Patently Apple posted a report titled "Chinese Cyber Security Law goes into Effect in June 2017 that may Require Apple to surrender iOS Source Code." The report noted that "China has green-lit a sweeping and controversial law that may grant Beijing unprecedented access to foreign companies' technology and hamstring their operations in the world's second-largest economy." So unilaterally China appears to be threatening U.S. tech companies by such new legislation. With President Elect Trump wanting to push back against China's monetary manipulation and unfair trade practices, a Chinese state publication sent a message out to President-Elect Trump that they have the cards to hurt the U.S. in any trade war.

The fear mongering rhetoric has already kicked into high gear this morning in China as a State-backed newspaper decided to do a little saber rattling of their own towards President Elect-Trump. CNBC reports that the publication has clearly stated that "Apple iPhones and other U.S. goods could suffer sales hits in China if president-elect Donald Trump goes through with his 'naïve' plan of slapping a large import tariff on Chinese products." So it appears that China will use Apple as a bargaining chip in any negotiations with Trump.

During his election campaign this year, Trump spoke of a 45 percent import tariff on all Chinese goods while failing to outline how it would work. Should any such policy come into effect, China will take a "tit-for-tat approach", according to an opinion piece in the Global Times, a newspaper backed by the Communist party.

"A batch of Boeing orders will be replaced by Airbus. U.S. auto and iPhone sales in China will suffer a setback, and U.S. soybean and maize imports will be halted. China can also limit the number of Chinese students studying in the U.S.," the Global Times article read.

But the Chinese newspaper was not convinced Trump would go through with his suggestion, calling it "merely campaign rhetoric" and questioning its legal validity. U.S. law dictates that presidents can only impose tariffs of no more than 15 percent for a maximum of 150 days on all imports,

The report further noted that "If Trump imposes a 45 percent tariff on Chinese imports, China-U.S. trade will be paralyzed," the Global Times said.

Lastly the CNBC report stated that "The opinion piece said Trump was a 'shrewd businessman' and would not be naïve, but, if he was serious with the policy, it would affect a number of U.S. industries."