This week the European Patent Office published an Apple patent filing made in Taiwan in August 2016. Technically it could be considered a continuation patent of Apple's original invention titled 'Fused Glass Device Housing,' which Patently Apple covered in August 2013 'Apple Files Patent for Fused Glass Device Housings for TV & More.' Any time the only thing that changes in a patent filing are its claims, then it falls into the category of known as a continuation patent. One of the added claims in this current filing has brought a new idea to light that may have been overlooked originally. Due to Apple highlighting this feature now in its claims, it's at least a feature that they think is worthy enough of cementing it in their patent claims which protects it better under the law. Considering that Apple's 2017 anniversary iPhone is to have a form factor emphasizing glass, this patent could play a part in the new design.

When this Apple invention first came to light, Apple seemed to place emphasis on an iMac display and/or Television even though it touched on an iPhone and iPad application. The new additions to Apple's patent claims point to a middle section of a possible future iPhone being a band of glass as opposed to the iPhone 4 or 5's band of metal.

The unique aspect to this proposed feature is that the middle band of glass would be band that could be illuminated.

In Apple's patent FIG. 4 illustrated below we're able to see an iPhone that has been provided with upper and lower glass layers # 20. The middle segment of the housing is noted as structure #38 which could be a layer of glass, ceramic or other material that could be illuminated. 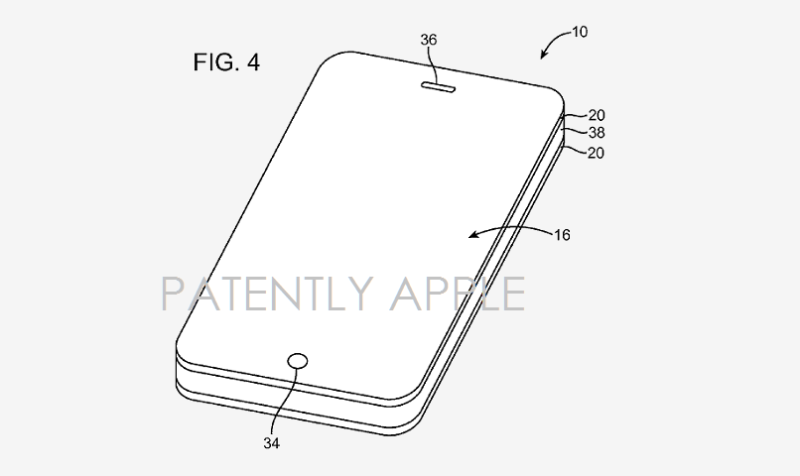 On one hand, Apple notes that the glass structures #20 may be formed from clear glass, glass with a colored tint (e.g., a blue tint, red tint, green tint, etc.), black glass, gray glass, or glass of other colors.

Apple further notes that the amount of color in the bottom glass layer may be sufficient to render structures dark in appearance to help hide interior device components from view through the edge glass. This is where the patent gets a little confusing as structure #20 is representing top and bottom glass but notes that they want to hide the iPhone's internal components when looking at the glass edge of the iPhone.

With its description being awkwardly described, 'the edge' glass appears that it could take on not just colored 'tints' but also be 'illuminated' along with the edge. At one point Apple notes that the "side view of glass structures formed by fusing a peripheral glass member to a planar glass member may be configured to be illuminated along an edge using a light source."

If this feature ever materializes then technically the iPhone would be able to notify users of things such as incoming texts, emails, important contacts and/or indicate the battery is running low by having the side glass band illuminate in corresponding colors as our cover graphic would suggest.

Other new patent claims include the following:

In the end, while the idea of an iPhone having an illuminated glass mid-section or band sounds pretty cool, we have to caution that it's just a patent filing idea that may or may not ever materialize. Though considering that the rumored 2017 iPhone involves an all-glass housing, it has to at least be considered as one of many possibilities. If it were to be implanted, then the accessory cases would have to provide clear sidings in order to see the illuminated notification colors.

Apple's patent was filed in Taiwan under number TW201628979 and surfaced at the European Patent Office the week of November 07.