Apple TKO's Android, the Goliath of the Smartphone Industry

On Tuesday Patently Apple posted a report titled "For Six Quarters Straight Apple's iPhone has taken 91% or more of the Smartphone Industry's Profits." Despite declining iPhone sales this year, Apple was still able to maintain a mesmerizing hold on smartphone industry profits throughout the year. It's a factoid that should go down in business history books to be sure. Despite Android holding the mantle of being king of volume shipments with a whopping 85% market share, it's truly a statistic only the walking dead could appreciate. There could be no pride in owning 85% market share of the smartphone industry and yet only muster 9% of its profits. It's the David and Goliath story of our times. Android is definitely the Giant that's been taken out by little Apple, quarter after quarter where it counts: Profits.

Apple's stranglehold of industry profits makes Samsung's Note7 all the more painful for Samsung. Huawei, who was ranked the number three smartphone vendor in Q3 was the number one Android vendor for profits that amounted to …. Drum roll …. 2%. Evidently that puts Samsung into a hole for the year that's so deep that it could be described as a bottomless pit.

Funnier yet is Xiaomi, the little darling of Industry tech pundits and analysts for being the Apple of China got wiped off the top five global smartphone chart last quarter and in fact fell off the list for all of 2016 altogether. They were upended in January by China's Oppo and Vivo (or BBK Communications).

Instead of being embarrassed by the news of Apple's killer smartphone profits this week, Xiaomi's VP of International marketing jumped up and down to openly confess that they proudly make no profit for their smartphones because it reflects their business model. And what business model would that happen to be? Yes of course, the Razor/Razor Blade business model where they give away the product/smartphone in the hopes of gaining profit from their branded services be it for apps, games, movies, appliances and other tech toys.

Yesterday "Xiaomi's global vice-president Hugo Barra said the company's business model was not based on money made from handset sales per se and that it did not need to raise more funds or see any point in doing so at a valuation of less than $46 billion.

"Basically we're giving [handsets] to you without making any money… we care about the recurring revenue streams over many years. We could sell 10 billion smartphones and we wouldn't make a single dime in profits."

Xiaomi, which discloses little of its profit and revenue figures, has increasingly emphasized its range of home appliances such as air and water purifiers, and rice cookers as key earnings drivers.

When there's no profit for a major device that a company is known for, it boils down to selling pure marketing spin.

Patently Apple posted a report earlier this month titled "Xiaomi's New 'Mi Mix' Premium Smartphone is out to steal the Industrial Design Spotlight away from Apple" which clearly showed that Xiaomi desperately wants in on where the profits are, the premium smartphone segment.

The company pulled out all of the stops recently to show that they're serious about smartphones that could make a profit by hiring the designer that worked on Steve Jobs yacht Philippe Stark as noted in the graphic below. 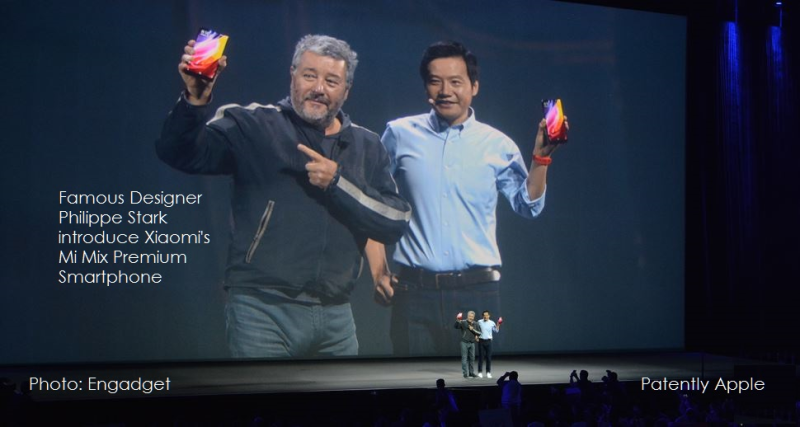 They're serious about smartphone design and making a profit because we noted in our report that Xiaomi is aiming to come to the U.S. in 2017; something that Reuters confirmed in their report as well. In fact Reuters specifically noted that "In January, Xiaomi will also make its debut at the Consumer Electronics Show in Las Vegas, launching a new product during the event."

Engadget's November byline for their story on the new Xiaomi smartphone was "Xiaomi aims to be more than king of the budget smartphones." Yes, they want to make a buck for once – even if Barra wants to pretend that it's their business mission to lose money to make money. Like I said, it's what losers tell analysts to appear as if losing money is part of the bigger plan. Ha! – right, sure, whatever you say Barra.

In the end the reality that the entire Google smartphone ecosystem for Android is for losers was made clear this week and for the last year and beyond for that matter. All the whining of Wall Street and their snobbish consternation that Apple and the iPhone are on their last legs blew up in their face just like it blew up in the media's face when Donald J. Trump won the election to their oh-so great surprise.

In the end, Apple makes money on the razor, the razor blades and beyond. Real winners make money by honestly making great products that people are willing to pay for and line-up at stores to get their hands on the minute that they're out. And this week we learned the smartphone industry had a single winner left standing for Q3 2016: Apple. The entire Android army of smartphone OEMs fell like dominoes with a single fact that rang out around the world this week: Apple earned 91% of the smartphone industry's profits.Ouch!

I thought that the tech story of the year would have been Samsung's never ending problems with their Note7's exploding. But now I'm thinking that the story of the year is really about how Apple's smartphone profits exploded in Google's face. Both are equally entertaining, but the latter packs a punch that makes it a more memorable TKO.