The Google Manifesto: The Arrival of the AI Revolution 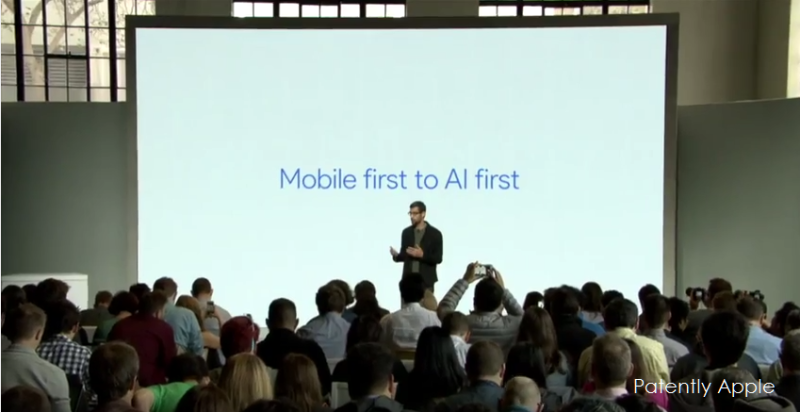 Yesterday Patently Apple posted a report titled "Google Introduces Pixel the Smartphone and other Hardware Devices Squarely Aimed at Amazon and Samsung." The report was a simple peek at Google's newly released hardware products covering their all-new new Pixel smartphone, Google Home, Google Wifi and more. Closing out that report I touched on Artificial Intelligence because a Gartner analyst speaking to the Guardian about the Google event was saying that Apple was late to market with AI and that Apple was quickly dropping behind Amazon and Google. It was the same false argument made by a Forbes contributor months ago. This is the narrative that Google is engineering when talking to journalists. It's the propaganda that they want consumers to hear about to put Apple in the rear view mirror of the AI revolution. Remember that Apple and Steve Jobs was at the forefront of the personal computing revolution and that they were also at the forefront of the mobille revolution with the iPhone and iPad. So hell if Google wants Apple to lead the next revolution regarding AI. So yesterday Google took off the gloves and simply decided to take up the AI mantle.

In yesterday's report I tried to be diplomatic in wishing Google all the best in their venture, especially if they could challenge Samsung's product line. But Business Insider's writer Mat Rosoff didn't hold back in slamming Google's big splash last night by saying that Google is a follower not a leader and hit them on every front imaginable.

But just don't say that to Google's CEO Sundar Pichai's face because he sees things much differently. In fact, forget yesterday's new product launches. If you focus on that you missed the boat entirely. Yesterday's event was really about delivering Google's manifesto. The AI revolution is the next wave or the next phase in computing and Google was at the forefront. They were leading it and that was the end of that discussion.

When Steve Jobs introduced the iPhone in 2007, it truly was a moment in time that marked the beginning of the true mobile revolution with true smartphones, modern apps and the internet in your pocket.

Yesterday, Google's CEO tried to seize that moment in time for Google. A moment in time where they were bringing the next revolution to the public: The AI Revolution.

Whether we'll look back and see that moment of the event in that light only time will tell. But make no mistake about it – Google's CEO was basically making that claim. He believed this was Google's shining moment, because to date, no one, not even Apple was ready to make such a claim.

To mark this moment. Patently Apple has transcribed about 90% of Pichai's keynote so that it's on record and quotable for future reports. This is what Pichai stated:

"We're at a seminal moment in computing. If you step back and think about it, computing has always had big shifts every ten years or so. It all started in the eighties when the personal computer reached the mainstream. It was the first time that computing touched the lives of many people and revolutionized the way they worked.

Roughly a decade later, in the mid-nineties, the Web arrived. It is arguably the biggest platform shift that we've seen in our lifetime. It brought the internet to many more people, radically changing the streets (?), fundamentally changed the way people interact and connect with each other.

About ten years later, in the mid-2000's, with the advent of smartphones, we had the mobile revolution. That brought computing to about half the world's population – and it's profoundly changing people's lives; and the shift continues.

In fact, when I look ahead at where computing is headed, it's clear to me that we're heading, evolving from a mobile-first to an AI-first world.

What do I mean by that? In this world computing will be universally available, it will be everywhere in the context of a user's daily life. People will be able to interact with it naturally and seamlessly than ever before. And above all else, it will be intelligent. It will help users in more meaningful ways.

At Google, we're very, very excited about this shift and we've been working for a long time towards this shift. At the heart of these efforts, is our goal to build a Google Assistant.

We've spoken about Google Assistant earlier at Google I/O this year. The vision to our Assistant as a two-way conversation, a natural dialogue between our users and Google to help them get things done in the real world. The Assistant will be universal, it'll be available when the user's need it to help them. And our goal is to build a personal Google for each and every user. Just like we built a Google for everyone, we want to build each user his or her own individual Google. To capture our vision for what the Google Assistant is, we put together a short video [noted below], let's take a look."

So as you can see that's an early vision of how we want to build a Google Assistant. We're just getting started but in many ways we been working hard to solve this problem ever since Google was founded 18 years ago. We've invested in deep layers of computer science. Today, our knowledge graph has over 70 billion facts about people, places and things [a tag which was firsts used by Apple/IBM regarding Taligent's "People, Places and Things], and we can answer questions based on that. 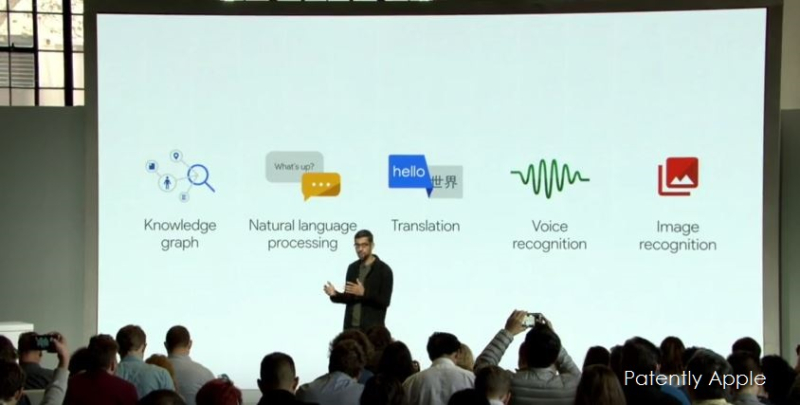 Our natural language processing is what helps us make Google truly conversational with our users and we've built state of the art machine translation, image recognition and voice recognition systems and each of these areas is being turbo charged by the progress that we're seeing with machine learning in AI.

A few months ago we captured the World's attention when DeepMinds AlphaGo won the world's 'Go' championship against [South Korea's] Lee Sedol, one of the finest players of our generation. It showed the external world that the moment for AI had arrived. But for us, the progress has been continuous and the strides are huge. In fact, in the three months since AlphGo played that game, we've had meaningful launches and how machine learning is impacting the products we build.

Let me talk about three examples, all of which we've talked about in the past three months since the AlphaGo moment. First, 'Image Captioning." Image Captioning is how computers try to make sense of images they look at. And we first launched our machine learning system in 2014, a state of the art sytem, and our quality was around over 89%. Our newer machine learning systems now the quality is now close to 94%. Four percent may not sound like much to you but first it's really hard to increase quality at these levels because we're trying to approach human level accuracy. 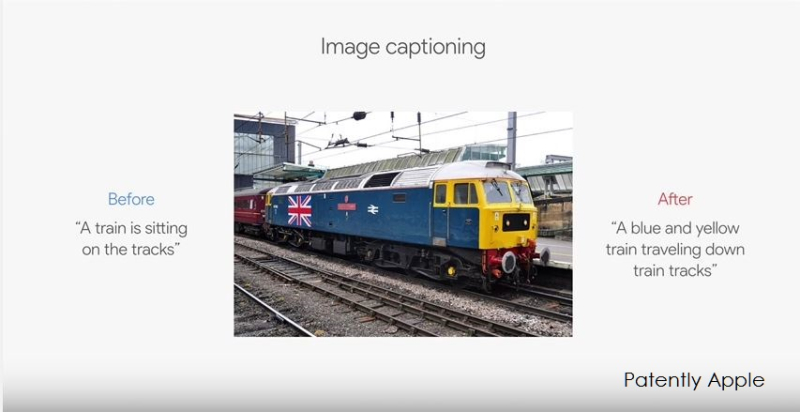 And Second, every single percentage point translates into meaningful difference for our users. So for example if you take a look at the picture behind me [see above] – about two years ago we use to understand this picture as 'a train is sitting on the tracks." Now, we understand the colors so we describe it as 'A blue and yellow train traveling down train tracks.'

Or if you look at this picture [below], two years ago we use to understood this picture as 'A brown bear is swimming in the water.' Now, we can count, the computing system can count, so we understand this as 'Two brown bears sitting on the top of rocks.' 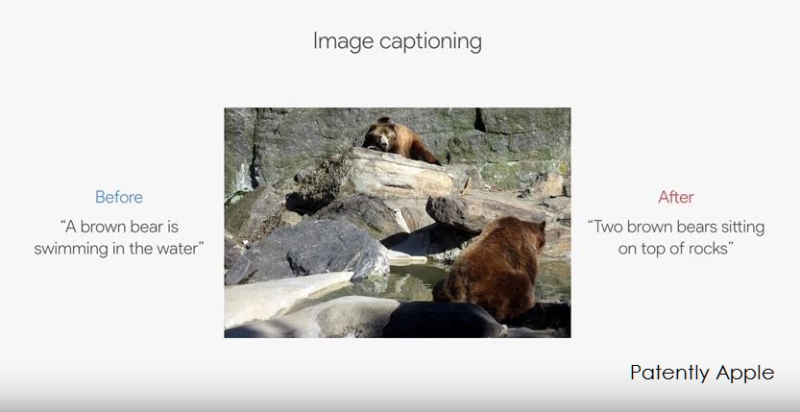 Advances like this is what helps us when you're in Google Photos find the exact pictures that you're looking for and be a better Assistant for you. 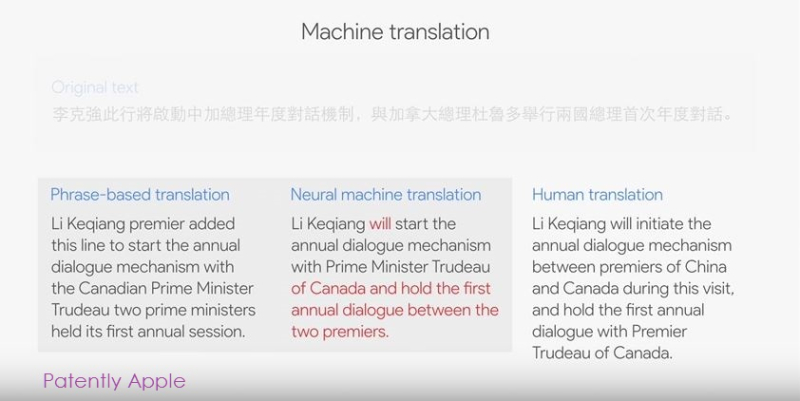 Rather than working at a phrase level, they take entire sentences and models sentence outputs; and that's what you see in the middle. And you can see it is approaching human level translation. You can look at this qauntitatively, and if you look at our previous phrase based system, it was quite far from the human system and we've closed a significant gap with our new machine learning systems. 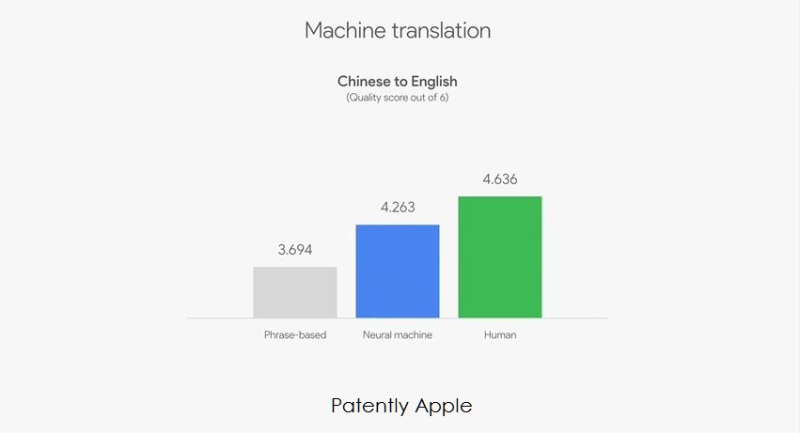 Google's CEO Sundar Pichai painstakingly drilled down into details about the progress or their AI and went on to talk about Text-to-Speech and how over time their AI will be able to understand various dialects within a country and to understand emotion and reflect that in translations and conversations with the Google Assistant in any language around the world.

Pichai then handed over the keynote to those presenting Google's new Pixel smartphone and Google Home which have Google Assistant at the heart of these products.

A Steve Jobs Moment in Time it was Not

In truth, the AI revolution really hasn't hit the market with any degree of success as of yet. Thus far it's all been super-hype in a bottle with gimmicks as thick and corny as Brylcreem ads of yesteryear. In fact, there isn't a single runaway product that we can point to today that has delivered on this promise that counts or has sparked the imagination of the public to rush out and buy it.

When Apple's late CEO Steve Jobs first introduced the iPad, it quickly racked up sales of over 100 million units. It was the fastest selling product in history. Has Amazon's Echo hit anything close to that yet? Of course not. Will the new 'Google Home' device hit that 100 million mark by this time next year? Don't' be ridiculous. Both will probably have the success that Apple did with their first Apple TV – Something that Apple simply called a hobby product.

At the end of the day, Google's CEO gave it his best shot – but a Steve Jobs moment in time it was not – even though he gave it his best shot. Apple has been working on a new Siri home product for years and there are patent filings proving that out. So it's not just Apple-speak, marketing voodoo or a fanboy's wishful thinking. So Apple has a lot of time to get on board with a new home product with Siri for every room. For now, Apple has just introduced their intelligent assistant Siri for macOS and already have it running soundly on the iPhone, iPad and Apple Watch. Where's Google Assistant? Right, it's just starting to roll out.

True, the AI revolution is coming. But sorry Pichai, as dramatic as you tried to make it, it didn't arrive yesterday during your keynote.