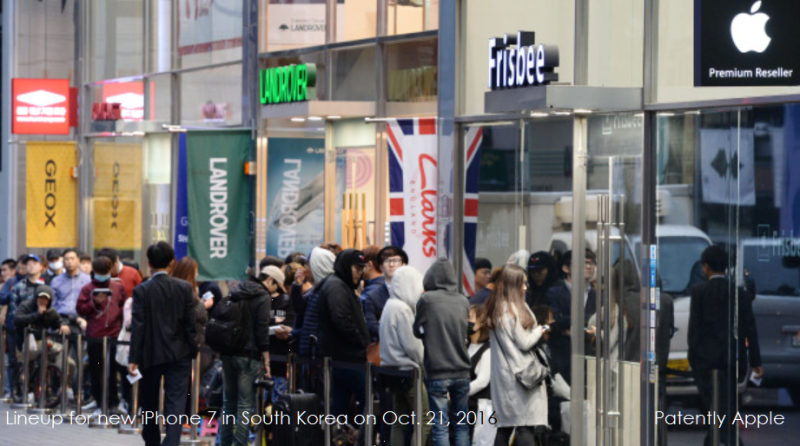 On Friday Patently Apple reported that Apple fans in South Korea enthusiastically Lined up to get their hands on the new 'Non Exploding' iPhone 7. So how did that translate into sales? According to a new South Korean report today, Friday alone rang in sales of more than 100,000 units of the iPhone 7 and the iPhone 7 Plus combined with more than 300,000 units of iPhone 7 that were also pre-ordered. Selling well over 400,000 iPhone 7s in its first week is nothing shy of stunning.

Lee Byung-tae, a professor at Korea Advanced Institute of Science and Technology's College of Business noted for the report that it is difficult to estimate how many Note7 owners have opted for the iPhone 7. But those that have switched are probably lost to Samsung once someone has switched away from Android.

Apple's CEO Tim Cook noted during Apple's financial conference call that "Overall, we added millions of first time smartphone buyers in the June quarter and switchers accounted for the highest percentage of quarterly iPhone sales we've ever measured. In absolute terms, our year-to-date iPhone sales to switchers are the greatest than we've ever seen in any nine month period and our active installed base of iPhones is up strong double digits year over year." So there's no doubt that this trend will continue, especially because of the Samsung Note7 crisis.

Patently Apple reported on Saturday that Samsung had decided to offer their Note7 customers returning their recalled smartphones with a new Galaxy S8 when they debut in early 2017. The new S8 will offer many of the same features like an iris scanner and may continue to offer liquid cooling to ensure there are no fire outbreaks.

The timing of that announcement was at the exact time that the iPhone 7 was selling extremely well in its opening weekend in South Korea. It just goes to show you the level of fear that Samsung's executives are having over the rate of switchers to Apple's iPhone.