Samsung Caves: Production of the Note 7 has been Permanently Discontinued

On August 31, 2016 Patently Apple posted our first report about the Note 7 problems surfacing in a report titled "New Samsung Note 7 Explodes During Charging." In total Patently Apple covered the Samsung Note 7 crisis in over twenty reports since that time. Today Samsung made it official in a brief sentence sent to the BBC: "Samsung permanently discontinues the production of the Galaxy Note7," as noted in our cover graphic. As the BBC phrased it, the note was "Short and not so sweet."

A second source confirming this is the Korea Herald who reports today that "Samsung Electronics on Tuesday said it would officially discontinue the sale and the production of Galaxy Note 7, hours after it halted all sales and replacements of the smartphones amid successive reports of overheating.

In a regulatory filing posted on 6 p.m., the tech giant said it has made a final decision to put the sales as well as the production of the smartphone to an end to ensure consumer safety.

Samsung is expected to suffer a significant blow from ditching its flagship phablet. Analysts offered bleak prospects for the firm's third-quarter earnings, stressing that the recent events could leave a big impact, such as damage to the Galaxy's brand value."

The Korea Times reports today that "Samsung Electronics said Tuesday that it will stop production, sales and replacements of its Galaxy Note 7 handsets, permanently ending production of the device amid persistent safety concerns over reported battery fires

Samsung said it will give a refund for the Note 7 devices until Dec. 31 on the Korean market. Those who exchange the smartphone with different Samsung models will receive a mobile gift certificate worth 30,000 won ($26.73).

"We decided to halt sales and production of the Note 7 devices over safety concerns regarding our customers," the company said in a regulatory filing.

The company and mobile carriers here and abroad will officially halt sales and distribution of replacement Note 7 devices. Samsung and regulatory bodies ― including the U.S. Consumer Product Safety Commission (CPSC) ― are investigating the exact reasons for the fires.

Samsung said it will give a refund for the Note 7 devices until Dec. 31 on the Korean market. Those who exchange the smartphone with different Samsung models will receive a mobile gift certificate worth 30,000 won ($26.73).

"Samsung Electronics is still conducting an in-depth investigation into a series of reports that replacement Note 7 devices are also catching fire, but we made the decision due to concerns over customer safety," the company said in a statement. "Consumers with either an original or replacement Galaxy Note 7 device should power down and stop using the device.

The announcement came a day after the company temporarily suspended Note 7 production at its manufacturing facility in Vietnam that is responsible for its global shipments.

In a secondary Korea Herald report posted today they noted that "Korea's three network carriers SK Telecom, KT and LG Uplus on Tuesday said that they have "stopped the sales of the Note 7, with plans to swiftly announce the subsequent procedures for full refunds or exchanges to different models.'

The refund and exchange procedures are expected to involve many complications as well, due to the sheer scale of the affected devices and the diverse domestic sales channels involved.

Considering that Samsung is the most-favored smartphone model among Koreans — Samsung accounts for around 70 percent of the Korean smartphone market — local carriers are likely to see a major plunge in sales in the latter half of this year and beyond.

'We had already experienced more than a 30 percent on-year drop in sales in August and September of this year largely due to the Note 7 recall. But it looks like it won't get any better,' one owner of a local cell phone retailer in southern Seoul told The Korea Herald.

While Samsung pulls its latest premium smartphone from the market and struggles to salvage its tarnished brand image, rival smartphone makers Apple and LG Electronics are expected to enjoy heightened interest from customers looking for alternatives to the Galaxy Note 7.

Meanwhile, US electronics giant Apple is slated to release the iPhone 7 and iPhone 7 Plus in Korea on Oct. 21. Prices have yet to be made public. Expectations are high that local customers would choose to purchase a new iPhone in the absence of Samsung's latest smartphone.'" 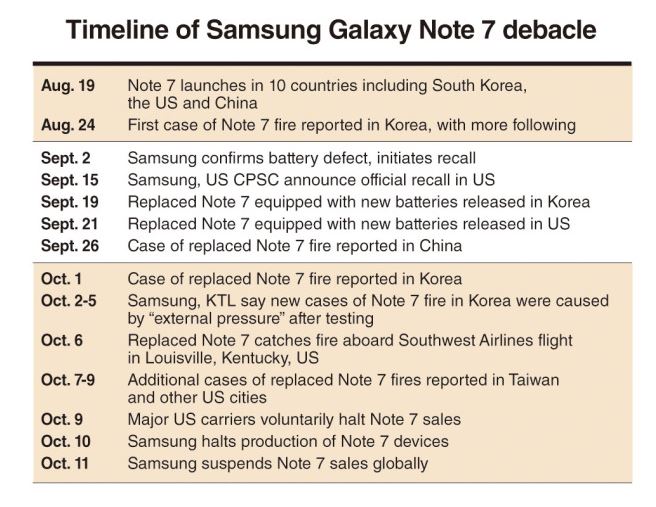 Oct 10, 2016 - Samsung's Note7 Crisis Opens Door to Major Doubts about the Company's Diagnosis of the Problem

Oct 9, 2016 - Samsung Spits in the Face of Evidence that the Note7 Replacement is a Danger

Sept 30, 2016 - Samsung's Note 7 Debacle is beginning to Spiral out of Control in China

Sept 20, 2016 - Korean Analyst Attempts to Falsely Tie the Success of the iPhone 7 to Samsung's Note 7 Crisis