Today Apple announced that Apple Watch Nike+ goes on sale this Friday. Apple Watch Nike+ combines all of the unique features of Apple Watch Series 2 with the new Nike+ Run Club app for unrivaled motivation to go for a run, guidance from the world's best coaches and athletes and coaching plans that adapt to your unique schedule and progress. Today was also the day that IDC published their smartwatch statistics for 3Q 2016 which were absolutely dismal. Yet the good news is that Apple remained the number one smartwatch vendor in the world in Q3 with 41.3% market share and the news is only going to get better going forward. With Apple heading into the all-important holiday quarter with a complete Apple Watch refresh and their all-new Nike+ model coming to market this week, Q4 should should be a huge boost to Apple's market position. 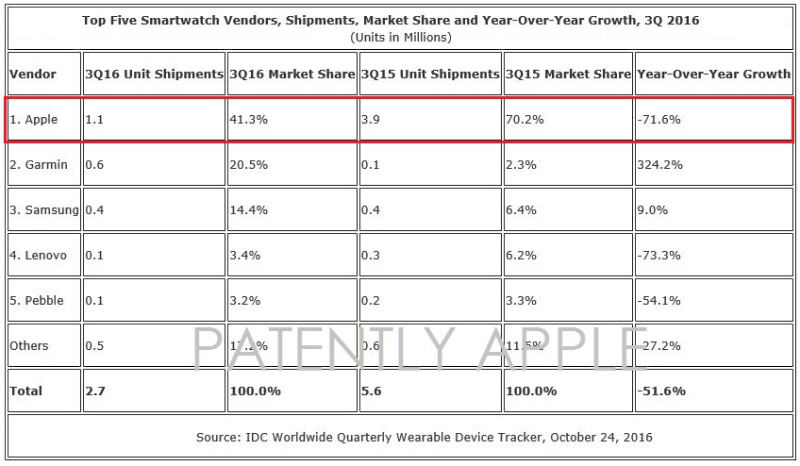 Although the decline is significant, it is worth noting that the second generation Apple Watch was only available in the last two weeks of 3Q16."

Apple Watch Series 2 only went on sale officially on September 16, 2016 and so Apple will definitely pad the large market share lead in this current quarter. With Apple Watch Nike+ launching on Friday, Apple should be on course for a record breaking calendar fourth quarter.

IDC further noted in today's report that "Google's decision to hold back Android Wear 2.0 has repercussions for its OEM partners as to whether to launch devices before or after the holidays."

Additionally, "Samsung's Gear S3, announced at IFA in September, has yet to be released. Collectively, this left vendors relying on older, aging devices to satisfy customers."

Lastly, it's worth noting that Garmin is now listed as the second largest smartwatch vendor beating out Samsung who is comfortably in third spot. Though the news is definitely another headache for them.