A year ago Patently Apple was first to report on "Apple being Granted a Patent for Biometric Sensing (Touch ID) for a Future MacBook." The patent pointed to Touch ID being on an OLED display. Then in May of this year Apple's refined idea surfaced through Apple analyst Ming Chi Kuo of KGI Securities that Apple would introduce a new added touch bar above the keyboard. Today Apple will be introducing their new MacBook and the UK Patent and Trademark Office published Apple's trademark for 'Touch Bar' as noted below. 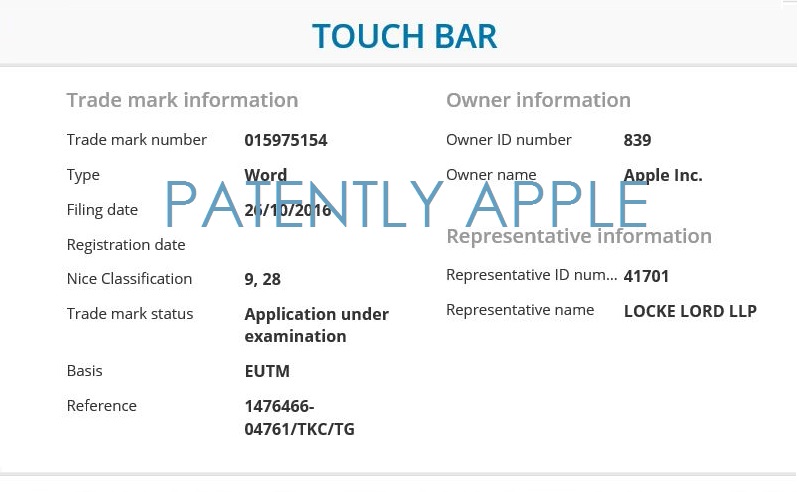 Apple filed their trademark under International Classes 9 and 28. Whatever special feature that the 'Touch Bar' will introduce today was conveniently buried somewhere in these classes and in particular class 9 threw everything under the sun at it to make it almost impossible to freeze any special feature. Does it have to do with receiving and sending phone calls as mentioned in class 9? A new Apple patent application surfaced in early September showing their renewed interest in a cellular MacBook. But is it time for such a feature?

Update 10/28/2016: After the event we see that this class was covering 'hardware/computer' and likely 'display screen' for covering the Touch Bar display.

As for Class 28, there's not much too choose from. A feature may include something related to either gaming or television. Of course it could just be icons or apps. Whatever the classes represent we'll know very shortly.

Update 10/28/2016: Apple introduced a new TV app at yesterday's event. While it's not for the Mac for now, adding class 28 would suggest that at some point in the future they'll offer it on the MacBook and why they filed this trademark under this class looking forward.