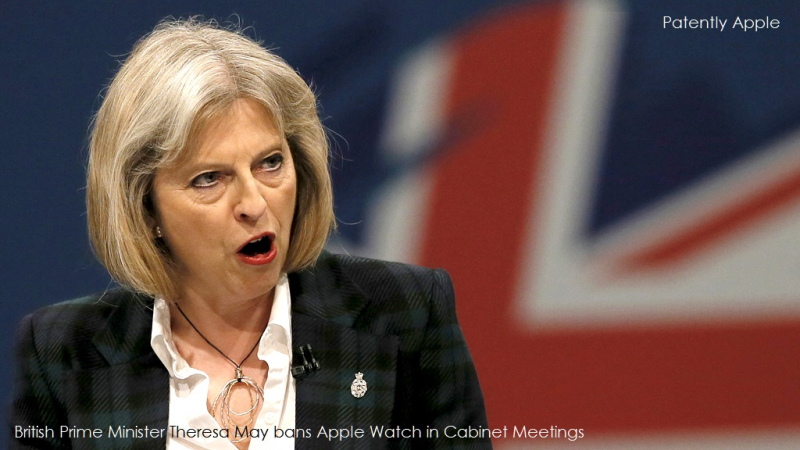 It's being reported today that British Prime Minister Theresa May has reportedly banned the Apple Watch 2 and original Apple Watch from being worn to U.K. government cabinet meetings. According to information obtained by the Telegraph, the government is concerned that the microphone in Apple's latest smartwatch could be used as a listening device by Russian hackers to spy on classified discussions of the country's cabinet. Mobile phones have already been banned from cabinet meetings over similar fears.

Since the original Apple Watch was released in early 2015, a number of U.K. cabinet members started wearing the watches under David Cameron. One noticeable early adopter was then-Justice Secretary Michael Gove. However, new Prime Minister Theresa May has reportedly completely banned Apple Watches and other smartwatches from being worn in cabinet meetings, following concerns that increasingly savvy Russian hackers could take advantage of the devices, with one source saying, "The Russians are trying to hack everything."

The report futher noted that "The move isn't all that much of a surprise, however. As aforementioned, mobile phones are already banned from cabinet meetings in the U.K., so it's only logical that the rule is extended to smartwatches, considering they contain the same basic electronics and could be just as vulnerable to hacking and spying as other devices."

Considering that that the Apple Watch doesn't have cellular connectivity and requires to be synced with an iPhone for data that is already banned from cabinet meetings, it would seem that their current logic is paranoid based.

The report adds that "There's currently a good deal of paranoia amongst western governments that Russian hackers are gaining access to sensitive information." In fact, "The U.K. government isn't alone in banning Apple Watches from cabinet meetings, though. It's also come to light that Australian Prime Minister Malcolm Turnbull has banned his cabinet from wearing the Apple Watch during meetings of the country's cabinet, following advice from a security advisor."