The U.S. Patent and Trademark Office officially published a series of 45 newly granted patents for Apple Inc. today. In this particular report we cover Apple's granted patent for radial menus. Apple was granted patents for this invention in 2012 and 2014. Today Apple was granted their third patent for this invention. The difference in this particular win, is that Apple's patent claims place emphasis on the radial menus being used in context with a stylus which could mean that Apple is considering using their radial menu invention in context with a future version of the iPad Pro and Apple Pencil.

Earlier this year, Bloomberg reported about advancing the iPad Pro in 2017. The report noted that the planned iPad update will include improvements to the Apple Pencil, a handwriting and drawing stylus aimed at professionals. Apple is considering "allowing users to annotate objects in many applications across the whole operating system, including in Mail, the Safari web browser, and iMessage, similar to what Samsung Electronics Co. offers on its Note smartphones." While it would be a great time for Apple to introduce this new radial menu feature, only time will tell if Apple thinks it's ready for prime time.

Apple's 2014 granted patent was focused on radial menus on the desktop. In today's granted patent, Apple focuses on these menus working with a stylus for a tablet. Below are a few of Apple's patent claims supporting radial menus for a graphics tablet and stylus (iPad Pro and Apple Pencil) as follows:

Patent Claim 8: The method of claim 8, wherein the activation command comprises a signal that a stylus has contacted a surface

Patent Claim 15: The non-transitory computer readable medium of claim 11, wherein the movement of the position indicator is determined by a movement of a stylus on a surface and the expected location is determined based at least partly on a pressure of the stylus on the surface.

Patent Claim 16: The non-transitory computer readable medium of claim 15, wherein the surface is a graphics tablet

Patent Claim 21; The non-transitory computer readable medium of claim 20, wherein the activation command comprises a signal that a stylus has contacted a surface.

Patent Claim 26: The computer system of claim 25, wherein the surface of the display device is a graphics tablet 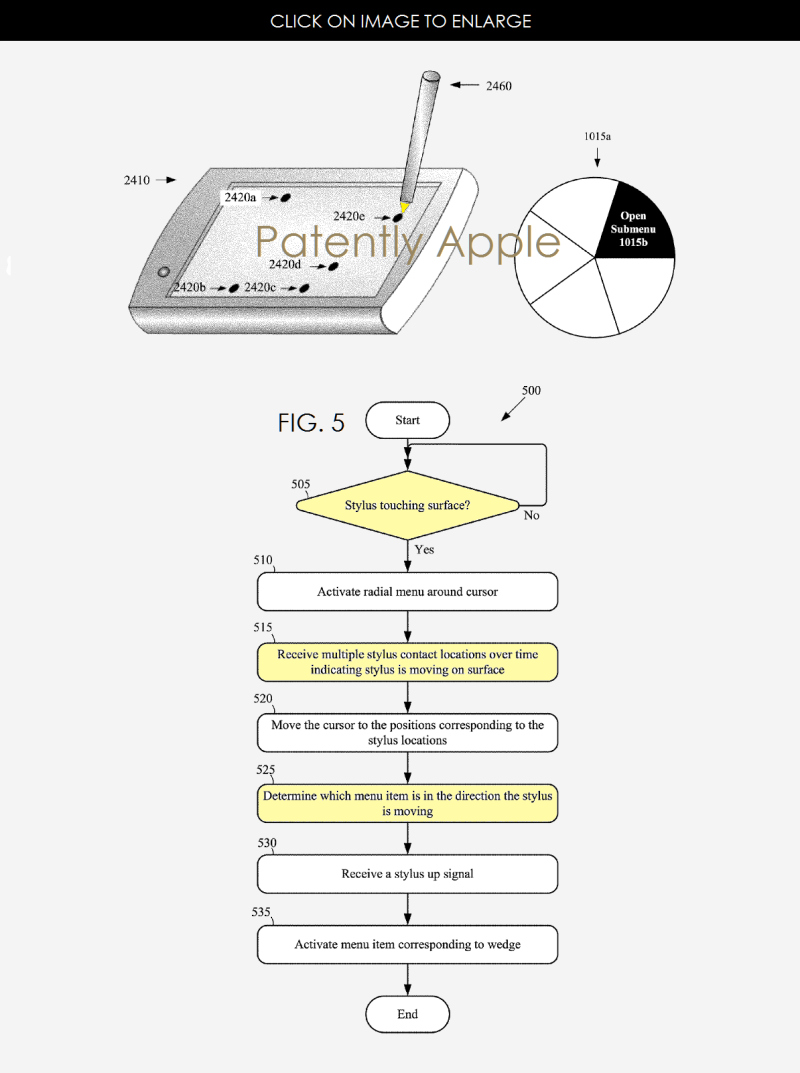 Apple's granted patent 9,459,791 was filed in Q3 2012 and published today by the US Patent and Trademark Office. See our previous reports that will provide you with a fuller overview of the invention here and here. Apple was granted an advanced in-air gesture patent last month relating to a desktop system utilizing a radial menu. In 2013 Apple was also granted another more defined radial menu patent that you could review here.

One More Thing: For the record. Samsung's Air Command feature noted below that uses a radial menu debuted in 2013. Apple's patent for such a menu dates back to 2008. So if anything, Samsung was copying a long standing Apple patent idea and not the other way around as some Androiders will try to spin this.