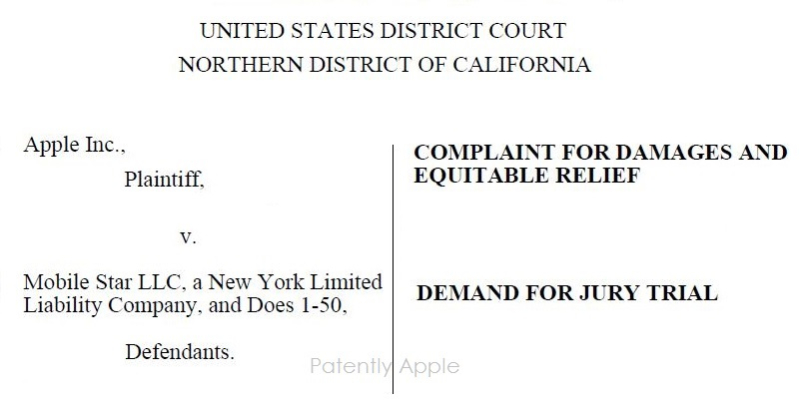 Late yesterday Apple filed a trademark infringement cases against Mobile Star LLC for selling counterfeit power products such as power adapters and charging cables through Amazon.com. Apple believes these counterfeit products could lead to fires and are therefore a risk to the public.

Apple brings this action to protect its customers from dangerous counterfeit power products such as power adapters and charging cables that Amazon.com LLC ("Amazon.com") sourced from Defendant Mobile Star LLC ("Mobile Star") and sold through its internet-based e-commerce platform located at www.amazon.com. Mobile Star also supplied Groupon, Inc./Groupon Goods, Inc. ("Groupon") with dangerous counterfeit Apple power products that Groupon then sold to consumers through Groupon's e-commerce platform. Counterfeit power products, such as those supplied by Mobile Star, pose an immediate threat to consumer safety because, unlike genuine Apple products, they are not subjected to industry-standard consumer safety testing and are poorly constructed with inferior or missing components, flawed design, and inadequate electrical insulation. These counterfeits have the potential to overheat, catch fire, and deliver a deadly electric shock to consumers while in normal use. A white paper recently published by the consumer product safety and testing organization UL (formerly Underwriters Laboratories) reported that counterfeit Apple charging products often "lack the safety features necessary to protects users from shock and fire hazards," and UL tested twelve counterfeit Apple power adapters that "were so poorly designed and constructed that they posed a risk of lethal electrocution to the user."1 The safety of Apple's customers is of paramount importance to Apple, and Apple devotes significant resources to ensuring its power products meet industry safety standards and are subjected to rigorous testing for safety and reliability. Apple brings this suit to stop Mobile Star from any further distribution of counterfeit Apple products to the public.

Apple's customers associate Apple's famous and well-known trademarks, including, among others, APPLE®, the Apple Logo [image of Apple logo] ®, IPHONE®, IPAD®, MACBOOK®, MACBOOK AIR®, MAGSAFE®, and LIGHTNING® exclusively with Apple and Apple's products and services. When consumers encounter these marks and decide to purchase goods and services identified by these marks, they expect to receive genuine Apple products that have been produced by Apple.

Apple recently purchased a number of Apple power adapters and charging and syncing cables (collectively "power products") that were directly sold by Amazon.com – not a third party seller – and determined that they were counterfeit. Amazon.com informed Apple that Mobile Star was its source for the majority of these counterfeit Apple products. Amazon.com turned over to Apple additional inventory of Apple power products that Amazon.com had purchased from Mobile Star, and Apple determined that the vast majority of these products were

In June 2016, Fortune Magazine announced that Amazon.com is the most "influential" and most "trustworthy" company amongst U.S. adults. For three years in a row, 2014-2016, Amazon.com has been ranked as the "most reputable" American company by the Reputation Institute, as reported by Forbes Magazine.

Consumers, relying on Amazon.com's reputation, have no reason to suspect the power products they purchased from Amazon.com are anything but genuine. This is particularly true where, as here, the products are sold directly "by Amazon.com" as genuine Apple products using Apple's own product marketing images. Consumers are likewise unaware that the counterfeit Apple products that Amazon.com sourced from Mobile Star have not been safety certified or properly constructed, lack adequate insulation and/or have inadequate spacing between low voltage and high voltage circuits, and pose a significant risk of overheating, fire, and electrical shock. Indeed, consumer reviews of counterfeit Apple power adapters purchased from Amazon.com and from the above ASIN report that the counterfeit products overheat, smolder, and in some cases catch fire:

Consistent with consumers' experiences with and comments about counterfeit power products, the counterfeit Apple power products that Amazon.com sourced from Mobile Star pose a danger to consumer safety. Among other things, they lack adequate insulation and/or have inadequate spacing between low voltage and high voltage circuits, creating risks of overheating, fire, and electrical shock.

Apple makes great efforts to combat the distribution and sale of counterfeit Apple products bearing its trademarks. Despite Apple's efforts, fake Apple products continue to flood Amazon.com. Each month, Apple identifies and reports many thousands of listings for counterfeit and infringing Apple products to Amazon.com under its notice and takedown procedures. Over the last nine months, Apple, as part of its ongoing brand protection efforts, has purchased well over 100 iPhone devices, Apple power products, and Lightning cables sold as genuine by sellers on Amazon.com and delivered through Amazon's "Fulfillment by Amazon" program. Apple's internal examination and testing for these products revealed almost 90% of these products are counterfeit. Apple is concerned that consumers are being deceived into purchasing counterfeit products on Amazon.com and elsewhere in the mistaken belief that they are purchasing genuine Apple products. In addition to Apple's significant safety concerns for its consumers, these products, which are consistently poorly constructed, are unlikely to function as well as genuine Apple products. As a result, consumers will erroneously come to think that Apple's products are of inferior quality and lose trust in the Apple brand, damaging the enormous goodwill associated with the Apple trademarks.

To stop the ongoing injury to Apple and its reputation and to protect consumers of Apple products, Apple brings this action against Mobile Star.

Apple Seeks the Following Remedy from the Court

WHEREFORE, Apple respectfully requests that the Court enter judgment against Defendants as follows:

That the Court issue temporary and permanent injunctive relief against Defendants, and that Defendants, their officers, agents, representatives, servants, employees, attorneys, successors, and assignees, and all others in active concert or participation with Defendants, be enjoined and restrained from:

c. using Apple's trade names, trademarks, or any version thereof, in connection with the description marketing, promotion, advertising, or sale of products or services not approved in writing by Apple;

d. assisting, aiding, or abetting any other person or business entity in engaging in or performing any of the activities referred to in subparagraphs

2. That the Court order the forfeiture and destruction of all counterfeit products bearing the Apple Marks or intended for use with genuine Apple products in Defendants' possession;

3. That the Court award Apple all damages caused by Defendants' unlawful actions;

4. That the Court award Apple treble damages as provided by law;

5. That the Court award Apple all gains, profits, and advantages derived by Defendants from their unlawful acts;

6. That the Court award Apple treble the gains, profits, and advantages derived by Defendants from their unlawful acts;

7. That the Court award Apple statutory damages of up to $150,000, for each registered copyright Defendants infringed;

8. That the Court award statutory damages of up to $2,000,000 per counterfeit mark per type of goods sold by defendants;

9. That the Court enter an award of all just and appropriate restitution;

10. That the Court enter an award of punitive damages as provided by law;

11. That the Court award Apple its attorneys' fees and all other costs associated with this action; and

12. That the Court grant Apple all other relief to which it is entitled and such other or additional relief as is just and proper.

The trademark infringement case presented in today's report was filed in the California Northern District Court, San Francisco Office. At present, no Judge has been assigned to the case.