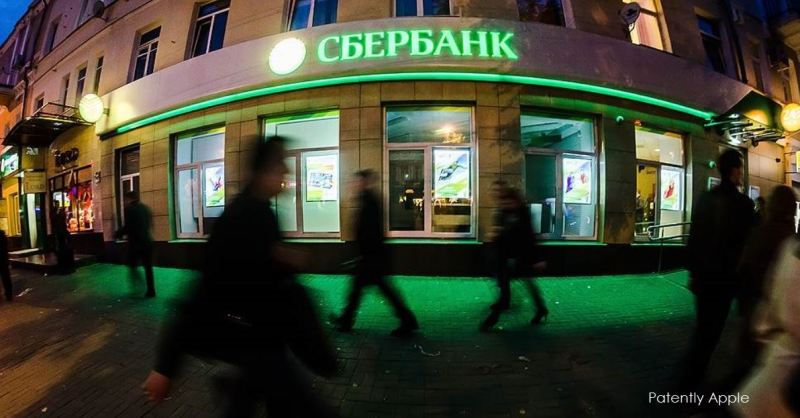 Last Friday Patently Apple reported that Taiwan's top four banks had signed on to accept Apple Pay and today it's being announced that Apple has launched Apple Pay in Russia which is the tenth country where Apple Pay is now available.

In a press release issued today by Russia's Sberbank, they stated that Sberbank clients that are MasterCard card holders can now use Apple Pay, which will let them make secure and convenient contactless and online payments.

Alexander Torbakhov, Deputy Chairman of the Executive Board of Sberbank stated that "Apple Pay is driving the popularization of contactless payments in Russia and globally. Many of Sberbank clients actively use new technologies, and an increasing number of them will prefer cash-free and contactless payment using their iPhones."

Alexey Malinovskiy, Head of MasterCard Russia, Kazakhstan, Belarus, and Armenia added that "MasterCard is a technology leader and we are committed to bringing innovations to the Russian market and by doing so, we get Russia to the digital future. With the launch of Apple Pay cardholders have a safe, easy and private way to pay for everyday purchases with their favorite devices – when, where and how they want."

The press release further noted that "Security and privacy are at the core of Apple Pay. The service leverages the safe and secure Mastercard Digital Enablement Service (MDES) platform of MasterCard, which uses the most advanced payment technologies – EMV, tokenization, cryptography and biometrics – to ensure the integrity of cardholder information.

When a client adds a MasterCard credit or debit card to Apple Pay, the card number is not stored on the device or Apple's servers. Instead, a unique ID is assigned to each device, which is encoded and safely stored on the device's Secure Element chip.

Apple Pay can be easily set up in the Sberbank Online mobile application, which is familiar to all Sberbank cardholders. Users can enjoy contactless payment service while continuing to receive all the benefits from using their credit and debit cards.

Online shopping in apps and on websites accepting Apple Pay is as simple as the touch of a finger with Touch ID, so there's no need to manually fill out lengthy account forms or repeatedly type in shipping and billing information. When paying for goods and services on the go in apps or Safari, Apple Pay works with iPhone 6 and later, iPad Pro, iPad Air 2, and iPad mini 3 and later. You can also use Apple Pay in Safari on any Mac introduced in or after 2012 running macOS Sierra and confirm the payment with iPhone 6 or later or Apple Watch.

Yesterday we noted in a report that ANZ is the only bank in Australia supporting Apple Pay that will be extending to New Zealand later this month. Additionally, Apple Pay is to launch in Japan in cooperation with Sony and their FeliCa Technology later this month if all goes well.

Apple's CEO stated in a press release on September 7 that "We are incredibly excited to bring iPhone 7 to customers in Japan so they can experience the magic of Apple Pay. Apple Pay will transform your daily routine, from making your commute easier and more convenient than ever with Suica right on your iPhone 7 and Apple Watch Series 2, to using your favorite cards to make secure and private purchases with a single touch."

It was also noted in that same press release that "Apple Pay will support many of the most popular Japanese credit and prepaid cards issued by AEON, Credit Saison, JCB, Mitsubishi UFJ Nicos, Orient Corporation, Sumitomo Mitsui Card, Toyota Finance, UC Cards and View Card, and carriers KDDI, NTT Docomo and Softbank, representing more than three-quarters of all credit card spending in Japan, with major global and domestic networks like American Express, Mastercard, JCB, iD and QUICPay. Users will continue to receive all of the rewards and beneﬁts offered by their cards.

Beginning in October, iPhone 7, iPhone 7 Plus and Apple Watch Series 2 users will be able to make purchases in stores anywhere Suica, iD or QUICPay is accepted, encompassing nearly two-thirds of all transactions at Japan's largest merchants. In addition to Apple Stores in Japan, leading retailers that will accept Apple Pay include convenience stores like 7-Eleven, Circle K, Family Mart, Lawson, Ministop and Sunkus, supermarkets such as AEON, APITA and PIAGO, gas stations including ENEOS and Esso Mobil General, retailers like BicCamera, Matsumoto Kiyoshi and Uniqlo, and favorite local brands such as JapanTaxi and Sukiya.

Online brands that will accept Apple Pay in Japan include BASE, Demae-Can, giftee, Jalan.net, JapanTaxi, minne and Toho Cinema.

Apple Pay is rapidly expanding globally on a consistent basis and today's announcement of entering the Russian market is yet another milestone.