Home Archives Contact Us Subscribe Twitter MeWe Facebook Patently Mobile
Patriots Coach can't take it anymore and Ditches his Surface Tablet saying they're too undependable
Microsoft Aims to get ahead of Apple with In-Air Gesturing for PC's, Tablets and Beyond

Apple Invention may shed some Light on next MacBook Pro Keyboard 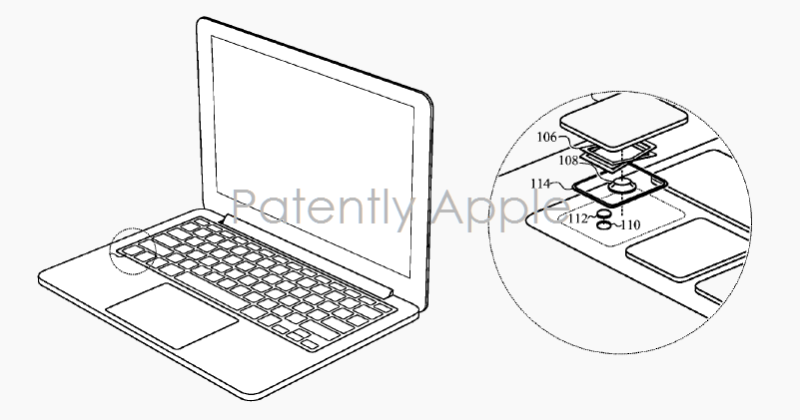 With Apple's Mac event set for next week, it was interesting to see a patent application from Apple today published by the US Patent & Trademark Office that discusses a new dimension being considered for a future MacBook keyboard that would seemingly provide users with a way to customize key sensitivity and feel. When Apple released their all-new MacBook, the one aspect of it that was universally condemned was the feel of its new keyboard from Ars Technica, Gizmodo, Cult of Mac and many others.

However, customizing the typing experience of a keyboard for a particular user requires modification of multiple components of each electromechanical actuator specifically because the electrical, tactile, and mechanical functionality of the depressible key are tightly coupled and interdependent. For example, independently increasing the rigidity of the tactile feedback structure can affect the user's perception of both press sensitivity and key stiffness. As a result, enhancing and/or refining characteristics of the user's typing experience on a keyboard conventionally involves alteration of multiple materials, multiple structures, and multiple couplings which, in turn, increases the time and cost associated with research and development, prototyping, re-tooling, and manufacturing of keys and keyboards.

Apple notes that it is often the case that the mechanical, material, electrical, and structural properties of the components a conventional electromechanical actuator of a key can inform a user's holistic perception and opinion of certain operational characteristics (e.g., flexibility, stickiness, snappiness, sponginess, stiffness, softness, sensitivity, rigidity, crispness, quality, responsiveness, durability, and so on) of an entire keyboard. However, as a result of dimensional constraints, alignment requirements, and/or various interdependencies of the electrical, tactile, and mechanical components of each electromechanical actuator, customizing the user experience of a particular keyboard typically requires modification of multiple (if not all) components of each electromechanical actuator.

With Apple invention, an electrical indication of a key press does not require mechanical closure of a physical switch, such as is the case for conventional electromechanical actuators. As a result, changes to the mechanical properties of keyboard embodiments described herein have substantially no effect on the electrical functionality thereof.

For example, in some cases, a personal computer can lower one or more thresholds upon determining that a certain key or set of keys are more likely than others to be pressed in a particular application.

Similarly, a personal computer can raise one or more thresholds upon determining that a certain key or set of keys are less likely than others to be pressed in a particular application.

In one non-limiting example, a personal computer operating a word processing application can lower thresholds for alphanumeric keys, while increasing thresholds for function keys. In this example, a user of the keyboard is less likely to accidentally press one or more function keys because the threshold for pressing said keys is increased. 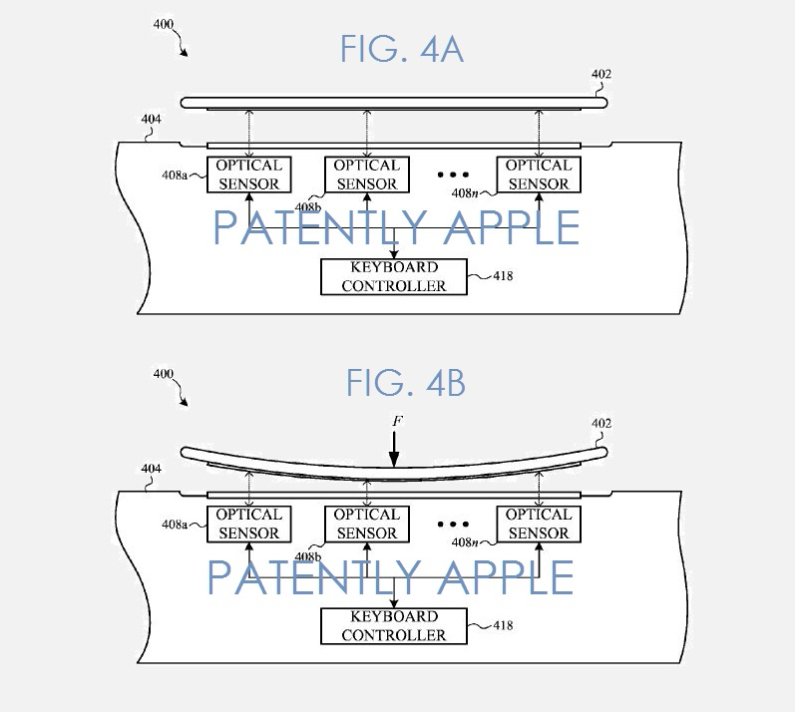 Apple's patent FIG. 4A depicts a simplified cross-section and signal flow diagram of an example implementation of a user-depressible surface (e.g., keycap, trackpad, etc.) with decoupled electrical and mechanical functionality; FIG. 4B depicts the depressible surface of FIG. 4A, showing an exaggerated deformation of the keycap that may result from a localized application of force.