With Apple's acquisition of Israeli firm PrimeSense they gained a treasure trove of patents covering all-things relating to 3D Depth Mapping for next-gen cameras, gaze and in-air gesturing to control TV and computer displays, facial recognition and so much more. Apple's iPhone-7 Plus camera is to offer a software update later this month that will deliver a new 'depth-of-field' effect known as the 'Bokeh effect.' This is likely just the tip of the iceberg as to where PrimeSense technology will be folded into future Apple devices. Today, the U.S. Patent and Trademark Office officially published a series of 45 newly granted patents for Apple and in this report we cover yet another PrimeSense invention that could apply to an advanced 3D mapped gesture based interface for a future TV or computer display.

Apple's newly granted patent covers their invention relating to user interfaces for computerized systems, and specifically to user interfaces that are based on three-dimensional sensing. Noted below in patent FIG. 10 we're able to see a user interacting and controlling content on a display directly in front of him with a hand gesture. The content types that the user would be able to interact with include games, apps, photos, videos and more. 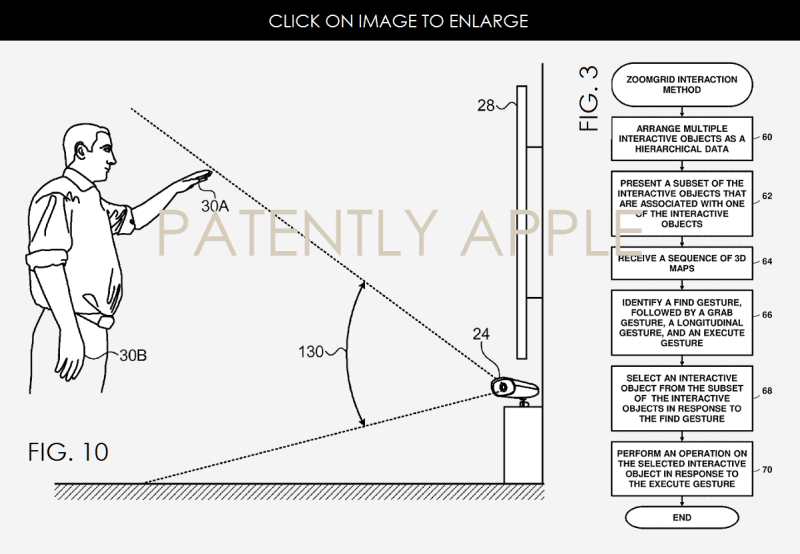 Being that we don't really know the core reasoning behind Apple's acquisition of PrimeSense, it's impossible to know what technologies Apple will actually use and which will be kept on a shelf or canned.

For instance, Microsoft used PrimeSense technology to develop Kinect. While Microsoft has other ideas for Kinect, it's yet to gain any real traction.

Microsoft was first with a PC tablet but couldn't figure out how to get consumers to buy into the idea. And yet Apple's iPad took off like a rocket because it brought a superior touch screen technology and experience to the table and a new kind of app system and so forth.

Today's patent could simply be a hangover of the Kinect technology era and Apple may drop it or figure out a way to bring it back to market in a whole new light. We just don't know.

PrimeSense technology was also behind Google's Project Tango, a 3D camera system that would introduce true Augmented Reality (AR) to a smartphone. When Apple acquired PrimeSense, it stopped Google from using PrimeSense technology and delayed that project for at least two or three years to give Apple a chance to play catch up.

Apple is likely to introduce AR for the iPhone in 2017 or 2018. Apple's CEO briefly talked about AR last Friday at the Utah Tech Tour and earlier in September with ABC news. PrimeSense technology could play a large roll in assisting Apple bring this technology to life in the not-too-distant future.

For now, if you're interested in digging deeper into today's granted patent titled "Gesture-based interface with enhanced features, check out granted patent 9,459,758 here. The patent was originally filed in May 2013.