Apple Executives Continue to Hold the Philosophy that Touch Screens Aren't Right, but Not Everyone Agrees

In an interview this week talking about the new MacBook Pro, Phil Schiller, Apple's senior vice president of worldwide marketing, and Craig Federighi, senior vice president of software engineering, said the long wait for the MacBook Pro (four years, four months and 16 days to be exact) had to do with making sure the revamp wasn't just a "speed bump" with faster chips and memory. They were after a "big, big step forward." Still, many think that was a ridiculous amount of time to deliver an update and the rest of the Mac line-up is still late.

C/Net's Dan Ackerman talking about the new 'Touch Bar' stated that "By default, the Touch Bar displays a command strip view with brightness, volume and other system control functions. When another Apple app is launched, including Photos, Mail or Safari, the command buttons roll up to the far right side of the strip, leaving the rest of the space free for app-specific commands, which can take the form of buttons, sliders or dials.

a jog wheel for rotating photos in Apple's Photos app, suggested words and corrected spellings in Mail, and a tiny display of open tabs in Safari.

The Messages app naturally gives you a menu of emojis. Other programs, including Adobe's Photoshop, will support Touch Bar, which seems especially relevant for design and creativity apps.

Future support from third-party apps and websites will make or break the Touch Bar. I'm eager to see what it can do when teamed with apps like Netflix or Spotify, which could hypothetically let you fast-forward through a movie or song with the slide of a finger.

Federighi says the Touch Bar will make it easier to find and use features often buried in rarely accessed software submenus. "Some of these apps have a lot of power that is often hidden behind menus and things, that they can surface contextually on the Touch Bar, which is so powerful."

Of course, ditching that function key row claimed another casualty: the escape key. But the good news is that at least one of the customized Touch Bar designs already had a "soft" escape key right where we still expected it." You could read Dan Ackerman's full positive report about the new MacBook Pro here.

In a second and more in-depth report, C/Net notes that "A Touch Bar instead of a full-on touchscreen means disappointment for anyone hoping for iPads and MacBooks to merge into some new mobile gadget. According to the Schiller, Federighi and Ive, 'That's just not happening. It's not because Apple can't make a touchscreen Mac. It's because Apple decided a touchscreen on a Mac wasn't particularly useful.' And on the MacBook Pro, which keeps getting thinner and lighter, it could be "a burden'" added Ive.

Ive continued by saying that "Doing something that's different is actually relatively easy and relatively fast, and that's tempting." Apple decided against touchscreens for the Mac "many, many" years ago. You can become fairly comfortable that you have a design direction that's compelling. But if you can't work out how you can refine that without compromising the final product, you can still undermine a big idea."

C/Net's report went on to say that "Even so, Apple realizes it's hard to know whether to opt for a laptop or tablet, particularly when you compare, say, the 12-inch MacBook and comparably equipped 12.9-inch iPad Pro (with a detachable keyboard and stylus). They cost about the same at nearly $1,300."

That's why the Microsoft Surface Book is beginning to gain some ground. With a few important and needed software updates to work out initial problems and a new hardware update this week, the Surface Book is very appealing to many as a notebook and tablet combination. While Windows 8 was a nightmare, Windows 10 now works well as a desktop and tablet OS. And with the Surface Book option of adding an Nvidia graphics card, many artists are being tempted to going back to a Windows notebook.

C/Net's report supported that by noting that "Apple does have to worry about losing its most ardent user base — creative types — to PCs and tablets running Microsoft's Windows software. "Apple has definitely left their customers behind in the last four years in not having updated over that period," says Brian Hall, corporate vice president of marketing for Microsoft devices. "They're just following right now."

That's just what you'd expect Microsoft to say. But some creatives told C/Net that Apple's slow pace of upgrades convinced them to abandon Macs. Dawnrunner, a San Francisco video production company, previously used MacBook Pros and Mac Pro desktops. It ditched them six years ago for Dell PCs. "We need nimble machines that are as powerful as they can be," CEO James Fox says. For Dawnrunner, "the Mac fell short for processing production-quality video, fast."

The war between Apple and Microsoft notebooks is just beginning to heat up. While the MacBook still wins against the Surface Book in tough reviews while admitting that the Surface Book offers great value, Microsoft has decided to tempt MacBook users to make the switch to Surface Book by offering huge trade-in discounts.

Microsoft said yesterday that "If you have a Mac but want to experience the ultimate laptop with on-screen touch, Surface and Microsoft Store are here for you.Starting today, anyone in the US can trade in their MacBook Pro or MacBook Air at a Microsoft Store or online for up to $650 off a Surface Book or Surface Pro."

Microsoft also launched a new switchers webpage dedicated to those wanting to make the switch from a MacBook to a Surface Book with tips for Mac users and an insurance that Surface works with iPhone and favorite apps including iTunes and iCloud.

In the end, Apple continues to go against the grain of implementing a touch display on Macs and most Apple fans have gone along with that philosophy. Over at MacDailyNews, the reactions of die-hard Apple fans could be read in their report titled "Apple does touch right and, as usual, Microsoft does it wrong." Even though fingerprint smears are all over an iPad Pro every day when using it, this oddly becomes a huge issue with Apple fans when criticizing fingerprints on a Surface Book or Surface Studio.

Over at The Verge, that is somewhat neutral on Apple, they did a survey this morning with the question: Which device does touch better – MacBook Pro or Surface Studio PC? The results as of 8 a.m. PST are clocked in and readers voted that the Surface Studio PC wins hands down. That's completely opposite to what's found in MacDailyNews report. So it really all depends on what camp you're in or listen to. 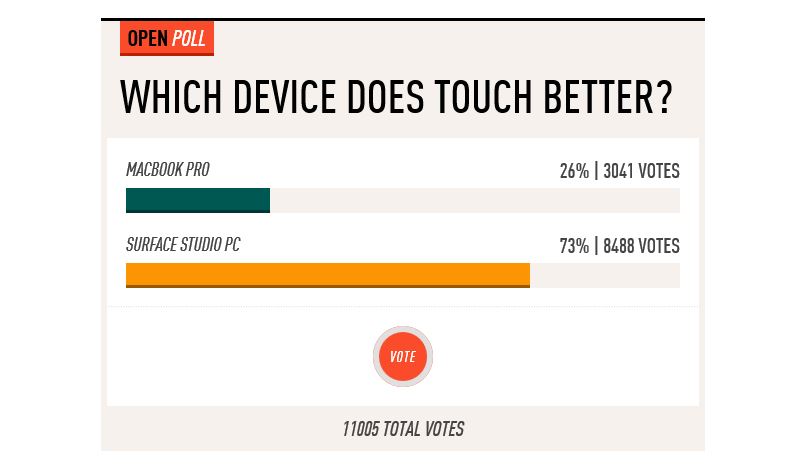 After using an iPad for years, I find myself at times reaching out to my iMac display to touch it only to laugh. I do the same on my PC that doesn't have a touch display. I don't see the crime in adding touch to a Mac's display but Apple says no so I live with it, but it doesn't necessarily "make it right." I'm not an engineer or a comic book creator or an artist who love what Microsoft's Surface Studio brings to the table. You have to see them working with it to realize, there is a niche of users where the Surface Studio will meet their needs more than a Mac. If it weren't so expensive I'd be tempted to buy one, but it's just out of my desktop budget. But it's a budget thing, not a philosophical issue.

Whereas with the MacBook Pro vs. Surface Book, it's a tougher choice. Do I buy a MacBook Pro and iPad Pro or just buy one Surface Book? At the end of the day it's like the U.S. elections. You have die-hard Democrats and die-hard Republicans. But in the end, it's the Independents that both parties have to convince in order to win the race. I know what Apple fans generally think and the same with PC fans. But for someone who has simple computer needs and is able to run macOS, iOS and Windows 10, things aren't always so black and white.

In the end, as an independent, I'll always choose what's right for me and couldn't care less what Apple's philosophy is. Apple makes business decisions that are good for them, not necessarily what's right for their customers. Independents will always go with what tools work best for them and their business. Unfortunately both sides are making it difficult to make a choice. Both sides make convincing arguments. But at the moment, I think there's a little more 'wow' out of a detachable display on a notebook than an added 'Touch Bar.' And remember, this was an Apple idea first. But understandably, the new MacBook Pro with it's Touch Bar is going to win over most Apple fans, especially those who value productivity. It's a real winner, but again, it's not for everyone.