Home Archives Contact Us Subscribe Twitter MeWe Facebook Patently Mobile
This Weekend the EU Commission & other EU Finance Ministers Met to Sharpen their Knives against Apple
Samsung Dodged a Bullet this week, but for How Long? 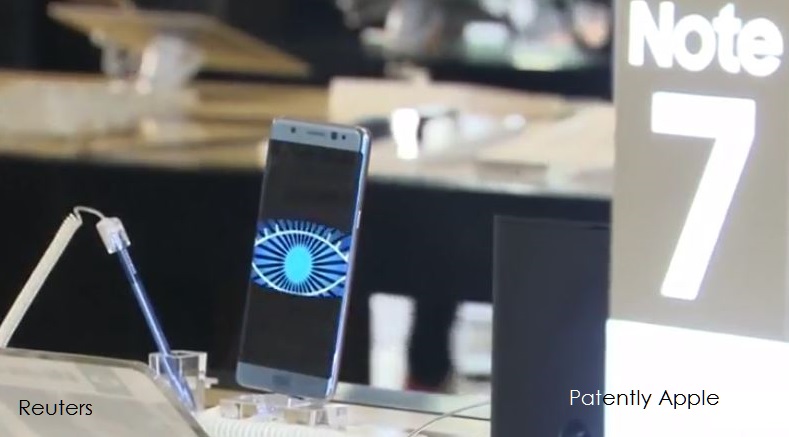 On Friday we posted a report titled "Samsung's Exploding Galaxy Note 7 Nightmare Worsens" wherein we reported that the FAA had issued a warning about the Note 7 and that a jeep owner in Australia reported that his vehicle was destroyed when charging his new Note 7. We've since learned that late on Friday the U.S. government safety agency urged all consumers to stop using Samsung Galaxy Note 7 phones, which are prone to catch fire, and top airlines globally banned their use during flights.

Following reports that the phones' batteries have combusted during charging and normal use, the U.S. Consumer Product Safety Commission said it was working on an official recall of the devices and that users should turn them off in the meantime.

"Lithium-ion batteries pack a lot of power into a small package. When these batteries overheat and burst, the results can be serious. This is why the U.S Consumer Product Safety Commission (CPSC) is urging all consumers who own a Samsung Galaxy Note7 to power them down and stop charging or using the device.

This consumer warning is based on recent reports involving lithium-ion batteries in certain Note7 devices that have resulted in fires. These incidents have occurred while charging and during normal use, which has led us to call for consumers to power down their Note 7s.

CPSC and Samsung are working cooperatively to formally announce an official recall of the devices, as soon as possible. CPSC is working quickly to determine whether a replacement Galaxy Note7 is an acceptable remedy for Samsung or their phone carriers to provide to consumers."

Reuters noted in their report yesterday that "The U.S. government action heralds more fallout for the South Korean manufacturer, which may take a financial hit from the recall and lose customers who are concerned about the quality of its flagship phones.

Some analysts say the recall could cost Samsung nearly $5 billion in revenue, after accounting for expenses from the recall process.

This is "a huge black eye for Samsung", TECHnalysis Research President Bob O'Donnell said. This was echoed by Reuters Tech Editor Jonathan Weber who stated in their video report above that "it's certainly a major black eye for Samsung. The Note 7 was a well received product, I think a lot of people were excited about it and to have this kind of recall, especially on a safety issue where you could actually get hurt by using the phone, that's a pretty bad thing for a phone vendor."

Patently Apple reported last Monday that Consumer Reports Organization called for a full and official recall of Galaxy Note 7 immediately. "A full recall under CPSC would require the return of all smartphones sold and an immediate halt of sales from all retail outlets, not just from the manufacturer."This is exactly what the U.S. Consumer Product Safety Commission is now working on at this very moment.