Today, the U.S. Patent and Trademark Office published a patent application from Apple titled "detecting stowing or unstowing of a mobile device." The invention solves two common problems or annoyances. The first is to stop the user from accidentally sending a 'butt call.' Sometimes these calls are funny, sometimes they're not. How do you know if that call from your wife or significant other isn't one being made in distress and they just can't communicate with you? The second problem solved by this invention is saving a user time turning on their iPhone after it's been pulled from a pocket and it's asleep. The invention works with a user wearing an Apple Watch. If a message or email comes in, the user gets the alert on their Apple Watch and before the user pulls their iPhone out from their purse of pocket to access the message, the Apple Watch has already communicated with the iPhone to have it turned on and have it set with the mail or message interface instantly in place without having to key in a password so that the user could get right to the message instantly and seamlessly.

Apple notes that many mobile devices can go into an inactive state when unused for a period of time, such as often happens when a user stows a device. In an inactive state, the device may, for example, power down user interface components or other components to conserve power, the device may also "lock" its user interface such that the user is required to present a credential (e.g., enter a passcode) prior to operating the device. A user who picks up a stowed mobile device typically has to operate a control (e.g., press a wake-up button) and present a credential (assuming the device is locked) in order to return the device to active state prior to interacting with it. This can make mobile devices less convenient to use. Conversely, if the user does not remember to return the mobile device to an inactive state before stowing it after use, the mobile device may be inadvertently operated, e.g., by bumping against other objects in the user's bag or pocket. This can waste battery power and/or result in unintended actions of which the user might not even be aware, such as placing phone calls or inadvertently modifying data stored on the device.

Apple's patent FIG. 1 presented below shows a wearable device/Apple Watch communicating wirelessly with a mobile device/iPhone; FIG. 9 shows a user interface screen for the Apple Watch; FIG 10 shows a user interface of the iPhone receiving and displaying the message first received by Apple Watch; FIG. 14 is a flow diagram of a process for detecting removal of an iPhone from stowage (pocket or purse) and preparing the interface to be instantly on with the waiting message first detected by the Apple Watch; FIGS. 5A and 5B show an example of a user removing a mobile device from stowage in a bag. In FIG. 5A, the user is reaching into a bag, and in FIG. 5B, the iPhone has been removed from the bag and positioned for instant use. 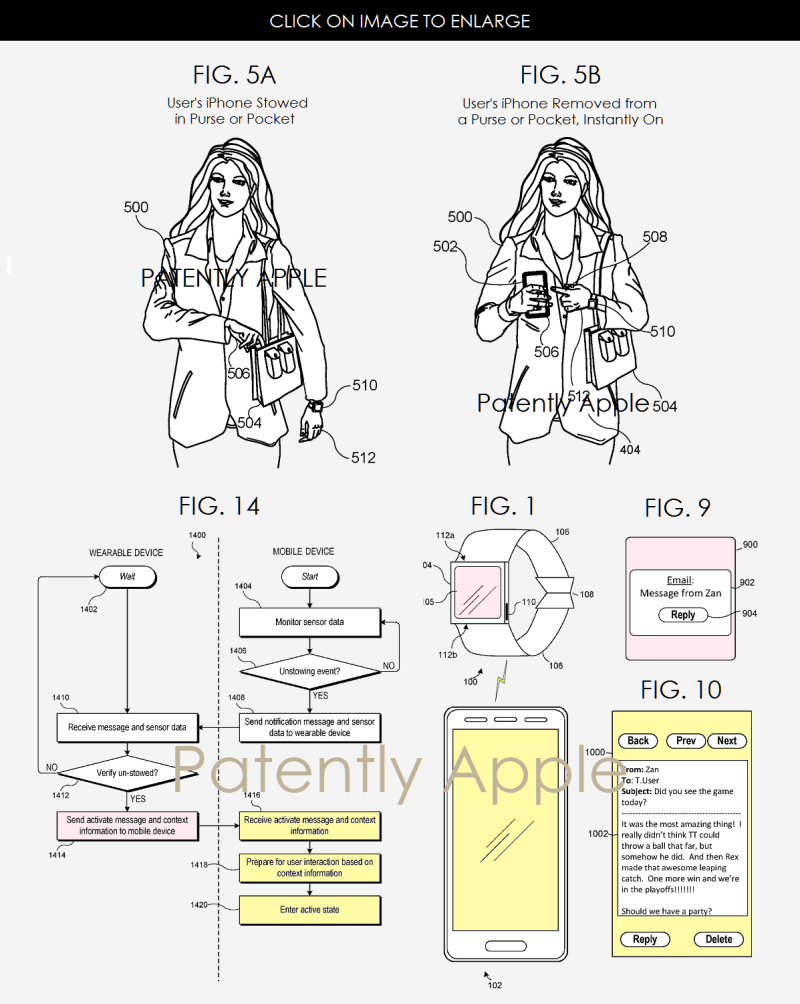 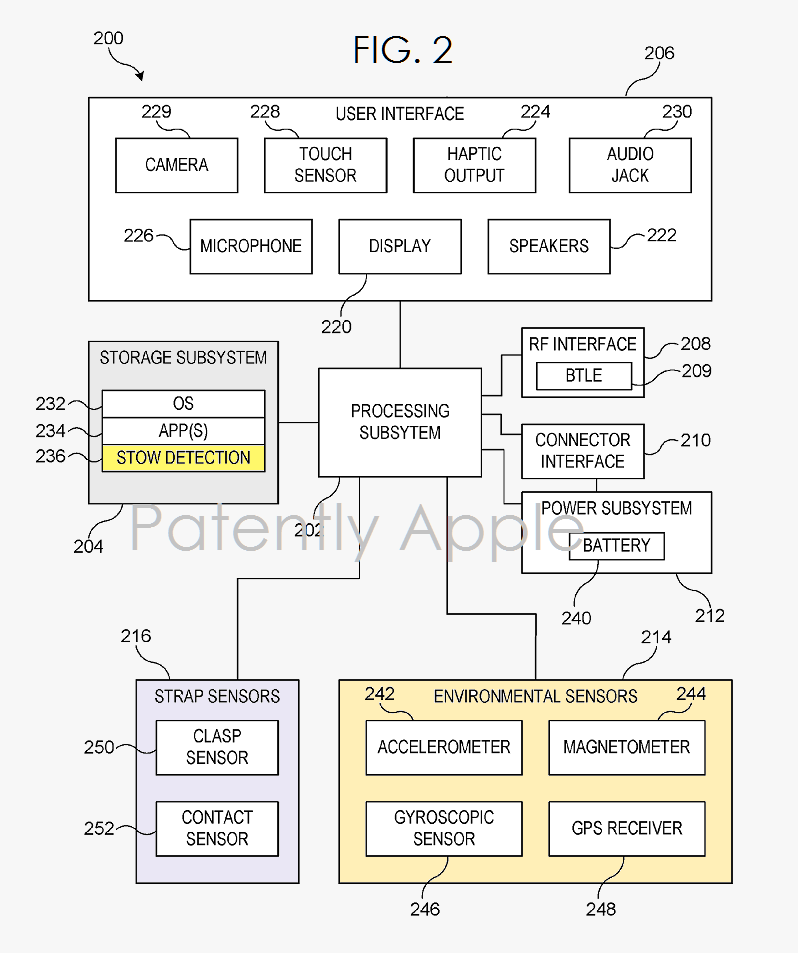 Apple's patent FIG. 2 above is an overview of a possible future Apple Watch system. Wearable device #100 (Apple Watch) can be implemented using electronic components disposed within the face portion of the watch and/or the strap #106.