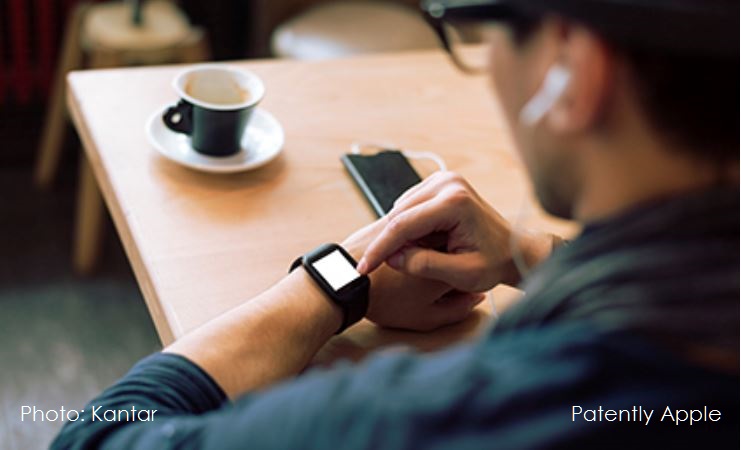 Yesterday Patently Apple posted a report titled "IDC Sees Apple Watch being the Number One Smartwatch until 2020." When taking out the cheap fitness band wearables and focusing on the more advanced smartwatches, Apple has a commanding lead that is likely to be maintained until at least 2020. Today, Kantar's Lauren Guenveur, Consumer Insight Director for Kantar Worldpanel ComTech, stated in a new published report that "In the three months ending July 2016, 47% of wearable sales in the US occurred in the smartwatch category, versus the more basic fitness bands." Guenveur added that "Apple continues to dominate this segment."

Further, the Kantar report noted that the EU4 countries (Great Britain, Germany, France and Italy) show a similar trend, with 38.6% of all wearable sales coming in the smartwatch category, with Apple leading at 31.8%.

As of July 2016, 15.2% of US consumers own either a smartwatch or fitness band, with the EU4 following behind at 8.1% penetration. Within the smartwatch category only, excluding fitness bands, adoption remains low with 4.7% ownership in the US and 3.2% in EU4. 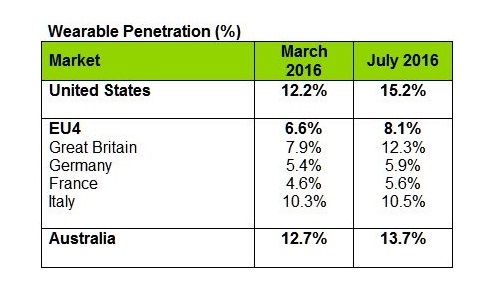 "Looking ahead," Guenveur added that "9.3% of the US-based non-owners they surveyed said they intend to purchase a wearable in the next 12 months, which came in slightly below the 11.3% figure from Great Britain. September 7th's unveiling of the Apple Watch Series 2 showed Apple addressing the key considerations cited by those planning to buy, including GPS, one of the most-desired functionalities, and waterproofing, the most-desired feature."

Outside of specific functionality and design features, cost of device is the overall concern among potential buyers. While the Apple Watch is on the high-end of wearable devices, the move to upgrade the processor in the Series 1 and drop the price point to $269 may help overcome this apprehension.

Apple remained true to the first generation design and form factor, with only variant additions this September, including the Nike+ edition and the ceramic material option. This differs from other trends in the smartwatch market and, specifically, recent launches at the IFA trade show in Berlin. There, releases like the Samsung Gear S3 and the Asus ZenWatch 3 highlighted the push towards positioning smartwatches further within the traditional watch category.

Guenveur added that "Although a minority of smartwatches are currently displacing traditional wrist timepieces, the move towards more traditional watch designs puts brands such as Fossil, Mondaine and Tag under pressure to evolve their products to include features like activity and sleep tracking, and notifications."

Interestingly Guenveur noted that 'In the three months ending July 2016, 20% of recent smartwatch buyers in the US made a purchase to replace a classic timepiece, rising to 30% in EU4." It's an interesting trend that has to be worrying traditional watch makers.

More traditional timepiece designs will help differentiate the smartwatch category from fitness-oriented counterparts, while also shifting the conversation away from the question "What can this device do that my phone can't?" That has been one of the larger barriers to purchase for non-owners, along with "functions are not useful" and "too expensive." But with this reorientation comes another set of competitors, and the number of analog watches with smart capabilities released by luxury watchmakers have only increased. As has been the case since the emergence of the category, the balancing act between style and function remains the central challenge.

Yesterday IDC noted in their report that once the smartwatch gains cellular connectivity, consumers will be able to disconnect from the smartphone, making them more useful. This is likely the single feature that could set this wearables segment on fire. At present it's unknown when Apple and others will bring this feature to market and whether such a move would hurt iPhone sales.