The 2017 anniversary iPhone has been rumored to include a glass embodiment with curved edges. Patently Apple posted a report late last month titled "The Joke of the Week: Apple is going to Copy Samsung's Edge Smartphone Design," wherein we covered some of Apple's long standing patents regarding displays with curved edges along with more radical designs to clearly illustrate that Apple would never be copying Samsung's design as the press was playing up for a week, but rather Apple fulfilling their own inventions that were published by the U.S. Patent Office before any Samsung Edge patent was on record. Of course the question that remains is how far will Apple be able to go with their anniversary iPhone form factor design? Will it be an evolutionary or revolutionary shift in design?

An iPhone with curved edges as illustrated below, is a patent figure from Apple's 2011 granted patent. This is doable 100% as Apple is using Samsung's flexible OLED displays that we know could produce this design eyes closed.

And then there are more radical Apple device form factor patents on record as those noted below. 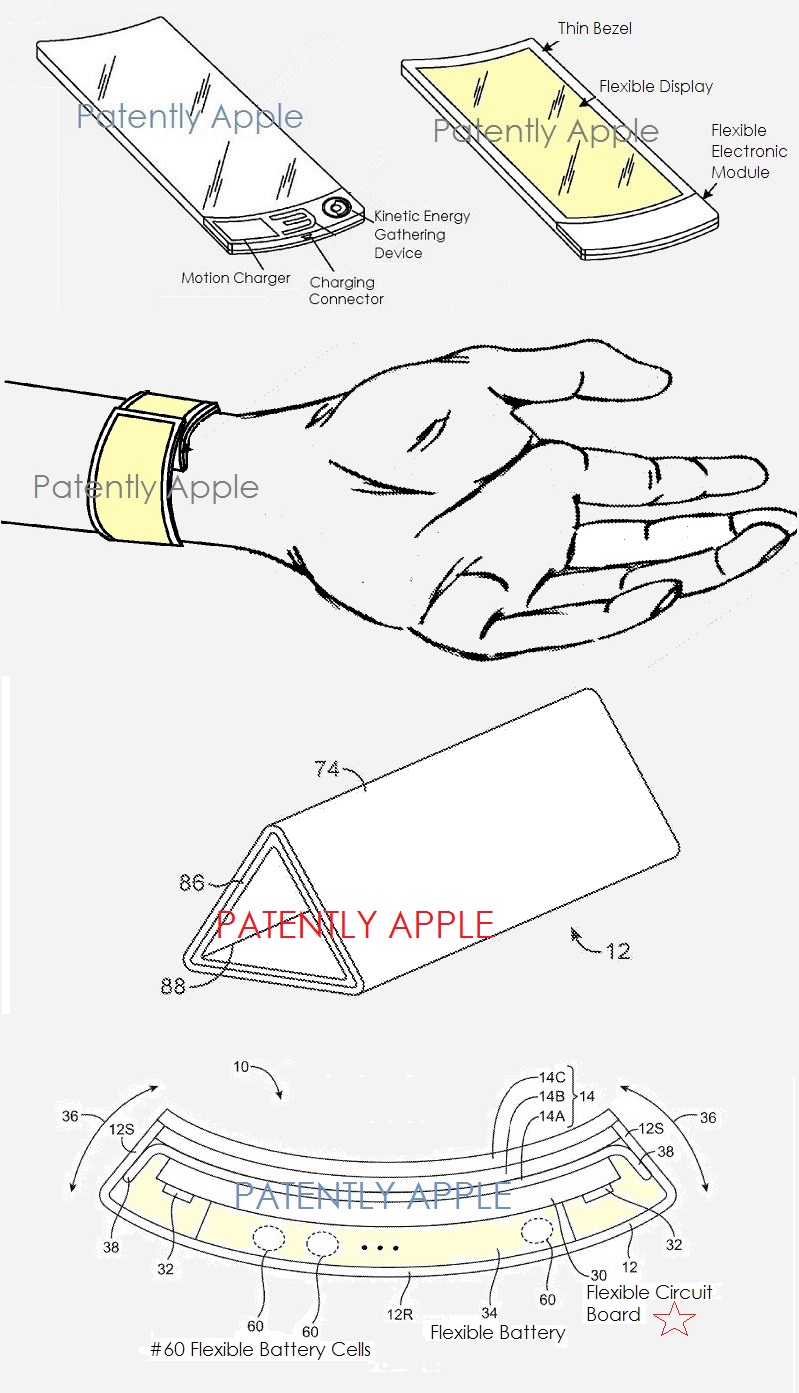 As noted in the bottom figure above, the key factor to any radical iOS device embodiment with a curved display, be it an iPhone, Apple Watch or other, will be using a flexible circuit board.

This weekend, the Wall Street Journal reports that ultrathin flexible circuit boards are around the corner and that products such as thin solar cells, computer displays using OLED and others will generate $26 billion by 2020 from 8.6 billion in 2016. . The WSJ's report begins by noting that "Silicon Valley is rethinking one of its least glamorous and most ubiquitous building blocks, the circuit board, in a bet that flexible, form-fitting alternatives could reshape electronics and spur more manufacturing in the U.S.

Researchers now are looking to replace the circuit boards on which chips are placed, using techniques they call flexible hybrid manufacturing. Techniques include wiring semiconductors together on flexible surfaces, creating products that are more versatile than existing circuit boards."

Mr. Thompson, executive director of manufacturing consortium NextFlex stated for the report that "One key development has been techniques devised by companies such as American Semiconductor Inc. and Uniqarta Inc. to make thinner silicon wafers for chip production. In some cases, the resulting chips can be rolled up like a piece of paper."

Flexible hybrid manufacturing could offer more opportunities for such work, some industry executives say, as companies devise new gadgets that must be introduced quickly and evolve rapidly.

That certainly sounds like something right up Apple's alley. Though as much as I'd love nothing more than seeing Apple be the first smartphone vendor to bring this to market behind a cool new iPhone form factor with a curved flexible display for 2017, I think I'd be going over the edge of realistic possibilities.

Yet at the end of the day, one of Apple's patent figures noted above makes it very clear that they're working on devices that require flexible circuit boards in order to deliver extreme new form factors in the future. Will these radical form factors begin rolling out some time after 2020 or as early as 2017?

Either way, Apple is working on it and the technology behind next-gen flexible circuit boards is well underway. So it's not a pipedream, it's a coming reality. For more on this, read the full WSJ report here.