Could Apple Tap into the Enterprise Wearable Ring Scanner Market?

Close to a year ago Patently Apple posted a patent report covering a newly invented wearable device in the form of a smart-ring. The patent application provided us with a grande overview of the possible applications and features associated with a smart-ring. Apple described the new device as being able to incorporate touch-sensitive surfaces, gesture sensors, voice recognition, a camera, a microphone and more. The Apple ring could one day be used with a smart TV, open an office/home or vehicle door, act as cursor for your MacBook, provide biometric readings and act as a scanner. Which brings us to the topic of the day. According to a new ABI Research report, wearable scanners could be a big niche market boosting business efficiency. Considering that Apple's iOS devices are used by nearly every Fortune 500 and Global 500 company, the Apple ring accessory may be able to assist companies take inventory quickly and much more.

ABI Research notes that "While consumers may immediately think of fitness trackers when they picture wearables, the devices are quickly migrating out of the gym and into the office, with the wearable scanner market experiencing rapid expansion.

Stephanie Lawrence, Research Analyst at ABI Research notes in the report that "Wearable scanners boost business productivity, offering workers a faster, hands-free alternative to the need for traditional hand-held scanners and paper picklists. Ring barcode scanners, glove scanners, and smartglasses are the most popular forms, which, depending on the device type, allow their wearers to scan barcodes, record processes, and access information without interruption."

Wearable ring scanners, such as those from Honeywell and Zebra, rely on a ring barcode scanner that connects to a wearable computer and allow the user to access and update information about the scanned product."

As shown below, the Honeywell finger scanner is a super clunky combination device. Compare that to using an Apple smart-ring wirelessly working with an iPhone and you could easily see how the Apple ring could find a new niche to tap into.

In fact, if you look at the Apple patent figure shown in our cover graphic, the position and angle of the ring face is positioned in a scanner like manner. I always thought that it was a strange placement for a ring below the knuckle, but not if it's able to be used as a scanner as is the focus of the ABI research report. 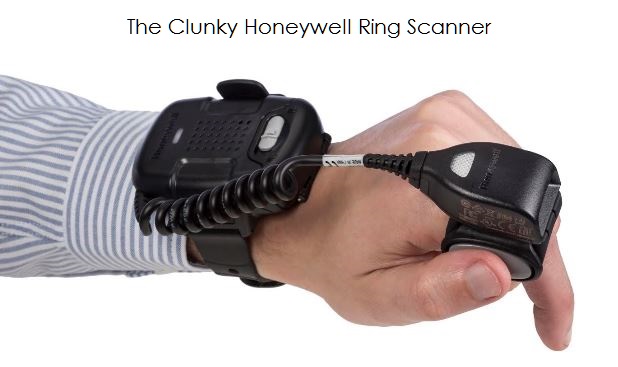 The ABI report further noted that "Glove scanners, from manufacturers like ProGlove, provide a tracking interface for wearers to record manufacturing procedures for better quality control. Similarly, smartglasses, such as Vuzix M100 and M300, ultimately offer guided workflows, allowing the wearer to receive assistance and new instructions when required.

As the devices begin to break ground across a wider variety of enterprises, ABI Research predicts more companies, including Amazon, Boeing, DHL, FedEx, IBM, UPS, and View Technologies, will invest in them. The warehousing, manufacturing, and transportation industries will see the largest adoption of wearable scanners for 2016 to 2021.

During this period, most of these companies will use the wearable scanners to scan barcodes on packages when they are picked, packed, and moved. In the long term, ABI Research expects these devices to improve efficiency and streamline workflow processes.

While Apple will likely focus on consumer applications for a possible future smart-ring, the fact is that Apple has made gigantic leaps into the enterprise market in recent years by partnering with IBM on MobileFirst, Cisco and SAP.

In the future we may see Apple Pencil work with an iPhone pro model and we may also see an Apple smart-ring work in industries that rely on efficient scanners. It may not be something that Apple necessarily focuses on but could assist their developers tap into another growing market niche. Either way, a future Apple smart-ring could be a viable new wearable device to keep our eye on.

One More Thing about Apple Wearbles

And one more thing regarding Apple wearables. Apple was noted in a new IDC China Wearable Device Market report published this week. Apple was the only foreign company to place on the top five vendors list. Of course once the Apple Watch series 2 comes to China, we're bound to see a nice bounce for Apple over the holiday quarter. Then again, with cheap $25 dollar wearables included in IDC's statistics, Apple won't be able to top that list as Apple doesn't participate in close-to profitless market segments that Xiaomi enjoys to bask in.