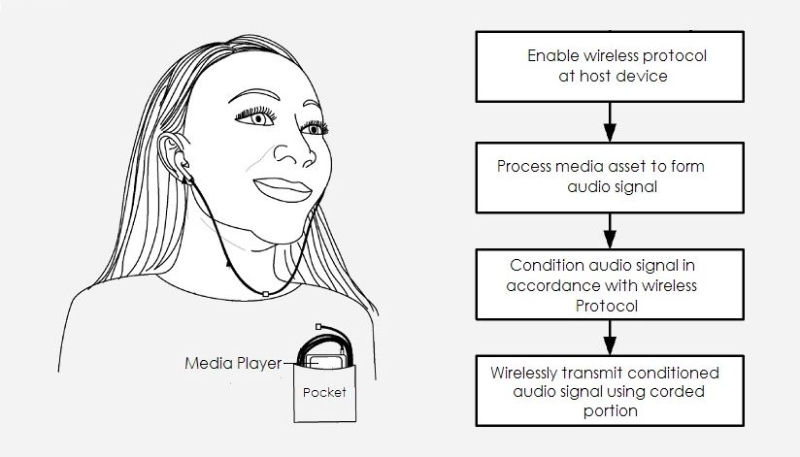 In late 2012 Patently Apple posted a report titled "Apple Invents New Headset with Unique Wireless Option." Apple's patent figure from that invention noted above clearly indicates that the "wireless" was only optional and temporary in nature – as in using the wireless EarPods option while working out at the gym for a set time. Of course consumers want wireless EarPods or AirPods that will last all day. According to rumor last week, AirPods landed in Russia, as noted in official certificate documentation. On September 1, an Apple patent application came to light covering new "in-ear speakers" that could be wired or wireless, according to their filing. Apple's patent focuses on a new balanced armature based valve that could provide "noise cancellation" quality. In a couple of days we'll be able to see if this invention was used in part or in whole should Apple's AirPods materialize.

According to Apple's patent filing, some users of in-ear speakers, such as the in-ear speaker shown in #106 below in FIG.1, may find the amplified or echo-like sounds created by the occlusion effect #100 to be annoying and distracting when they are listening to sound delivered by such in-ear speakers. Apple's invention provides several ways to mitigate or eliminate the occurrence of an occlusion effect. One way to reduce or eliminate the occurrence of the occlusion effect includes combining the in-ear speaker #106 in FIGS. 1A-1B below with an active noise control or Acoustic Noise Cancellation ("ANC") processor and its associated, error microphone, both of which are not shown in FIGS. 1A-1B. 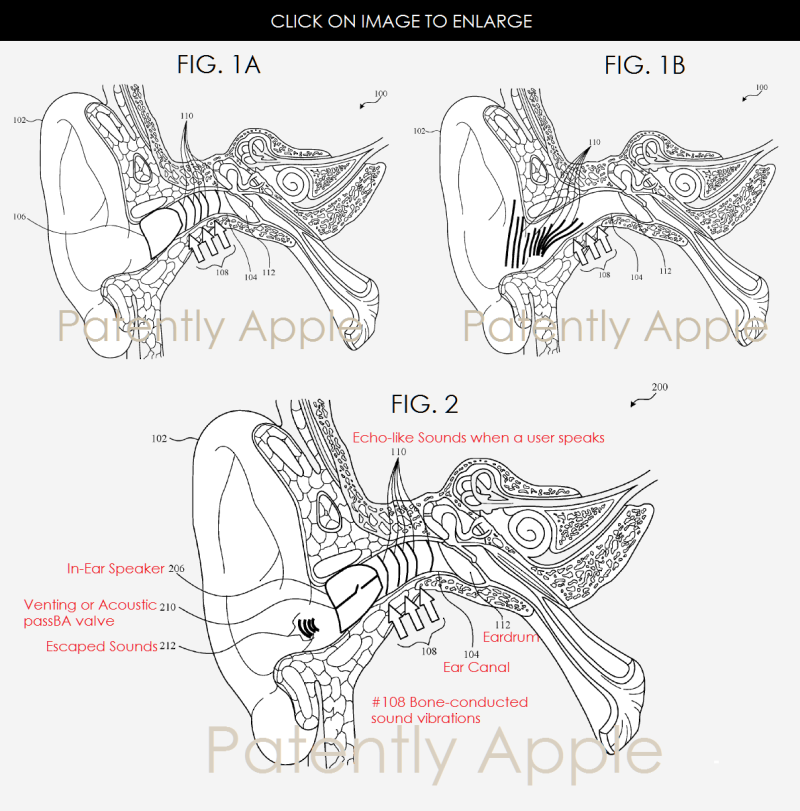 The error microphone can pick up the unwanted, amplified sounds #110 created by the occlusion effect, which are then converted to digital audio signals and processed by the ANC processor to create an anti-phase estimate of the unwanted, amplified sounds; the anti-phase estimate is then converted into a sound field by an acoustic driver of the in-ear speaker, in hopes of destructively interfering with and therefore reducing the unwanted sounds created by the occlusion effect.

Apple notes that "An in-ear speaker may be wired or wireless (for purposes of receiving a user content audio signal from an external device). In-ear speakers include, but are not limited to, earphones, earbuds, hearing aids, hearing instruments, in-ear headphones, in-ear monitors, canalphones, personal sound amplifiers (PSAPs), and headsets."

Apple's patent FIG. 5A presented below is a cross-sectional side view illustration of one embodiment of a Balanced Armature (BA) based valve #500. 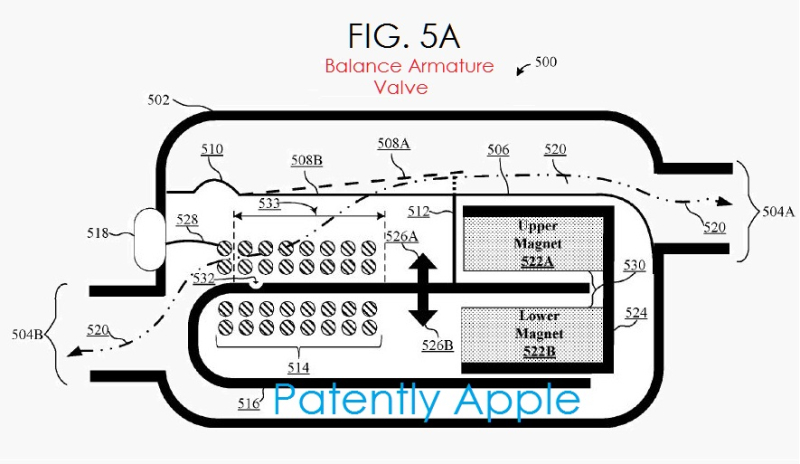 Apple further notes that "an in-ear speaker that includes the BA based valve #500 can enable manipulation of a listener's perceived audio transparency based on the opening or closing of the valve flap #508. When the valve flap is in the open position #508A, a listener can be made aware of auditory stimuli in his surroundings because sound waves from the ambient environment can travel through the housing #502 generally along a sound transmission path #520 that connects the two spouts 504A-B.

For this embodiment, the listener is still receiving ambient sounds, and as a result, his perception of audio transparency is enhanced. For one embodiment of an in-ear speaker that includes the BA based valve, when the valve flap is in the closed position 508B, the BA based valve acts as an ambient noise blocker, for a listener that does not want to perceive auditory stimuli from his surroundings.

For this embodiment, the listener will receive only the sounds that are being actively generated or produced by an acoustic driver of the in-ear speaker, which can be beneficial in certain situations. In this way, the BA based valve can enable a listener to reduce an occlusion effect when desired, become aware of sounds in the ambient environment when desired, or prevent sounds from the ambient environment from reaching the listener's ear canal when desired.

In another example, the listener is listening to audio from the external electronic device (e.g., a smartphone, a computer, a wearable computer system, etc.) using an acoustic driver that is in the in-ear speaker. When the sound sensor detects the listener's voice for a threshold amount of time, the logic determines that the listener (with the in-ear speaker in his/her ear) may be engaged in a phone/video call or a conversation with another human.

In this example, the logic provides the one or more control signals that cause the valve flap 508 to be opened, in response to the determination that the listener is on a phone/video call or in a conversation with another human. In this way, the sound sensor, the logic, and the BA based valve 500 assist with a reduction of an occlusion effect that can occur when the listener (with the in-ear speaker in his/her ear) is engaged in a phone/video call or a conversation with another physical human. As shown at the bottom of patent FIG. 17 above, the pathway #1701 can be the pathway used by the active vent system #1700. For one embodiment, the geometry of the pathway #1701 determines an overall effectiveness of the ability of the system to assist with reduction or elimination of amplified or echo-like sounds created by an occlusion effect, as well as, manipulation of perceived audio transparency.

For example, the pathway #1701 can have a predetermined geometry that assists with reducing an occlusion effect and also with reducing any unwanted energy that builds up in the ear canal due to activity (e.g. running, footfalls, chewing, etc.) Each volume can be designed with a constant cross section and can resemble a structure of various cross section shapes (#1703, 1705 and 1707).

Apple's patent application 20160255433 is richly detailed. To review it in its entirety, check it out here. Apple's acoustic design engineer Scott Grinker is noted as the sole inventor. Considering this is a patent application, it's unknown at this time when this invention will come to market.