Today, the U.S. Patent and Trademark Office published a patent application from Apple that reveals wearable sensors and, more specifically, to a network of wearable sensors for recognizing and tracking movements and exercises. Over the years Apple has filed many sport activity related patents that could be reviewed in our archives here. One of Apple's more elaborate sports related patents was acquired. With Apple Watch, Apple had built new testing facilities geared for testing sensors related to workouts and health statistics in general. Yesterday Apple introduced Apple Watch series 2 and introduced new features and a partnership with Nike once again with new "Apple Watch Nike+" system. Today's invention is one that is home grown and detailed in the extreme. Instead of limiting athletic sensors to running shoes for joggers, the new sensor system will expand and support sensors that could be worn by athletes of all levels to measure important workout data related to floor exercises, weight training, aquatics and more.

Sensors have been incorporated into a variety of user devices to provide enhanced functionality and new opportunities for user interaction. Motion sensors, light sensors, position sensors, magnetometers, and a variety of other sensors have been incorporated into mobile phones (e.g., smartphones), tablet computers, step counters, and other computing devices, allowing software developers to create engaging software applications ("apps") for entertainment, productivity, health, and the like. Some devices and apps have been developed to track walking, running, and other distance activities. Users can monitor such cardio training and keep track of their progress over time.

Such devices and apps, however, are limited in the types of exercise they can track. For example, step counters and distance measuring devices and apps are unable to recognize or track strength training exercises. People engaging in strength training (e.g., weight lifting and the like) may manually record workout logs in physical books or digital spreadsheets. Such tedious manual recording, however, can be unreliable, and very few people go to the effort of keeping detailed logs despite the potential benefits for progress tracking and workout optimization over time. Moreover, people engage in many exercises beyond cardio training or strength training, such as team sports, that can be significant elements of a fitness plan but are similarly tedious to record. Devices and apps are likewise unable to automatically recognize and track such physical activities, limiting their ability to provide a complete picture of user fitness.

Recognized physical activities or exercises can be tracked and recorded throughout a workout session. Additional sensors can also be used, including sensors in a mobile device or additional sensors worn on other parts of the body.

In some examples, certain sensors can be used to recognize exercise equipment to provide additional tracking data. Sensors can also include mechanisms to provide user feedback, and apps can likewise provide feedback and progress information to users in a variety of ways to enhance utility and improve the user's experience.

A network of sensors can be used to track the stance, position, movements, exercises, and the like of a user. One or more sensor devices can be configured for wearing, attaching, or carrying on different parts of a user's body. Sensor information gathered by the sensors can be communicated to a user device, such as a smartphone, tablet computer, central sensor device, or the like.

The sensor device (#108 of FIG 2 shown far below) can also include gyroscope that can be used to measure orientation, rotation, and the like. The gyroscope can be included instead of or in addition to an accelerometer. In some examples, the combination of accelerometer and gyroscope can allow for robust direction and motion sensing, allowing for accurate recognition of movement of the sensor device within a three-dimensional space (e.g., using three-dimensional coordinates, tracking displacement through three-dimensional space, etc.). Data from the gyroscope can be transmitted to a user device via Bluetooth transmitter (or another communication mechanism, such as radio frequency transceiver.

Apple's patent FIG. 3 noted below illustrates exemplary sensor devices configured for and placed on various parts of a body. 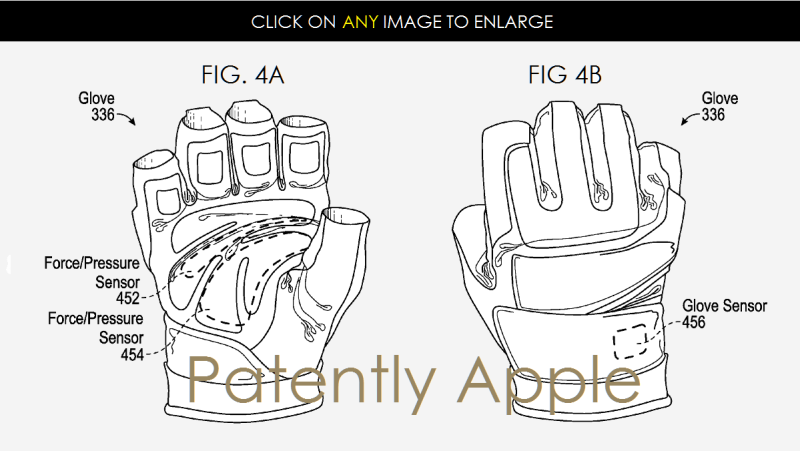 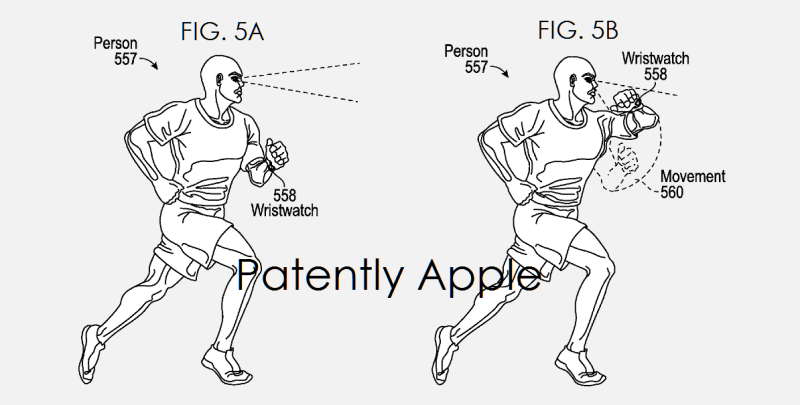 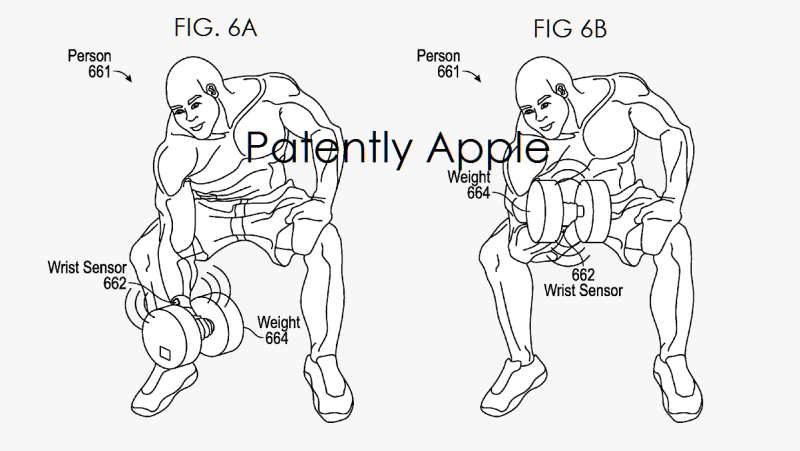 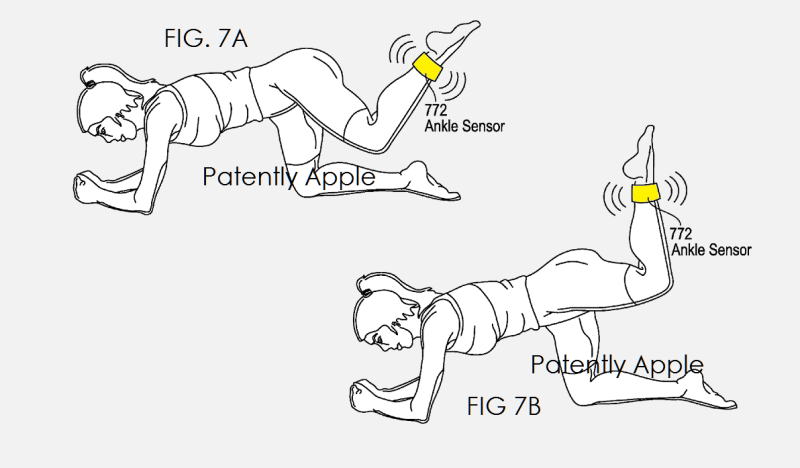 Apple's patent FIG. 11 below illustrates exemplary wrist and ankle sensors tracking body positioning of a diver during a front flip dive; Patent FIG. 2 illustrates an exemplary sensor device that a user can wear or carry. 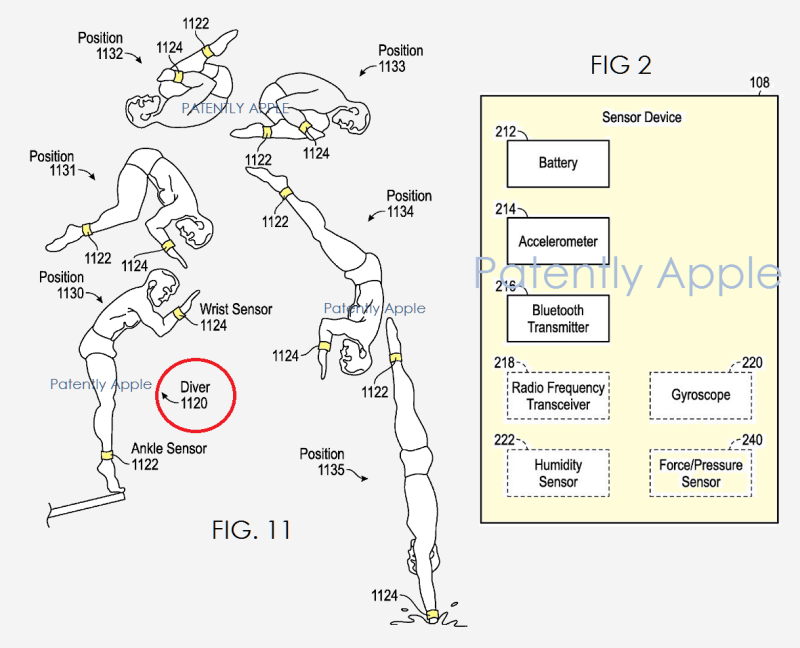 Apple's patent FIG. 8B below illustrates a weight machine with exemplary machine and control tags that can communication with a sensor device. 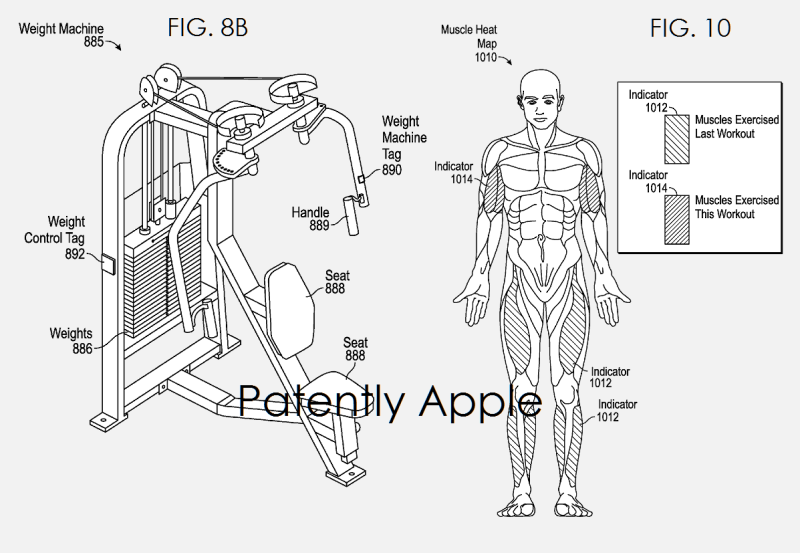 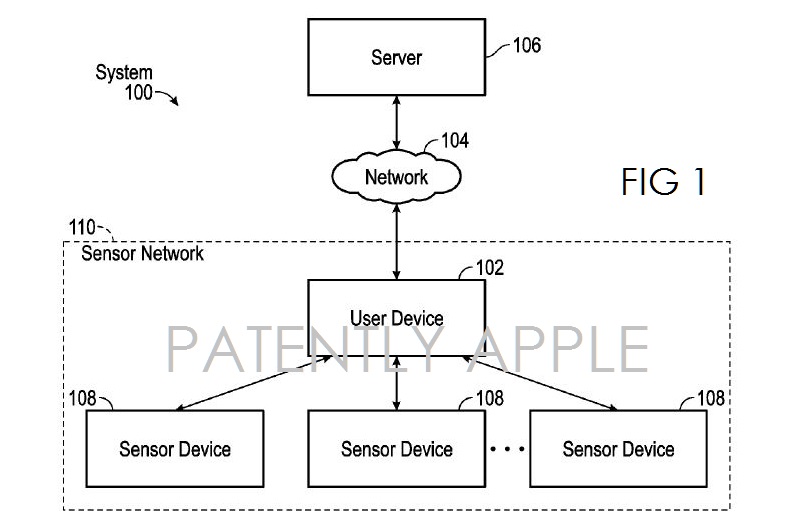 Apple's patent FIG. 1 above illustrates an exemplary system with a sensor network having multiple sensor devices that can be worn or carried on different parts of the body.

Apple notes that a user device could be carried in a pocket, clipped to a waistband, put into a pouch and could be an Apple Watch, iPhone, iPad, iPod. However, Apple notes that in some examples, a user can wear particular sensor devices during a physical activity without carrying or wearing a user device such as an iPhone.

Apple further notes that sensor devices can include any of a variety of sensors, such as accelerometers, gyroscopes, magnetometers, humidity sensors, temperatures sensors, pressure sensors, or the like. Sensor devices can also include any of a variety of transmitters, such as Bluetooth antennas, radio frequency (RF) transceivers, Wi-Fi antennas, cellular antennas, or the like for communicating to or with a user device #102 or with each other. Sensor devices #108 can also include a battery to power the sensors and transmitters.

In some examples, sensor devices can be built for durability, robustness, and the like for safe operation in a variety of environments (e.g., without damaging sensors, transmitters, or other components). For example, sensor devices 108 can be configured for safe operation in any environment, including cold, hot, wet, dry, high altitude, noisy (both audible noise and potentially interfering signal noise), etc. A user device can also include sensors, can be built for robustness, and can similarly be configured to be carried, worn, or attached to various parts of a user's body (e.g., carried in a pocket, attached in an armband, worn as necklace, etc.).

In still other examples, the user device and sensor devices can transmit information to and receive information from any other device within the sensor network #110, enabling both the transfer of sensed data as well as various measurements based on signals being sent and received (e.g., as in echo location, RF time of flight ranging, various triangulation schemes, or the like).